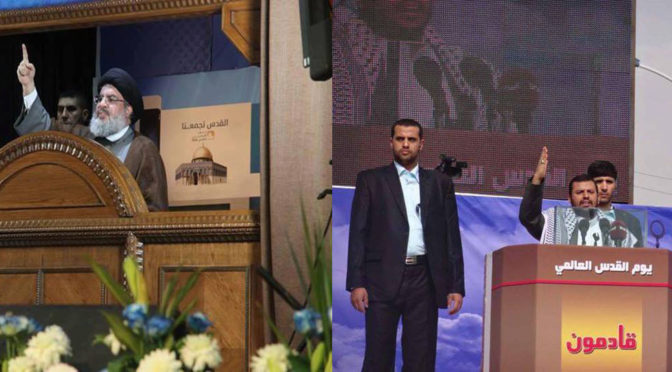 Heartwarming to the trillionth power. Sayyed Abdul Malik al-Houthi, the Striking Star and righteous leader of Ansarullah, the Yemeni Islamic Resistance, has congratulated Sayyed Hassan Nasrallah, the Guiding Light and saintly leader of Hizbullah, the Lebanese Islamic Resistance, on the martyrdom of Hajj Moustafa “Sayyed Zulfiqar” Badreddine, who was taken from us by Zionist-backed Takfiri goons. The significance of this beautiful gesture really can’t be understated. Sayyed Abdul Malik al-Houthi lost his brother, Sayyed Hussein al-Houthi (R.A.), on September 10th, 2004 to a cowardly, US-Saudi-‘Israeli’-backed Saleh regime air strike on the Mouqawamah giant’s sanctuary in the mountains of Saada’s Marran district. The Houthis refer to this horrific crime as “Yemen’s Karbala” and “Saada’s Ashoura”. Sayyed Hussein’s martyrdom reinvigorated their resistance, reinforced their steadfastness and solidified their identity as true Moustazafeen who were being transgressed against by the cruelest of Moustakbireen. Essentially, Sayyed Hussein al-Houthi had laid the groundwork for Ansarullah to become a force to be reckoned with years before, instilling Qur’anic Culture in his partisans and birthing the slogan which would be central to their ideology of Mouqawamism, but it wasn’t until his blessed sacrifice that their victory manifested into reality. So Ansarullah’s chief knows deeply and painfully what it is like to lose a moujahid, a friend and a brother as vital as Hajj Moustafa Badreddine. Undoubtedly, the closeness which has developed between Hizbullah and Ansarullah as well as the Lebanese and Yemeni peoples since the Wahhabi-Zionist-Imperialist war on Yemen began, is now going to skyrocket even further. Heroes unite with heroes, Resistance unites with Resistance, and the sons of Imam Hussein (A.S.) unite with the sons of Imam Hussein (A.S.) Just read Sayyed Abdul Malik’s words. Wonderful. Simply… Wonderful.

“With dignity and appreciation we received the news of the great Jihadi leader Moustafa ‘Sayyed Zulfiqar’ Badreddine’s martyrdom. Sayyed Zulfiqar was a knight whose lifelong Jihad was crowned with martyrdom after a righteous existence full of sacrifice and steadfastness for the sake of ALLAH (SWT). This dear knight carried the banner of the Muhammadi and Husseini convoy. We ask ALLAH (SWT) to accept him. Hizbullah, with its glorious path which is full of charity and sacrifice, will only become more victorious and blessed by ALLAH (SWT). These great sacrifices make these men of Resistance worthy of their sacred goal and their rightful position. This is the path which knows neither weakness nor surrender. The sacrifices made on this path know no bounds. Sayyed Nasrallah, we offer our congratulations to you for this martyr who triumphed and to your Party for this great honor. We also offer our condolences for the loss of this beloved man, and we ask ALLAH (SWT) to bless Hizbullah’s men of Jihad.”