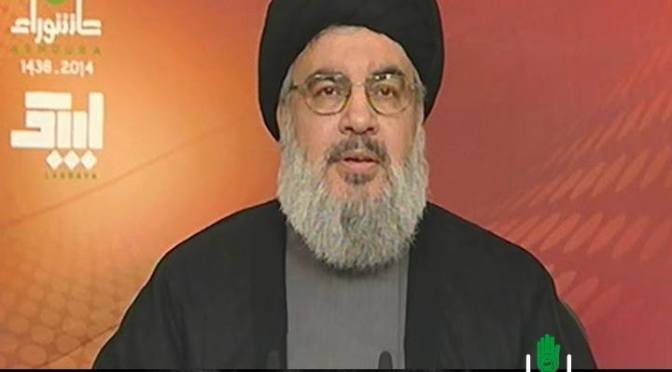 Sayyed Hassan Nasrallah’s recent Ashoura speech — which Mouqawamah Music excerpted just the other day via Al-Manar — was a blistering takedown of Wahhabi-Takfirism and it was quite possibly his most brilliant, in-depth denunciation of the twisted, perverted ideology yet, as he categorically broke down its dangers from the historical, cultural, political, military and security angles, as well as the increasing need for Sunni-Shi’a unity to confront it. Hizbullah’s Secretary-General also discussed the dangerous rise of atheism in the Arab-Islamic world, an obvious side-effect of the Takfiri sickness afflicting the region and yet another issue that requires steadfast and committed Sunni-Shi’a unity to tackle and ultimately defeat it.

At one point during the speech, the living Resistance legend refers to the “Jewish occupation of Palestine” before immediately changing his phrasing to the “Zionist occupation of Palestine”, and then subsequently quipping that he doesn’t want to hear anyone yell “anti-Semitism”. This reflects Nasrallah’s suaveness, charisma and abyssal understanding of geopolitical affairs, as he has never shied away from  blasting Jewish power by name in any instance previously, but there is indeed a time and place for everything.

The real highlight however was the Sayyed pointing the finger directly at the House of Saud — as he did in the wake of the Saudi-backed Takfiri attack on the Iranian embassy in Beirut last November — for the growth of the Takfiri Frankenstein. He made it clear that stopping its dissemination rested squarely on Riyadh, due to the Saudis providing Takfiri groups with extensive financial and governmental support since they arrived on the regional scene. On top of being an important polemic on the thought process which ISIS and like-similar groups operate with, Nasrallah’s speech was also a powerful reminder that Hizbullah — contrary to the imbecilic remarks and pseudo-analyses of its sectarian opponents who constantly refer to it as an “extension” or “proxy” of Iran, which is currently in a rocky state of detente with the Saudi regime — is an independent movement which has no problem calling a spade a spade, diplomatic niceties be damned, when something so dear, nay, FOUNDATIONAL to its very being, namely Islam itself, is under existential attack from US-“Israeli”-backed forces. Labaykah ya Nasrallah!