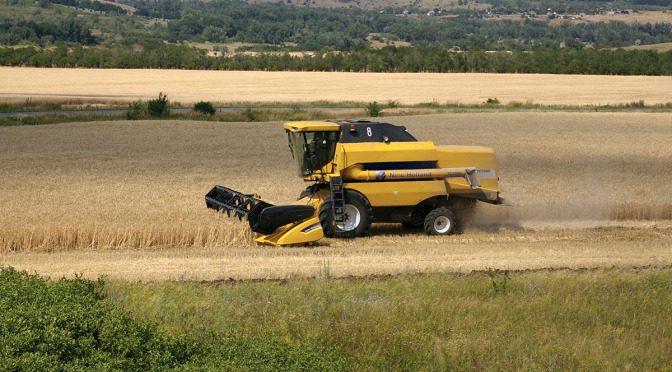 (Business New Europe – bne.eu – October 21, 2014) – When Russian President Vladimir Putin cut off European Union imports of agricultural products earlier this year, one of the rationales was to give a boost to the badly underdeveloped domestic sector – and it seems to be working. September’s retail and investment numbers were down but agricultural production soared by 16.8% year-on-year in September, according to Rosstat.
“Domestic demand in Russia remained sluggish in September, retail sales, which reflect household consumption, edging up 1.7% year-on-year. This is slightly better than what we saw in summer and puts the nine month tally at 2.3% y-o-y,” Alfa Bank’s chief economist Evgeny Gavrilenkov said in a note on October 20. “Conversely, the agriculture sector posted extremely strong growth of 16.6% year-on-year in September and 7.7% in the first nine months of this year. Combined with strong industrial output growth last month (2.8%), driven by import substitution, this should lead to improvements in basic sector output.”
Agriculture has become a key sector in the Kremlin’s import substitution programme. Despite being a top three world exporter of grain and home to the “Black Earth” regions, some of the most fertile land in the world, Russia continues to import about 40% of its food. It has deficits in raw milk, potatoes, pork and beef to name a few products.
And Russia completely fails to make any of the added value products like posh cheese or cured meats: why invest in complicated food processing products when it is easier and cheaper to simply import them from Europe? In Moscow the problem is particularly acute, with some 60% of food products imported last year.
Russia’s food industry came under even more pressure after Russia acceded to the WTO in August 2012. Pork producers in particular immediately felt the squeeze after duties on European’s higher quality, lower cost imports were phased out as part of the deal.
But that problem has gone now after the shops were cleared of this competition, leaving a giant gap in the market that the state is hoping local producers will rush to fill. Indeed, the spike in food prices is causing a macro problem as inflation soars, but the Kremlin must be hoping the food companies are using their extra money to improve their production and that their increased market shares will be permanent when the sanctions regime finally comes to an end.
The Kremlin turned the screw on Europe again this week by adding more products to its own sanction list. The federal supervisory agency for agriculture, the Rosselkhoznadzor, said “temporary restrictions” will go into effect this week on European beef and pork offal, as well as beef, pork and chicken fat.
The agency said it imposed the ban because “banned and harmful substances,” including antibiotics, had been found in these meat products and byproducts. It did not identify the other substances.
“We reiterate our view that the economy is adjusting to the new environment. Economic growth has slowed, but it is not stagnating or contracting,” writes Gavrilenkov.