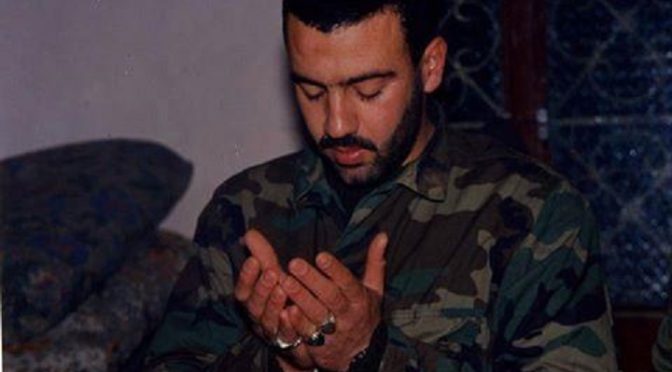 Politically and Islamically, comparisons to royalty aren’t really ideal but Hizbullah Commander Al-Hajj Qassem Khaled Bazzi (R.A.) truly was the Prince of the Battlefield. Martyred on this day 12 years ago in an ‘Israeli’ drone strike in his hometown of Bint Jbeil at the height of one of the key battles of the July War, he was a fearsome warrior who exemplified all of the qualities we’ve come to know and love about the Lebanese Islamic Resistance and then some. Steadfast, committed, patriotic and Husseini with a brilliant military mind, Bazzi spearheaded the operation that saw two ‘Israeli’ occupiers captured and eight others sent to the hellfire just before the aggression began in Summer 2006. The bodies of two of those Zio-terrorists, Ehud Goldwasser and Eldad Regev, were ultimately utilized by Hizbullah as bargaining chips to free Hizbullah Commander Samir Quntar (R.A.), monumental Hizbullah intelligence operative Nissim Nisr and hundreds of other Lebanese and Arab abductees in the epic prisoner exchange with ‘Israel’ in 2008. Speaking simply and directly, it was the hands of Bazzi who ripped off the shackles of the Dean of the Liberated Detainees From ‘Israeli’ Prisons (Quntar)–two years after his martyrdom like the Bint Jbeil native accomplished the feat from beyond this realm. Subhan’ALLAH.

Bazzi was one of the leaders of the battle of Maroun al-Ras and instrumental in evacuating a dozen Hizbullah fighters when the Resistance strategically withdrew so focus could be put on Bint Jbeil. And it was there, in the Capital of the Liberated South, where he’d be called home by ALLAH (SWT), as he fought ferociously to prevent the fall of the town to the enemy and told his men that he’d only leave as a martyr or a victor. Turns out that he died as both. The accursed Zionist entity’s “Operation Webs of Steel 2” was rendered into nothing but a pile of molten scrap metal and it was Khaled Bazzi’s blood that paved the way for this awe-inspiring victory.

Being immersed in the Culture of Resistance from the time he was a boy, as many of his family members had worked closely with the Palestinian Resistance and several of his friends had survived the torturous horrors of Khiam Detention Center, Bazzi’s SOLE destiny was Mouqawamah. In 1985 he had gone to university and contemplated becoming a doctor or a lawyer. Unable to shake the inherent drive to defend Lebanon from the Zionist defenders however, he dropped out, began fighting with Hizbullah and never looked back. From early on, his impact reverberated throughout the nation. He was a participant in the Baraachit operation in which Hizbullah smashed an SLA contingent then drove the ‘Israeli’-provided military vehicles of the collaborators all the way to Beirut in a show of defiance that shocked the enemy and its tools. He was known for his craftiness in placing explosive devices that literally sent shockwaves through enemy positions in Houla, Markaba, Al-Abbad and elsewhere. Al-Hajj Qassem nearly sent IOF Brigadier General Eli Amitai to Jahannam twice, hurting him badly towards the end of 1996 and forcing him to flee Lebanon afterwards. He also helped assassinate SLA deputy chief Aql Hashim just a few months before the 2000 Triumph. And, perhaps MOST notably, he was one of the architects of the famous Ambush of Ansariyeh that DEVASTATED ‘Israel’ more so than maybe any other Resistance operation during the years of occupation.

The saying usually goes “long live the king”. But in this case, it would be LONG LIVE THE PRINCE–The Prince of the Battlefield. ALLAH yerhamak Al-Hajj Qassem. Because of you, the colors of the rainbows seen over the Jnoub’s mountains are brighter; the skies are bluer; the sea’s waves are calmer; the sunshine is warmer; the birds fly higher; the olives and grapes grow tastier; and the Lebanese Islamic Resistance fights stronger. Your biological children Zaynab, Muhammad and Ali carry on your name and your legacy. And your spiritual children, those sons of the South, the Bekaa and Dahiyeh who fight today on multiple fronts like shimmering reflections of you will never allow you to be forgotten. As if you even could anyway! The flame of Khaled Bazzi and all of his Mouqawamist achievements burn far too powerful to ever be extinguished.