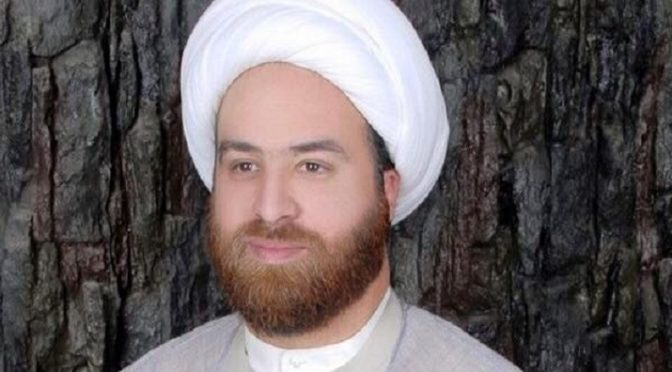 Pains me greatly to say that Sheikh Rafid al-Gharebawi, a native son of Karbala as well as one of Iraq’s fiercest lions and most knowledgeable young moujtahids, has been martyred. The bloodthirsty killers of MossadDaesh kidnapped Shahid Rafid with the hope of extracting intelligence on numerous groups within the Iraqi Popular Mobilization. But the Sheikh, despite the torture that would be inflicted upon him by these demented Wahhabi monsters, refused to break and maintained silence even though this spelled his end. ISIS, infuriated with its failure, shot him in the head and then dumped his body on the streets of Baghdad. The Takfiri bastards of Yazid (L.A.) failed to realize that they were dealing with a man who knew only the way of the beaming, burning light that is Ahlul Bayt (A.S.), and there was nothing, literally NOTHING in the world that they could do, no matter how depraved, which would force him to deviate from his principles. The terrorist children of Yazid (L.A.) failed to realize that they were in the presence of a man who knew no other path but that of Imam Hussein (A.S.), whose motto was “Death with dignity is better than life with humiliation”; and there is no greater dignity than defending one’s people until life ceases to reside in one’s body. His sanctified sacrifice bears witness to this.

Sheikh Gharebawi was a spiritual guide to Kata’ib Sayyed al-Shouhada, Harakat Hizbullah al-Nujaba, Kata’ib Hizbullah, Asa’ib Ahlul Haqq, the Abou Fadhl al-Abbas (A.S.) Brigade that defends the Sayyeda Zaynab (A.S.) shrine in Damascus and the Imam Ali (A.S.) Brigade led by everyone’s favorite Iraqi fighter Abou Azrael. The Sheikh was an exceptionally brilliant mind, both religiously and politically, and played a major role in not only keeping the various units of Hashd al-Shaabi fighting in unison but also galvanizing them on and off the battlefield. Shahid Rafid hoped to one day become an Ayatollah, and nothing meant more to him than Iraq achieving true sovereignty by expelling ISIS as well as its Zionist-Imperialist creators. Now it is the moujahideen he once advised and taught who will have to fulfill this dream in his memory.

Truly, Sheikh Rafid al-Gharebawi lived like Muhammad (S.A.W.W.), fought like Ali (A.S.) and died like Hussein (A.S.), achieving martyrdom and locking himself in as a hero to be celebrated by both Iraq and the Arab-Islamic world as a whole. He will NOT be forgotten and he WILL be avenged. Rest in power ya Shahid, the Acolytes of Ashoura shall not allow your blood to be spilled in vain.