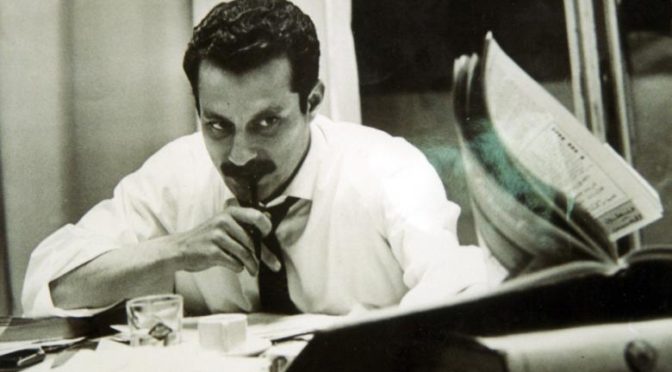 If anyone doubted that the power of the written word is an existential threat to the “chosenite” power structure toxifying God’s Green Earth, then you must not have heard of Ghassan Kanafani. On July 8th, 1972, in fear of how his writings were profoundly inspiring Palestinians, the Kidon unit of the usurping Zionist entity’s Mossad, an international death squad masquerading as an “intelligence service”, detonated a car bomb in Beirut and slaughtered one of the greatest writers in Palestinian as well as modern Arab-Islamic history. From “Men In The Sun” to “Returning To Haifa”, “A Land Of Sad Oranges” to “The Revolution of 1936-39 in Palestine”, “The Apricots of April” and so, so many more, there was no genre that Kanafani dabbled in that he didn’t absolutely own with a brilliant, fluid, unique authority; that he didn’t utterly slay like it was a descendant of the supremacist thieves who stole his country. The novel, the historical, the essay, the poem, it didn’t matter; Kanafani’s ink made anything and everything glow. The martyred PFLP leader’s words were as pristine as they were powerful, as gorgeous as they were militant, as whimsical as they were raw. He didn’t write books; he channeled eternity through his pen. Every page that he completed was a sword of distinctive forging that struck blows on the false crown of Jewish Cultural Imperialism and drew blood from the invaders. For every part of Palestinian history, culture and identity that the Zionists diminished, expropriated and outright destroyed in all their Old Testament-fueled madness, Ghassan Kanafani managed to miraculously bring it all back to life through his phantasmagorical prose, as if ALLAH (SWT) had infused his quill with the essence of Nabi ‘Uzayr (A.S.) and Al-Khidr (A.S.), the Eternal Life Prophet.

He never participated in battlefield operations, but he was as fierce as any moujahid; the gun was not his weapon of choice, but the shots he fired via his writings were as deadly if not deadlier than the AK-47. The Holy Prophet Muhammad (S.A.W.W.) famously said that the ink of a scholar is more precious than the blood of the martyr. And what of those rare instances when they merge? Indeed, when the ink of the scholar-poet and the blood of the martyr mesh as one, you then have a special personality who is capable of leaving an impact among the Moustazafeen that ripples perpetually through time and space. That was Ghassan Kanafani. And though the ‘Israeli’ cancer killed his body, his ideas, etched in the Kuffiyeh-like fabric of forever through his luminous writings, will never die. One day ya Ghassan, one day soon, the Land of Sad Oranges will have its vibrancy and happiness restored, from the River to the Sea, without even a single Zionist usurper in sight. One day soon you and all of Palestine will have justice.