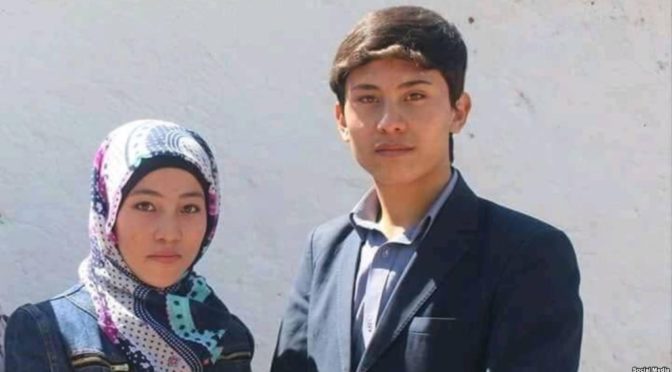 Say salaam to Farzana and Atta Rahimi. They’re 19-year old identical twins from the Afghani Hazara Shi’a community that dwells in the poor Kabul suburb of Dasht-e-Barchi. They were murdered in cold blood 72 hours ago when a Takfiri terrorist from US-‘Israeli’-backed ISIS blew himself up inside a classroom of Mawoud Academy. They were two of 48 martyrs. 67 of their classmates were also wounded in the atrocity. Staying up every night until past 2 o’clock in the morning to bang out their studies, Farzana and Atta were the first ones in their family to finish regular school and also the first ones to enter university. The young woman was exceptionally bright and she aspired to be a teacher so she could raise up the next generation and truly give back to Afghanistan. Her brother was equally intelligent–already an accomplished student journalist, covering social and cultural matters for local news outlet Farhang. He ultimately was looking to become a lawyer. They were born just 15 minutes apart. Inseparable and best friends according to their father, Hassan. Farzana and Atta were martyred together… At the same desk. Can you feel your heart fragment? Can you feel your eyes hitting maximum capacity on the Richter scale? What about your soul? Do you feel the pit within? Only a cadaver… Or an ‘Israeli’… couldn’t. May they find joy in the Akhira, a place much more suited for the pureness they exuded–as opposed to the Nightmare Incarnate that this current life has become.

The Zionist media too often speaks of pain in the Islamicate — and any other region where the United Snakes of IsraHELL is opposed, like Ukraine’s Donbass, Venezuela, Bolivia, etc. — as if this and only this is what our lives are supposed to be. Our martyrs are faceless. Story-less. Dream-less. Devoid of humanity. Just numbers. “If it bleeds, it leads” rules the day like the sole purpose of our existence is to die excruciating deaths and make sure the Parasites who own and run the corporate press have ammunition they can twist and manipulate for mass Goy consumption. We’re not people. We’re commodities that World Zionism buys and sells depending on whether or not our agony can be utilized in such a way that it bolsters the push for a JNWO. Even in the Resistance Camp, due to the need to analyze matters in the bravest and most accurate way possible — i.e. naming Shlomo and his kapparot-performing wackjob cohorts as the globeholders — we too can lose sight of the people we’re actually advocating on behalf of and what makes/made who they are/were. We get lost in the fight. We have to do better. We have to do more. Nothing honors the Fallen-Yet-Risen like telling the truth about what happened to them and showcasing the identity of their killers–false claims of “anti-Semitism” to the garbage along with the ‘Israeli’ tumor itself. That is indeed the case.

But sometimes, above and beyond that, simply relaying what their lives were like prior to the flashpoint of martyrdom can be enough. From beyond the grave… Ascending over the chaos… The Martyrs speak for themselves. A potential teacher and a future lawyer slaughtered in a display of unadulterated savagery by Shi’a-hating terrorists bankrolled by the Washington ZOG and “Tel Aviv” to bring Oded Yinon’s plot to Afghanistan and wreak a little havoc on Pakistan, Iran and Russia. What stronger condemnation of ‘Israel’, America and ISIS do you need…. than THAT? Farzana and Atta won’t be forgotten. Nor will any of the Mawoud Academy Shouhada. The Monsters may want to “blot out the memory of Amalek” but we refuse… We ABSOLUTELY… REFUSE… under any and all circumstances… to let them. Insha’ALLAH.