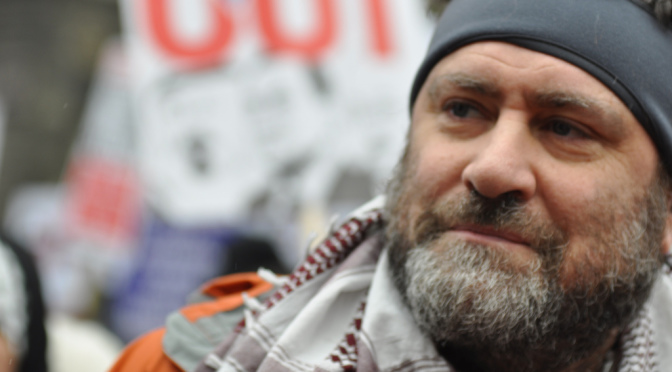 His criticisms of his own former Jewish ideological collective are brutally honest and hard-hitting. Let it suffice to say that his mission to liberate the discourse has led him far, far from the world of “political correctness,” yet he somehow balances all this with a successful career in jazz.

In fact, Atzmon has sacrificed much in the line of his music career for his writings and statements against Israel. When he first moved to the UK, he was given the 2003 BBC award for “Best Jazz Album,” for Exile, and was practically given the key the the City of London. He was being hailed as one of greats of jazz, before the establishment caught on that Atzmon was not one of them.

Atzmon is a Heidegger-ian German essentialist. He easily dismantles his detractors’ arguments with his own swift brand of rhetorical Judo, exposing any discourse-policing closet Zionists that Atzmon has dubbed the “anti-Zionist Zionists,” viewing them as the premiere reason why humanity has been failing to solve it’s most important problems.

To the utter frustration and helplessness of the establishment, Gilad’s criticisms of Jewish identity politics and Israel are being accepted gradually into the mainstream. Perhaps it is because their time has come. Despite his views, he has played with many famous mainstream musicians, most recently with the likes of Pink Floyd, on their latest album, “The Endless River.”

Clearly he has emerged victorious over those who endeavor to silence him.

Bear in mind that other public figures so far have been systematically ostracized and blackballed for the mere mention of the word “Palestine.”

Like his friend, comedian Dieudonné, Gilad’s artistic mastery only fortifies his credibility as an intellectual. This has caused a huge, pounding, migraine headache not only for the hawkish pro-Israel establishment, but also its aforementioned gatekeepers, media outlets like Max Blumenthal, the UK Guardian, Ali Abuminah, and “Jewish Voices for Peace,” whose subversive agendas have been laid bare in the hundreds of articles Atzmon has penned.

Those things being said, we may now lower the needle on “The Whistle Blower.”

The first song on the album, “Gaza Mon Amour,” enters with drummer Chris Higginbottom playing a Middle Eastern groove which sounds informed by New Orleans second-line. A palm-muted piano rhythm pattern enters, and Atzmon makes his entrance with a Middle-Eastern alto melody, doubled by his own accordion. “Gaza Mon Amour” makes one imagine walking through a busy Gaza City marketplace.

In the solo section, the piece slowly transforms into some passionate, far-out Coltrane/McCoy Tyner-influenced excursions from Atzmon and pianist Frank Harriman. Atzmon’s sound at the beginning of his solo is breathy and sorrowful, like the voice of a lamenting Palestinian grandmother, before transforming the sorrow to power by invoking Coltrane’s theme from “A Love Supreme.”

Even when Gilad is in Coltrane mode, he retains a finesse and a hard-driving bebop sensibility to his lines and time feel that is more akin to Cannonball and Sonny Stitt than the more open articulations of Trane. Atzmon combines long wailing notes with fast, spiraling, harmonically superimposed lines, and with Harriman’s comping, the landscape turns into a turbulent seascape of rising and falling waves.

Then the album opens up to a series of diverse ballads, some being sorrowful, some yearning, some romantic. Gilad and band resist any urge to play cliched lines or practiced vocabulary, preferring instead to take the more modern, lyrical, thematic approach to developing the motifs in their improvised solos.

Pianist/keyboardist Frank Harriman is skilled at creating a balanced dialogue between the chords of the left hand and the intervallic themes he often develops with the right hand. On several songs, he uses lush strings or bubbly organ sounds for effect. Influences of jazz piano’s best, McCoy Tyner, Herbie Hancock, and Chick Corea can be heard in Harriman, but he has his own thoughtful voice at the keys.

Bassist Yaron Stavi has masterful ideas, impeccable touch, intonation, timing, and tone. His lines are clear and always supportive, and one can tell that he is always listening to the band as a whole.

“The Whistle Blower” is very beautiful, accessible and romantic, without crossing the line and being corny. Atzmon’s music, similar to what his writings have done, does much to rescue jazz from its own elitist tendencies.

Atzmon’s music is similar to his philosophy. He seems to be attempting to put the world back on track. As a philosopher, this means he must illuminate the world’s problems and pave the way for unhindered discussion. Against all odds, he must dive into the heart of Jewish identity, publicly and resoundingly reject its exclusivity and supremacism, and encourage people to embrace a universal morality where no one designates himself as “chosen.”

Interestingly, jazz, despite its earthy roots, has the same tendencies, to relentlessly push itself toward extremes and oblivion. Arguably, it needs someone to remind the populace that it is always about beauty, harmony, and that which is universal, and Gilad does just that. Five Stars  for Gilad Atzmon and The OHE for “The Whistle Blower”! *****