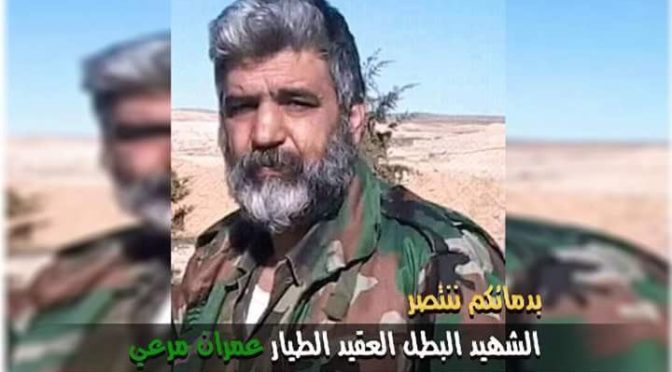 2) ‘Israel’ is scared stupid of the Syrian-Iranian-Lebanese-Iraqi presence in and around Al-Jaulan.

This aggression coupled with the evacuation of the terrorist White Helmets has brought the criminal and preeminent role of the usurping Zionist entity in the conspiracy against Syria glaringly out into the open. There is no “limited intervention”, let alone “nonintervention”. There is no “neutrality”. The illegitimate Jewish “state” organized the “revolution” to start with and wants Syria crushed along with the Resistance Axis ejected. But this war has truly exposed all. It started with Hizbullah liberating Al-Qusayr and Tal Kallakh followed by the Qalamoun Mountains. Then the Syrian Arab Army’s Tiger Forces spearheaded the restoration of Palmyra. Then Kessab along with all of Lattakia. Then the mother of all setbacks for the “chosenoid” Imperium–the freeing of ancient Aleppo. Then Homs. Then Deir Ezzor, led by the ultimate warrior General Issam Zahreddine (R.A.) Then all of Damascus. Just last week, Daraa. ‘Israel’, despite untold billions spent by it and its NATO-GCC allies–not to mention political capital and manpower–simply cannot protect its head-chopping puppets forever. Nor can it turn back the inevitable. Syria will achieve a final victory in the battle against Takfiri terrorism and then it will set its sights on what rightfully belongs to its people… That which was stolen in 1967 and then illegally annexed in 1981: The Golan Heights. Enjoy your theft while you can, o’ Zio-vermin, the end of the line is staring you right in your repulsive faces.

Rest in sweet serenity once more to Colonel ‘Umran Mari. You could’ve retired and enjoyed life with your family on the crystalline beaches walked on by your ancestors but instead chose to defend your homeland against the enemies of humanity. A legend among legends. A hero among heroes. An inspiration among inspirations. We will rumble onward to the liquidation of ‘Israel’ in your blessed honor.