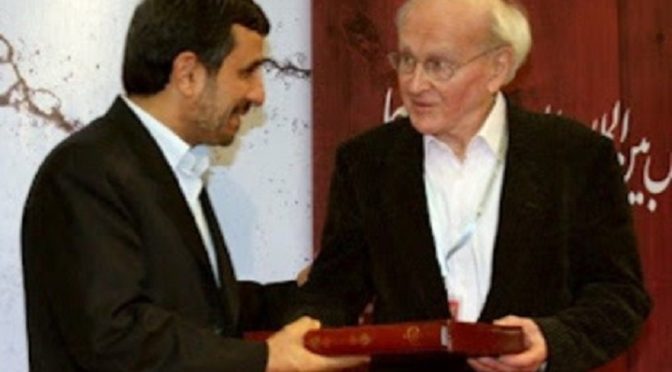 One of this epoch’s greatest truth warriors has departed this world for the greener, lusher pastures of the Afterlife: Dr. Robert Faurisson. The Scottish-French fire-spitter, who has been standing at the forefront of challenging the “6 Million Died” myth and the international “chosenite” cult that propagates the fallacy for four decades, collapsed in his Vichy home yesterday evening after returning from a revisionist gathering in the UK where he spoke with his usual fiery wit and analytical brilliance. His heart simply came to a stop. That his death comes on the heels of one more challenging of the Zio-driven, globally-enforced narrative about WW2, one more punch in Shlomo’s hideous face, is fitting for the life of a legend.

For his principled commitment to the truth and vociferous, undaunted opposition to Global Zionism, Faurisson was viciously attacked in 1989 by a group called the “The Sons of the Memory of the Jews”–undoubtedly a front for the Mossad itself or the Mossad-backed JDL–beaten to a bloody pulp and hospitalized with a broken jaw. That was just one of at least ten physical attacks on his person by Jewish extremists between ’78 and ’93. He was dismissed as Professor of French Literature at the University of Lyon after almost 20 years at the post. He was prosecuted, convicted and fined on multiple occasions under France’s Halakhic-Talmudic-Orwellian Gayssot Act–a “law” that isn’t a law at all but an unabashed death-knell for free speech. And you know what he did each and every time he was forced to pay because Paris is a ZOG and pathetically subservient to Organized Jewish Interests? He framed the checks. That’s right. The man… FRAMED… the checks. Masha’ALLAH! That was Faurisson in a nutshell. Battered and bruised but never broken. Dogged and denigrated but never one scintilla less determined. Savaged and slandered by history’s greatest oppressors who have history’s most extensive disinformation networks at their disposal but steadfast as salmon swimming upstream.

The way that Dr. Faurisson operated, it was like the more sacred the cow, the stronger the need to slaughter it for there was nothing sacred about it in the first place–it was just meat. That’s why he stood side-by-side with Ernst Zundel in both 1985 and 1988, serving as a devastatingly eloquent expert witness for the defense and getting the inability of the Zionists to prove even the smallest shred of their Holofraud story on record. He proved time and time again that there were no “homicidal” gas chambers and perhaps even more important than his own personal contributions, he laid the groundwork for the Leuchter Report, which solidifies beyond a shadow of a doubt that the “gassings” hasbara is rooted solely in falsehood. The horror stories from Treblinka? He thrashed them as just that–horror stories, not facts. The Diary of Anne Frank, held up by the ZOGified West as a relic of sorts? He obliterated it as a fiction–and a fiction it most certainly is. The alleged mass murder at Sobibor and Belzec? Never happened either. Every element of the Holocrock that he put his pen towards in investigation turned to dust. And he did so while maintaining sincere solidarity with the Palestinian cause and all people–both Western and Eastern–living under the yoke of Jewish supremacist hegemony. It’s why he and genius Anti-Zionist comedian Dieudonné, himself a major target of Chaim and Moshe Inc., got along so famously.

In 2012, Dr. Mahmoud Ahmadinejad, then the Islamic Republic of Iran’s President, presented Dr. Faurisson with 1st Prize at the 30th International Film Festival in Tehran for courage, strength and force. A most appropriate accommodation for even more appropriate reasons. Faurisson the Flamethrower has indeed showed the truest grit in his pursuits and he assuredly had more–as Dr. Ahmadinjead put it–courage, strength and force in his baby toes than all of the Jews who made his life a living hell over the years have in their entire bloodlines and family histories. Moreover, he has more courage, strength and force than an unfortunately large amount of Muslims who, whether out of fear, expediency, leftistani brainwashing, Judeophilia or a combination of all of the above, lap up the Holobollocks like kittens lap up milk from a saucer instead of rebuking it for the pile of deceptive puke that it is. Verily, it’s both sad and shameful that Muslim activists chose to largely disassociate themselves from the Dauntless Doctor because of ancient allegations of him being connected to the OAS, a French colonialist terrorist organization–allegations that were false. Interestingly enough, the Zionist media brings up at every turn. The yolk’s on their faces though… Because ‘Israel’ was a strategic partner of OAS, which had its very own Jewish faction, was trained by Irgun and financed by the yeshiva-like corporation at the heart of JFK’s assassination, Permindex.

Speaking of the Zionist media, from the JTA to the Forward, the NYT to Breitbart and many, many others, it is rife with obituaries today and none of them have much else to offer other than to tell their readers that Faurisson was a “Holocaust denier” and an “anti-Semite”. The viler among the presstitutes, i.e. the Algemeiner, which once came after me at B’nai B’rith’s behest over my support for Syrian President Dr. Bashar al-Assad and, typically, “Holocaust denial”, had this for a headline, “One Less Holocaust Denier on This Earth”–a quotation of Jewish mob lawyer and Mossadnik Abe Foxman. Truly however, in this age where degeneracy is decency, upholding a terrible fallacy is “patriotism” and “humanitarianism” and criminals part of a genocidal, tribalistic, subversive, chauvinistic and warmongering collective are “God’s chosen people”, there are no greater and more satisfying badges of honor to wear–and proudly so–than “Holocaust denier” and “anti-Semite”.

At the end of the day, Dr. Faurisson was a luminary. And a hero. In 1980, he put forth these 60 words to describe the “Holocaust” in such a damning and succinct way that it is yet to be duplicated by anyone to this very moment, “The alleged Hitlerite gas chambers and the alleged genocide of the Jews constitute one and the same historical lie, which made possible a gigantic financial-political fraud, the principal beneficiaries of which are the ‘State’ of ‘Israel’ and International Zionism, and whose principal victims are the German people — but not their leaders — and the entire Palestinian people.” They ring out with even more veracity today. We conclude by saying that the Zio-demon Abe Foxman couldn’t be more wrong. There isn’t “one less Holocaust denier on this Earth” with the death of Dr. Faurisson because whilst not physically here, he is still very much alive and kicking. In his writings. In his lectures. In his deeds. In all those he inspired–of which there are more than International Jewry thinks. Striking Star Salute to the Valorous of Vichy! You were right, o’ Hakeem (doctor/wise one)! The “Holocaust” is, hands down, the biggest lie of the 20th century! And we’ll keep screaming it from the rooftops ’till all of Gentiledom knows it!