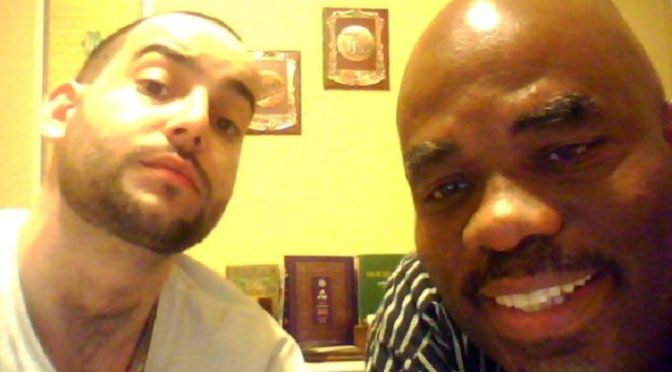 Earlier this year on February 17th, the most important African-American Muslim thinker since Malcolm X (R.A.) and one of the foremost Islamic liberationist revolutionaries on the entire planet, Nashid Abdul Khaliq (R.A.), departed this world for the Akhira. My teacher, my mentor, my friend, my big brother… I looked at the man like a father figure and loved him as if he was such. To know Nashid in fact, was to love him. It was impossible not to. He was warm. He was comforting. He was selfless. He was valorous. And he had so much knowledge and love for humanity to impart. There wasn’t a single time in the near-decade I had the pleasure and honor of being in his orbit–yes, orbit, Sidi Nashid was planetary, masha’ALLAH–that I spoke to him and came away without learning something new or seeing our struggle against the Beast in a deeper, more strategic way.

A son of Grenada and bred in New York City, Nashid was kicked out of his house at a young age and spent some time homeless on the streets of Brooklyn’s Bedstuy at a point when the borough was a war zone. He survived the slums by the grace of ALLAH (SWT) and found his way to the light of the Deen through the Nation of Islam (NOI), putting himself through a profound metamorphosis from knucklehead–his word–to family man, businessman and revolution-man. He ultimately wound up at MIT where he graduated with honors in Physics and then became a professor. A father, a husband and the patron saint of intellectual Mouqawamah globally, Nashid essentially laid out the blueprint for making it out of the muck in defiance of every oppressor and building a life that is worthy of the Holy Prophet Muhammad’s (S.A.W.W.) Sunnah.

There are countless… LITERALLY… countless lives from one end of the Earth to another that are changed for the better because of Nashid’s magnanimity. Palestine. Lebanon. Kashmir. Yemen. Iraq. Syria. Myanmar. Haiti. Black and Brown communities throughout America. The NOI. Sidi Nashid gave whatever he could, whenever he could and regardless of any hardships he was dealing with in his own life, it never prevented him from being fixated on the liberation of Palestine from Zionist occupation and the freedom of humanity from the Rothschild Octopus. He founded www.AscertainTheTruth.com to counteract the Zionist media’s lies against Islam and over the years, it has become an archive of Anti-Parasitism that has, yet again, helped bring COUNTLESS souls out of mental slavery. Truth and justice were like air to Nashid; they are what meant the most to him and what he strove to implement every single day of his monumental life. He was a prolific writer and researcher whose pieces set a standard on how to pick apart the lies of the enemy. Alongside Christopher Bollyn and the late, great Michael Collins Piper (rip), Nashid was one of a mere handful of individuals who had the insight to say from day one of the September 11th attacks that it was not “Al-Qaeda” or the accursed Saudi regime which were responsible but the usurping ‘Israeli’ entity. He also holds the distinction of having been the ***LONE*** American writer at the time to expose the failed Mossad operation on the Mexican Congress building of Mexico City one month after the 9/11 catastrophe. Like Malcolm X, Nashid was a visionary of unparalleled depth.

It is a shining and undeniable testament to how much ALLAH (SWT) loved Nashid that He (SWT) sent Malak al-Mawt (A.S.) for him at dawn just as he was finishing up woudou for Fajr. Even now, almost 5 months after the fact, my heart is heavy like the full weight of Cheekha Dar was pressed down upon it just thinking about the fact I now live in a world that doesn’t have his physical presence. We had spoken just the day before. He congratulated me on completing “Iraqi Ghirasi (The Wrong Goy)”, told me he’d call me later on so we could talk more about it and said he’d continue praying that the Jewish Power Configuration’s case against me died so I could get back to writing again as well as share the new record with the world. He also told me he wasn’t feeling well but insha’ALLAH everything was going to be okay. Of course… as it turns out… it wasn’t. I was going to ask him to be part of “Ghirasi”, to speak on a track that moved him like he did for “Eternally Husseini” with my favorite track off that album, “Who Do You Fear? (Shirk Nation)”. But of course… I never got the chance. I wish so much I could’ve chopped it up with him once more… Told him how much that he meant to me… But I have no doubt that… In his heart of hearts, he knew. Both being street kids from Brooklyn and having very similar, very difficult upbringings but still finding our way to what ALLAH (SWT) intended for us, we were connected on a metaphysical brotherly level, subhan’ALLAH. So… I know that he knew.

From the moment hell fell on my head at the hands of B’nai B’rith last summer, Nashid was there on all fronts. I lost track of how many times he told me it hurt him that he couldn’t do more to help me through it and that he wished he could snap his fingers and watch the Monsters vanish. And beyond that, with all of the painful experiences in my life over the last decade especially, I don’t believe I could’ve gotten through any of it without his brotherhood and friendship. The man was a giant of giants; a spirit as big as the sky with a splash of the sun mixed in. And his goodness was so towering that you couldn’t help but feel lifted up just by virtue of having him in your corner. When I got the word from my lawyer that I had been cleared, I instinctively found myself rushing to my phone to send him a message only for it to hit me an instant later that I couldn’t. Before that nagging pain of loss kicked in though, I swear in that moment that I could feel him smiling his ever-radiant smile because we had finally achieved victory.

Nashid is survived by his equally brilliant and beautiful wife Akanke, who he loved and cherished the way Muhammad (S.A.W.W.) loved and cherished Khadija (A.S.), as well as a daughter and five sons, including my dear brother Tariq Abdul Khaliq, who he adored in the manner Muhammad (S.A.W.W.) adored Lady Fatima al-Zahra (A.S.), Imam Hassan (A.S.) and Imam Hussein (A.S.) He lives on through them. And every time that we share his writings, his podcasts, stories of his altruism and his triumph over poverty, and send those who are sleepwalking to his site to ASCERTAIN THE TRUTH, he lives on through us. As we defend Islam, do all that is necessary to preserve Sunni-Shi’a unity, fight to disseminate 9/11 truth and struggle for the Palestinian cause, he is with us. ALLAH yerhamak ya habib albi Nashid. Pearl of pearls. Gift of gifts. Blessing of blessings. Luminary of luminaries. Hammer of hammers upon the heads of the Jahcubites. Bullet of bullets right between the “all-seeing” eye of the JNWO. And star of stars, lighting the way for all who were privileged enough to cross paths with you. I love you. I’ll miss you. And I promise I’ll keep a seat open for you at the celebration in Al-Quds after we vanquish the Serpent. Rest in serenity my beloved brother.