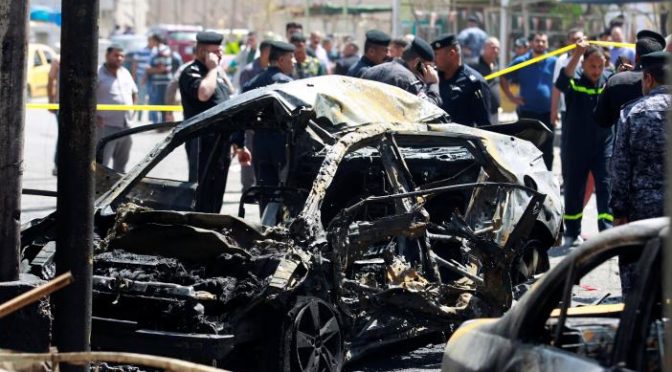 And the agony, hellishness and bloodshed continues in the Cradle of Civilization. Right after ISIS detonated a car bomb near Al-Faqma Ice Cream Shop last night in the Karrada district of Baghdad, another car bomb was unleashed by the Takfiri scourge on the Karkh district early this morning. At least 10 martyred and over 44 others wounded in the blast. Some of the injuries are severely gruesome and the casualty count is expected to rise. The target was a government office and there are Shi’a, Sunnis and Christians among those murdered and hurt. Again, all of Iraq bleeds, all of Iraq suffers, all of Iraq burns and all of Iraq wails for this horror to stop. The American ZOG and ‘Israel’ have ordered these attacks because they know that the threat of Daeshi terrorism is near its end on Iraqi soil. With the advancement of the Iraqi Resistance on the Iraqi side of the Syrian-Iraqi border and the forward progress of the Syrian Arab Army from their side, as well as the almost-finished liberation of Mosul despite Amreeki attempts to hinder our victory, the Empire is dramatically reluctant to let Iraq return to a life of normality. Thus, the carnage.

We can talk day and night about ISIS, its toxic Wahhabi-Takfiri ideology, its savage recruitment of children as soldiers, its Khaleeji-financed call to arms for their their bogus Zionist “Jihad” as Sheikh Imran Hosein beautifully calls it, and more, but when it’s all said and done, the party responsible for Iraq’s ruin is the Great Satan. There will continue to be terrorism, economic degradation, political corruption, other after-effects of the criminal, genocidal ’03 invasion and the looming threat of balkanization so long as the American regime runs amuck on our soil. Our ancestors did not build this land with their flesh and bone so it would become a slave to the most malevolent regime in the history of the world, nor did our martyrs sacrifice the gifts of their lives to resist this Zio-Imperialist violence just to let it all fall to the wayside. We are Iraqis, yes, but we are also Mesopotamians, Sumerians and Babylonians. We are the living ancients who erected the Cradle of Civilization alongside the jinn and the Angels (A.S.) And this… agony, hellishness and bloodshed… is not who we are. Nor is it who we’re supposed to be. We will rise again and soon thereafter, all of this will be a memory as distant as sands swept away by wintry winds. Insha’ALLAH khair. Until then, we will do what we’ve been doing: Resisting with everything that we have. May ALLAH (SWT) grant Gorgeous Paradise to the Karkh district Shouhada.