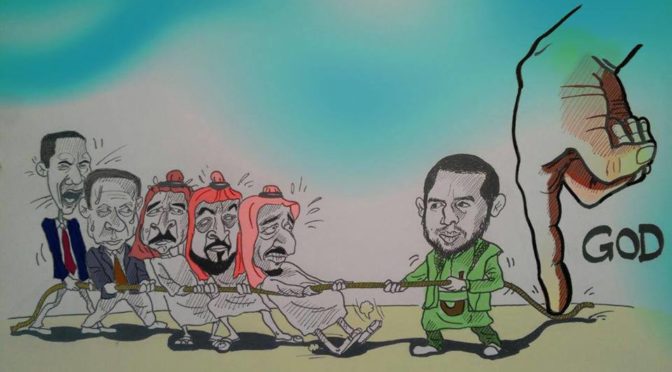 If Yemen’s struggles and triumphs could be summed up in a single piece of art then this is it. On one side of the divide, you have the demonic Dönmeh House of Saud, its GCC marionettes, Jordan, Morocco, Egypt, traitorous Sudan, betrayer Eritrea, Mauritania and Turkey, backed by the American regime, the UK, France, Germany, Canada and of course, ‘Israel’, while on the opposite side you have the Yemeni Islamic Resistance of Ansarullah led by the indefatigable Sayyed Abdul Malik al-Houthi, who are defeating this coalition of ominous oppressors with nothing but their blood and their faith. And of course ALLAH (SWT) is on the side of the Houthis because ALLAH (SWT) is Al-Adl, The Just, and justice is always on the side of the oppressed as Malcolm X (R.A.) used to remind us of constantly.

Like Syria, Yemen is the ultimate litmus test of what one’s geopolitical stances are. As I rhyme on “Lion From The Highlands”, the intro track to my album “Felicity Of The Oppressed”, dedicated to the remarkable heroes of Yemen: “Ain’t no in the middle here ‘cause when you feel them missiles near then the issue’s clear, slammed to bed and to rest/You stand with the tyrants, and their air raids and siege on everything from gas to band-aids and beans or stand with Yemen’s oppressed/And don’t you mounafiqoun dare pray with beads, we know you only make Salat to your Zionist masters…” There are no “both sides” in Yemen, as the House Muslim, House Arab, US State Dept shill and Zionist-normalizer Linda Sarsour would have us believe. There is nothing “halal” about Al-Saud’s genocidal onslaught against the Yemeni people as some sectarian Wahhabi-Takfiris attempt to portray it. And what’s taking place on Yemeni soil absolutely ain’t no damn “civil war”, though the Western-Zionist MSM absolutely loves telling this lie with regularity. What you have in Yemen is an indigenous Resistance vs. an Empire-backed invasion force; counter-hegemony vs. hegemony; it’s like the Afghani people against NATO; it’s like the Iraqi people against the US-UK-Zionist aggression; it’s like the Palestinian people against Zionism everyday.

In simpler terms, what you have is the anti-Zionist, anti-Imperialist, anti-Wahhabi Yemeni Men of God vs. the Saudi-‘Israeli’ beasts of Satan. If you’re actually having a difficult time determining what side you’re on in such a struggle… Well. You seriously need to jump the hell off a cliff with the quickness. Because straight up… You, your “analysis” and your “commentary” are worth even less than the obliterated Saudi invaders smashed underneath the sandals of Ansarullah’s righteous, steadfast, magnificent moujahideen. ‪#‎LongLiveYemen‬ ‪#‎LongLiveTheHouthis‬ ‪#‎DeathToSaud‬ ‪#‎StandWithAnsarullahAllDayEveryday‬

2 thoughts on “Pick A Side: Yemen’s Men of God vs. Satan’s Saudi-‘Israeli’ Beasts”