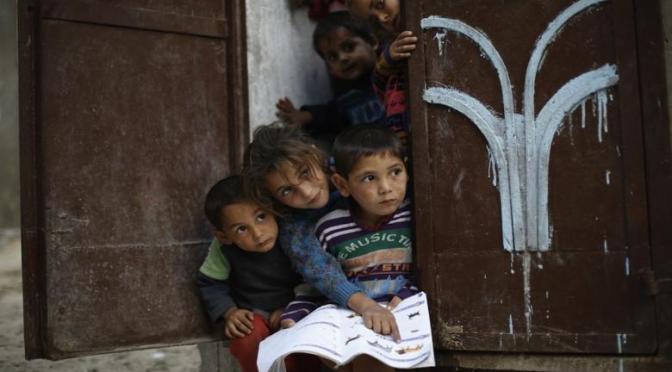 Gaza has become an open-air prison after Israel decided to close two border crossings with Gaza, after a rocket allegedly fired from the Palestinian enclave struck its territory.

The Israeli blockade comes a week after Egypt closed its border with Gaza. With all borders closed, more than one and a half million people in Gaza are now isolated from the outside world. They are prisoners inside the 360 square kilometers that make up the coastal Strip.

“The crossing points for people and goods, Erez and Kerem Shalom, have been closed until further notice except for humanitarian aid,” an army spokeswoman said.

She said that the measure was taken after a rocket fired from Gaza hit Israeli-occupied Palestinian territory on Friday, without causing any casualties or damage.

There was no claim of responsibility from any armed faction in Gaza. A military spokeswoman said forces were still searching for debris.

“The justifications given by the (Israeli) occupation to shut down crossings are unacceptable,” Abu Marzouq said in a statement, adding that Israel’s decision violated international laws and conventions.

Instead of closing the crossings, he said Israel should establish more crossings in order to allow for greater freedom of movement for people and goods in and out of Gaza.

The ceasefire deal stipulated an end to hostilities, and Israel agreed to ease its devastating eight-year blockade on the Strip and expand the fishing zone off Gaza’s coast.

The head of the Gaza fishermen syndicate accused Israel of constantly violating the terms of the agreement.

“Since signing the truce, the Israeli army has violated (the agreement) eight times, arresting fishermen and destroying a giant fishing boat, in addition to firing at fishermen on a daily basis,” he said.

On Wednesday, Israeli forces shot and injured a Palestinian man on the beach in the northern Gaza Strip.

Furthermore, Gaza is also littered with a large number of unexploded Israeli shells, one of which has recently killed 4-year-old Mohammed Sami Abu-Jrad from the northern Gaza city of Beit Hanoun.

Israel also agreed to allow construction material into Gaza. But two months after the war ended, no building material has entered Gaza due to Israel’s ongoing blockade.

A recent crackdown on the tunnels by the Egyptian army, however, has effectively neutralized hundreds of tunnels, severely affecting Gaza’s construction sector.

On Wednesday, Egypt began setting up a buffer zone along its border with the Gaza strip in a move which will see about 800 homes demolished.

It comes in the wake of a suicide car bombing which killed 30 Egyptian soldiers in Sinai last week, the deadliest attack on the military since ousting Egypt’s former president Mohammed Mursi.

Following the bombing, Egypt immediately closed the Rafah crossing into the Gaza Strip, the principal connection between Gaza’s 1.7 million people and the outside world.

In August, Egypt’s authorities have used an attack on the Egyptian military in Sinai as a pretext to start a campaign to destroy Lifelines into Gaza. Over 120 tunnels were blown up or filled in.

More than just being the only way for some products to make it into the over 1.7 million Palestinians living in the strip, the Gaza tunnels have become a major source of income for the transporters of goods. Egypt has closed Gaza’s lifelines.

Since the beginning of 2014 until the end of May, Rafah crossing has been opened only 14 out of 120 days, limiting access to humanitarian cases and for other authorized travelers – including foreign nationals and visa holders.

Abu Marzouq also criticized the Palestinian Authority for what he called a failure to arrange the entry of goods into Gaza.

With all crossings closed, water and food supplies in the besieged Gaza Strip are dangerously low.

On Sunday,the Palestinian embassy in Caracas said in a statement that Venezuela will send 10 tons of humanitarian aid and medical equipment for the war-torn Gaza Strip.

A plane will carry the aid from Caracas to the Amman airport on Sunday, and the same plane will bring 100 Palestinian students who have been granted scholarships to study in Venezuela to the country, the statement said.

Linda Subih, the ambassador of Palestine to Venezuela, said in the statement that she and 31 young Venezuelan men and women would accompany the aid to Amman, after which it would be sent to Gaza.

Meanwhile, companies in Gaza have stopped providing the al-Shifa hospital with food for meals in protest against not being paid for five months, a hospital official said Saturday.

Nasr al-Tatar, the general director of al-Shifa hospital in Gaza City, told Ma’an the move was dangerous as it impacts both patients and medical workers.

Al-Shifa hospital serves about 1,500 meals a day, and this number doubled during the Israeli offensive on Gaza in July and August.