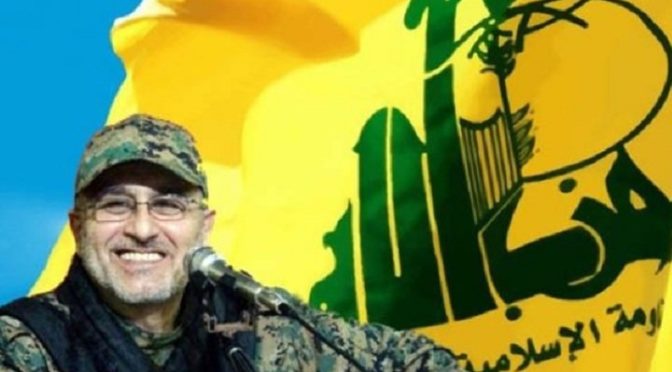 A bolt from the blue. That’s what it was. We all felt it. Piercing our hearts like the knife of a cardiothoracic surgeon. Only in this instance, there was no anesthetic to numb the excruciating pain. It just penetrated our beings, deep and merciless, and filled us with a sadness so sudden and so severe that even attempting to catch our breaths would feel like death. On this day, one year ago, Hajj Moustafa “Sayyed Zulfiqar” Badreddine (R.A.), the Hizbullah Commander who constructed the Lebanese Islamic Resistance’s hybrid warfare doctrine alongside Hajj Imad Mughniyeh (R.A.), was martyred by Zionist-backed Takfiri terrorists in the Syrian capital of Damascus. The legendary moujahid, who had guided the Mouqawamah to every major victory it had ever achieved since its very inception, was a personality of such stature and uniqueness that his likes will never be seen again. Not in this epoch or the next. Not ever. He wasn’t a mere revolutionary but who revolutionaries model themselves on. He wasn’t just a struggler but who struggles are waged for and named after. Sayyed Zulfiqar, an angel who temporarily took human form, inflicted countless defeats on the usurping Zionist entity during his time on Earth and his departure back to his heavenly home has a left a void in our souls. The enemies of Islam hoped that his martyrdom would leave a void on the battlefield too. Unfortunately for these demons however, that just isn’t so.

For since Sayyed Zulfiqar was murdered in the wee hours of the morning on May 13, 2016 by ‘Israeli’ darling Jabhat al-Nusra–which couldn’t even stand face-to-face with the General of Jihad, choosing to launch shells from kilometers away with the Zionist occupation army’s intelligence assistance instead–there has been triumph after triumph across the region. Indeed, in all arenas where Hajj Moustafa was present, the Moustazafeen who bear his signature after being vigorously trained and righteously guided by his seraphic person, have prevailed against their oppressors. In the Damascus countryside, the site where the Hizbullah champion achieved martyrdom, the vast majority of the territory has been freed, including the Damascus Military Airport area in totality. Both sides of the Lebanese-Syrian border (including Tufayl), where Sayyed Zulfiqar spent a great deal of time battling the Takfiriyeen, are now COMPLETELY free, as Sayyed Hassan Nasrallah confirmed just two days ago. Aleppo is now liberated and many of the NDF fighters and Syrian Arab Army units prepped with fresh counter-insurgency techniques who participated were trained by none other than Hajj Moustafa. Fallujah, where Sayyed Zulfiqar traveled to as a means of getting a feel for the grounds just after helping the Iraqi Resistance purge the Baghdad Belt of Daesh, was freed just a month after his death by Men of God that he groomed. Missile launchers engraved with Badreddine’s face remain a fixture in the arsenal of Iraqi moujahideen.

Perhaps in the biggest blow to the Zionist enemy, in the occupied Golan Heights, where Hajj Moustafa Badreddine oversaw the entire Mouqawamah infrastructure being built, Iraqi Islamic Resistance group Harakat Hizbullah al-Nujaba’s Golan Liberation Brigade is now fully operational. And thanks to Sayyed Hassan Nasrallah’s aforementioned speech, we also now know that it was Sayyed Zulfiqar who led what may be Hizbullah’s greatest, most famous and most celebrated individual battlefield victory: the legendary Ambush of Ansariyeh. The martyred Hizbullah warrior-saint also led the Mouqawamah to a game-changing win in the ’96 war with the ‘Israeli’ enemy. And most wonderfully, Nasrallah also revealed that Sayyed Zulfiqar had been active in Iran–presumably on the border with Iraq where there is much Mossad subversion as well as Takfiri terrorist activity, along with Balochistan where Zio-Imperialist intelligence agencies and their proxy gangs are deep–and Palestine itself–presumably in weapons smuggling operations during the Second Intifada alongside rugged Hizbullah Martyr-Commander Fawzi Ayyoub (R.A.) Today, the IRGC utilizes all it learned from Sayyed Zulfiqar by continuing to keep its borders safe and the Palestinian Resistance uses weapons delivered by the Martyr-Prince in all its defensive operations against ‘Israel’.

Do you know how sun-like stars “die”? After their core runs out of hydrogen fuel, hydrogen fusion subsequently occurs in the upper layers. The stars heat up and then expand, transforming into red giants. They continuing heating up until helium fuses into carbon. The core only cools (but continues to expand) when the helium fuel completely runs out. When this process is finished, stardust shoots out from these expanding upper layers to form a planetary nebula. This is the perfect parable for Hizbullah’s martyrs, Sayyed Zulfiqar most especially. Shoot them, bomb them, shell them, but the only thing that happens is their essence… THEIR STARDUST… will continue to expand, birthing more and more moujahideen with more and more determination, all of whom are committed, with their blood and their faith, to the liquidation of the Zionist project. And even when the battles are over, after Takfirism is totally stomped out, the Hijaz is freed from Al-Saud and Palestine is no longer putrefied by the cancerous presence of the colonizing Zionist Jews, Hajj Moustafa “Sayyed Zulfiqar” Badreddine will still be there in the highest echelons of the sky, remarkably shining down upon those who carried his blessed mantle into history’s halls of valor. Like a Yellow-and-Green Giant. Like a Mouqawamist Nebula. Like an Ornament Adorning Us.

One year on since Sayyed Zulfiqar’s martyrdom, we still mourn for him. Shed tears for him. Miss him. But at the exact same time, we defiantly celebrate his every achievement. And masha’ALLAH, there are so many to marvel over. But more importantly than that… There are even more that still must be registered. In his name. With his training. With his guidance. His light worn on our sleeves and our faces. In a liberated Al-Quds–that which you desired most–next year, o’ lionheart! Rest in eternal peace and infinite power, o’ hero!