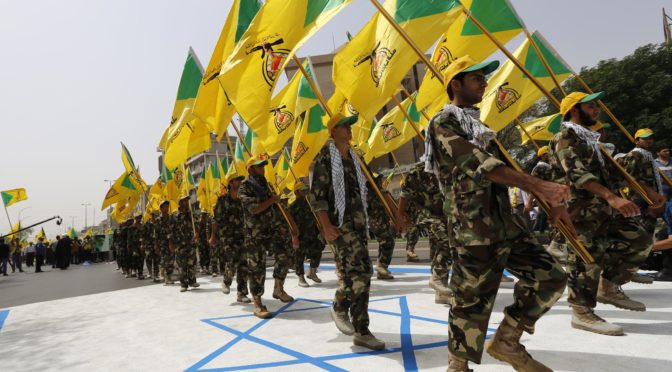 Love my people: Fighters of Iraqi Resistance organization Kata’ib Hizbullah march upon the accursed flag of the usurping ‘Israeli’ entity for Al-Quds Day, July 25th, 2014. Because of the scourge known as Daesh that has plagued our nation for the last two years, it is too-often forgotten just how integral that true Anti-Zionism–i.e. rejection of the criminal, artificial, putrefying Jewish supremacist cancer’s existence and total opposition to global Zionist power–really is to the very identity of Mouqawamist groups in Iraq, Kata’ib Hizbullah especially. It is indeed the bedrock! And with this mindset, these Mighty Moujahideen walk the same path as Lebanon’s Hizbullah and Iran’s Islamic Revolutionary Guard Corps; they are the sons of the exalted Shahid Ayatollah Sayyed Muhammad Baqir al-Sadr (R.A.), who called ‘Israel’ the “Khaybar of our time” and the “tumor at the base of the Ummah’s spine”. They view all regional events through this lens, including the battle with the Takfiris who are seen–rightfully—as nothing but mere tools of World Arrogance. Iraqis, and, again, chief among them Kata’ib Hizbullah, cannot WAIT to partake in the inevitable battle to liberate Al-Quds and dispatch ‘Israel’ to the great nothingness!

For now though, as we move towards ending ISIS’s hold on Mosul in spite of American-‘Israeli’-Saudi schemes, Kata’ib Hizbullah can be seen in the center of this struggle, directing the victories in many of the freed Assyrian-Christian villages on Mosul’s outskirts and now leading the way to liberate the strategic Turkmen town of Tal Afar. Its fighters have already secured a massive strategic victory in this regard, retaking the Mosul-Aleppo (Ninewa-Raqqa International) Highway, the only direct escape route Daesh had to bounce out of Iraq into Syria. Yesterday, Kata’ib Hizbullah battered the American and British invaders. Today, Kata’ib Hizbullah is one of the heaviest hands of the Iraqi Popular Mobilization Units in striking blows upon the Zio-Wahhabi heads of MossadDaesh. And tomorrow, Kata’ib Hizbullah will be at the forefront to make Palestine whole again. I am as certain of it as Imam Hussein (A.S.) was when he embraced martyrdom and delivered Islam from Yazid (L.A.) on the sacred sands of Karbala. Triumph to Iraq! Triumph to Kata’ib Hizbullah! #LongLiveIraq #LongLiveKataibHizbullah