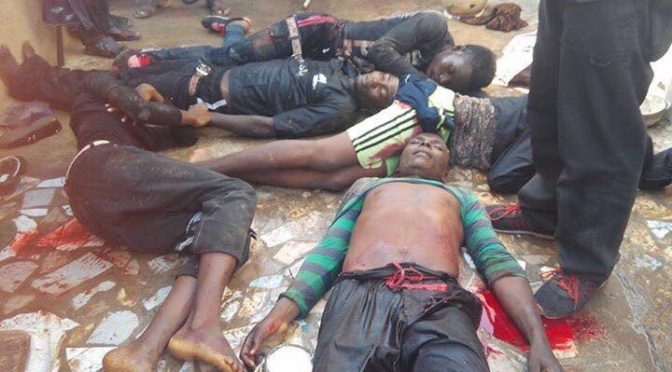 Between December 12th and December 14th of 2015, the Nigerian army carried out one of the most barbaric atrocities in recent memory as it shot, bulldozed, beat and maimed hundreds (and possibly thousands) of Nigerian Shi’a to death at the Husseiniyah Baqiyatullah in Zaria. Thousands of others were wounded and at least 705 innocents on top of that have been disappeared. The slaughter concluded with Sheikh Ibrahim Yaqoub al-Zakzaky, Africa’s most important revolutionary, being unjustly imprisoned alongside his wife and several of his companions. Fast forward 10 months later, and not only are the Sheikh and his dearest ones still imprisoned, still tortured and still in terrible health as a result of these aggressions, but the Nigerian army– an institution of oppression backed, armed, trained and financed by the American regime, the usurping Zionist entity and the Saudi Kingdom of Darkness–is at it again, carrying out yet another massacre of Nigerian Shi’a as they were mourning for Imam Hussein (A.S.) At least 14 unarmed demonstrators, including several women, were shot dead at Ashoura processions in Funtua and Kaduna on Youm al-Ashoura.

Like Saddam Hussein, Al-Khalifa and the tyrannical Shah of Iran before HIM, Buhari had barred all commemorations of Imam Hussein’s (A.S.) martyrdom before this latest atrocity. but standing up as Iraqis, Bahrainis and Iranians did before THEM, the Nigerian Shi’a defied this ban because they refused to be kept from honoring the Savior of Islam (A.S.) and his partisans. They paid for their righteous defiance with their blood, just like the Karbala 72. This hatred for those who love Imam Hussein (A.S.) which is being exhibited by Abuja in such a blatantly obvious manner, really does make you think that the despot Buhari and his generals are actually TRYING to emulate Yazid’s (L.A.) crimes on Ashoura. And this is precisely why, if you identify as Husseini Muslim, Anti-Imperialist and Anti-Zionist, you must make it a PRIORITY to speak about the plight of the Islamic Movement of Nigeria (IMN), its martyrs, its leader Sheikh Zakzaky, its missing persons, 50 of its young women who were kidnapped by the Buhari regime and its political prisoners. The followers of Zakzaky and the Sheikh himself are truly Imam Hussein’s (A.S.) upholders and the Zaria Massacre is referred to by the IMN as the “Nigerian Karbala”. They are as Husseini as Husseini can get; as Husseini in fact as Hizbullah, Ansarullah, the Iraqi Resistance and our Magnetic North, the Islamic Republic of Iran, and thus deserve all of our support.

The US-‘Israeli’ Empire and Dönmeh Al-Saud, who are waging war against Islam throughout the world with their Takfiri project, would like nothing more than the counter-hegemony represented in the person of Sheikh Zakzaky to be wiped out. At the disposal of Earth’s Most Evil are their mainstream media, their international bodies like the UN as well as the OIC and their NGO-Human-Rights-Industrial Complex, to name only a few of the cogs in their machine. These entities will not deliver freedom, justice and peace to the IMN, nor will they secure the release of Zakzaky. So we mustn’t demand anything from these entities, other than their collapse, for they aren’t “silent” but actively part and parcel of the scheme against our peoples, our region and our Ummah. To raise awareness on the horrors suffered by the Nigerian Shi’a and to achieve liberation from Zio-Imperialism at large, we must be like Abou Fadhl al-Abbas (A.S.) and run towards the fight against oppression, not tiptoe around it and seek approval from the tentacles of the system doing the oppressing in the first place. We need to scream for them as we do for Syria, Yemen, Iraq, Bahrain and Palestine–all of which mind you have been eloquently and vociferously defended by Zakzaky, the primary reason he, his family and movement were and continue to be targeted. Anything less than such a commitment is an insult to the Sheikh, the Moustazafeen of the IMN and Imam Hussein (A.S.) himself. May the blessed Kaduna and Funtua martyrs rest in eternal bliss alongside their fallen Zaria brothers and sisters. #FreeZakzaky #BringBackOurZariaGirls #LongLiveZakzaky #DeathToTheBuhariRegime #ImamHusseinWouldFightForZakzaky