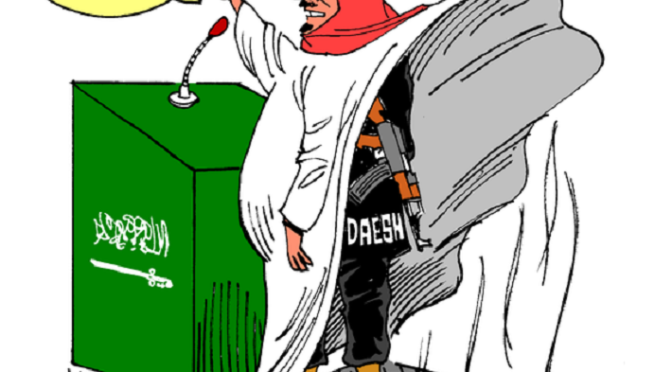 Unbelievable! Not even 48 hours after the putridly deceptive Saudi regime claimed to have routed Al-Qaeda in the Hadramawt capital of Mukalla and killed 800 some odd fighters, the Houthis’ intelligence unit discovered officials from Riyadh meeting who else but Al-Qaeda and where else but Hadramawt in secret talks focused on further military cooperation between the two Takfiri “brothers”. Ansarullah official Abou Jihad al-Zaydi revealed that Al-Saud asked Al-Qaeda to become the GCC coalition’s central strike force and take over operations in Ma’rib and Ta’iz. Al-Saud offered modern weaponry to the Takfiri gang for this task and Al-Qaeda asked their patron for additional financing as well as logistics.

This damning revelation doesn’t just confirm that Al-Saud’s story of “liberating” Mukalla is indeed a steaming pot of horrendous hasbara. It’s undoubtedly far beyond that. It also displays, amply, that as desperate as the Wahhabi tyrants were to get a propagandistic “win” which could disassociate them from their increasingly widespread reputation of being known as terrorism financiers, they are simply incapable of stepping away from their ideological children. They’re so intimately and abyssally intertwined that one doesn’t know where Al-Qaeda ends and the Takfiri Kingdom of Darkness begins. From the earliest days of the British-facilitated Saud-Wahhab alliance, the only “accomplishments” these monstrous, backwards tyrants have registered is slaughter, destruction, plunder and the wreaking of havoc on anyone refusing to submit to their despotic, un-Islamic rule. Shedding blood is all they know.

Whether they’re engaging in the systematic evisceration of Yemen, plotting against Hizbullah, backing terrorist groups that shell Syrian children to death in Aleppo, crushing the unarmed and the peaceful in Bahrain, oppressing Sheikh Ibrahim Yaqoub al-Zakzaky and his movement in Nigeria through their petrodollar-bought proxies, having ISIS detonate car bombs at soccer games, markets and mosques in Iraq, funding Takfiri maniacs that slaughter Shi’a and Ahmadis in Pakistan, or cheering on its ride-or-die homie ‘Israel’ as it maximizes murder in besieged Gaza and Lebanon, the Dönmeh Saudi regime can’t make a move, breathe, live or even exist without terrorism.

It is for this reason that the near-total global silence and deafening quiet from the “activist” side of things on Yemen is so utterly maddening. The struggle of the Yemeni people and their Resistance isn’t just for the soul and future of their nation; it’s a fight they’re waging on behalf of the whole planet. Because a triumph over demonic Al-Saud is a triumph for anything that is good, wholesome, decent, justice-filled, pure, innocent and righteous in this world. Western “solidarity” peddlers, most Arabs and most Muslims all may be turning a blind eye to Zionist Saudi Arabia’s crimes and terrorism, some may even be aiding and abetting this genocidal onslaught against Yemen, but Ansarullah’s lions ain’t going anywhere. They’ve prevailed thus far and will only continue to prevail, in complete and utter disregard for whatever plots the Wahhabi monarchy and its Al-Qaeda vassals happen to concoct next. ALLAH (SWT) did indeed promise that His Party and His Partisans would always be victorious. ‪#‎LongLiveYemen‬ ‪#‎LongLiveAnsarullah‬ ‪#‎DeathToSaud‬ ‪#‎DeathToAlQaeda‬