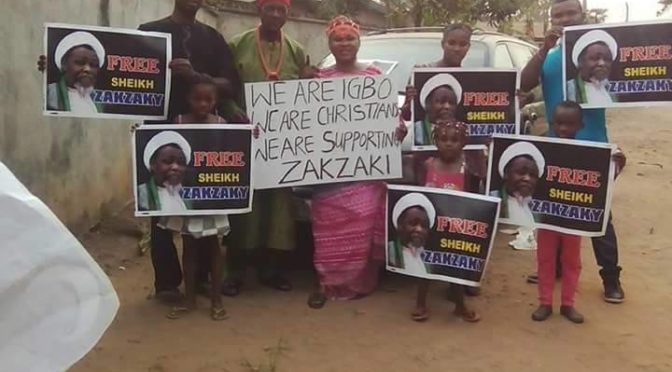 Eight months. Eight long, grueling, harsh, despicable, PROFOUNDLY unjust months have passed since Sheikh Ibrahim Yaqoub al-Zakzaky was locked up on false charges and his partisans were massacred in Zaria by the increasingly disgusting, tyrannical and collaborationist regime of US-‘Israeli’-Saudi servant Muhammadu Buhari. This murderous despot, who claims to be a representative of African “democracy”, has tried his best to paint the Sheikh as a “Shi’a terrorist” who threatens “state security” in an attempt to brainwash the Nigerian everyman into thinking that there isn’t a criminal Zionist-Imperialist scheme at play here. Buhari’s ploys, cooked up in Riyadh, Herzliya and Langley, may have worked on large chunks of Nigerian “Muslim” society–i.e. that “Islamic” sector bought and paid for by Saudi petrodollars–as well as “The Ummah” at large which remains disturbingly and horrifically indifferent to the plight of Zakzaky–also due to Al-Saud’s filthy money–but it has not had any affect on Nigeria’s Igbo Christians, who stand with the Sheikh in full, beautiful, inspiring, cross-communal solidarity.

Sheikh Ibrahim Yaqoub al-Zakzaky has spent his life striving tirelessly to bridge ethnic, religious and sectarian gaps in Nigerian society opened up by the Rothschild-financed British colonialists and he prides himself on having many close Christian comrades. Clearly, those efforts have paid dividends as Christians are now coming to his defense in defiant droves and have in fact been calling for justice on behalf of the Zaria Martyrs since the unspeakable crime was committed by Buhari’s Zionist-backed army last December. These gorgeous, resistant followers of ‘Isa al-Masih (A.S.) are sending a strong message to the Buhari regime and its backers: We shan’t be fooled by hasbara! We shan’t be tricked by the lies of a Zio-Empire-owned dictator! And we shan’t be divided!

As World Zionism works day and night with its “clash of civilizations”, its war on Jesus Christ (A.S.) via Hollywood and its simultaneous dissemination of Islamophobia and Wahhabi-Takfirism to sow discord between Muslims and Christians, one can’t help but cheer and smile incandescently upon seeing Nigerian Christians stand up for the Sheikh and the oppressed Islamic Movement of Nigeria. May their efforts not only reverberate throughout the Nigerian state but the entire globe, so all free people and all Moustazafeen, Muslim and Christian alike, stand up as one and demand the immediate release of the saintly, revolutionary Ibrahim Yaqoub al-Zakzaky and retribution for the innocent lives taken at Zaria’s Huseiniyyah Baqiyatullah. Looks like one more struggle can now be added to the growing “We Are One Hand” list! #FreeZakzaky #LongLiveZakzaky #MuslimChristianUnity #DeathToTheBuhariRegime #WeAreOneHand