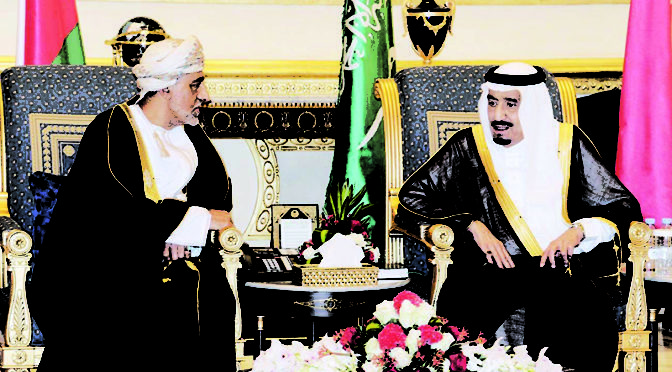 Time to put the Omani regime on the “DEATH TO…” list as well. Very quietly and very sneakily, right at the end of 2016, the corrupt tyrant in Muscat joined the Saudi regime’s genocidal war on the Yemeni people. Those that praised “Sultan” Qaboos for his “neutrality” on Yemen were either engaging in naïveté or sheer ignorance of history. Qaboos, a despicable Anglophile, an agent of corruption and according to more than one source, a decadent, degenerate homosexual, has always been an enemy of the Moustazafeen. It was Qaboos who worked with MI6 to overthrow his father Said Bin Taimur in 1970 in the midst of a righteous rebellion led by PFLOAG, the Popular Front For The Liberation Of The Arabian Gulf. He subsequently handed over the reins of Omani foreign policy to his masters in the British colonialist regime. London, fully in control of Muscat, sent in thousands of forces, and its new puppet Qaboos, called in military support from his friend Muhammad Reza Pahlavi, the despot who ruled over Tehran for nearly three decades with an iron fist and full Western-‘Israeli’ support. With the assistance from Union Jack and then-collaborationist Tehran, Qaboos crushed the revolutionary insurgency in 1976 and upheld his illegitimate rule.

Additionally, Oman disgustingly houses a vast American military presence at the RAFO Thumrait Air Base in none other than Dhofar, where PFLOAG’s uprising began under the “Dhofar Liberation Front” banner in 1962. Imagine, a tyrant with a cruel and vindictive sense of irony. Qaboos maintains diplomatic and economic ties with the usurping Zionist entity too. For the record, “neutral” parties don’t collaborate with the Great Satan and the Little Satan. And since Qaboos was fully capable of perpetrating such brutality against his own people in service of Rothschild-financed British Imperialism, it should come as no surprise that he’s now part of the barbarity Al-Saud is imposing on Yemen in service of Zio-Imperialism. After all, Ansarullah can (and should) be considered the Shi’a Islamic Liberationist successor to PFLOAG and a much more successful one at that. While PFLOAG unfortunately failed to topple the tyrant that repressed the Omani people, the Yemeni Mouqawamah deposed Hadi and the entire US-‘Israeli’-Saudi-backed system with him, inaugurating a new era of freedom and dignity for Arabs, Muslims and all oppressed people.

This modified model of resistance and liberation shakes the thrones of every tyranny in our region, whether active and aggressive dictatorships like Qatar and Al-Saud or “benign” and low-key dictatorships like Oman and Morocco (which monstrously cracks down on the Sahrawi people of the Western Sahara but mutes just about all coverage on it). It comes as no coincidence that Oman decided to join the Saudi-led “Operation Decisive Storm” coalition right at a time when Riyadh is truly at the end of its ropes and Ansarullah is advancing deeper and deeper into the Saudi-occupied, historically-Yemeni lands of Najran, Jizan and Asir. Qaboos, the insecure and putrid twerp that he is, felt threatened by the Houthis’ progress… Even despite the fact that he’s been able to pacify the Omani people with Westoxification and faux-socialist bribery over a period of several decades. Muscat’s decision should, once and for all, put to bed the “Switzerland of the Gulf” image that Qaboos has tried to keep at the forefront since he put down the Dhofar Revolt in ’76.

By joining Al-Saud’s campaign of terrorism in Yemen, Oman has put itself on the fast track to the hellfire alongside Qatar, Kuwait, the UAE, Bahrain, Turkey, Egypt, Senegal, Sudan, Eritrea, Somalia, Morocco, Jordan, Djibouti and Malaysia. All of these nations, allies of Western colonialist states, wealthy in one form or another and ostensibly “Muslim”, have had the “courage” to wage war on the oppressed and poverty-stricken Yemeni people but could not muster up the same “courage” to fire even a single bullet at the ‘Israeli’ entity. Indeed, the vast majority of the states in the “Muslim” world are part of the aggression against Yemen and thus, have chosen Zionism over their own religion. Just like Syria, the Yemeni nation has exposed the duplicity and complicity of these snake-tongued hypocrites. And Oman now has a seat at the table of these very rats. So… Death to the regime of “Sultan” Qaboos. Death, death and more death for its treachery and betrayal of Yemen.