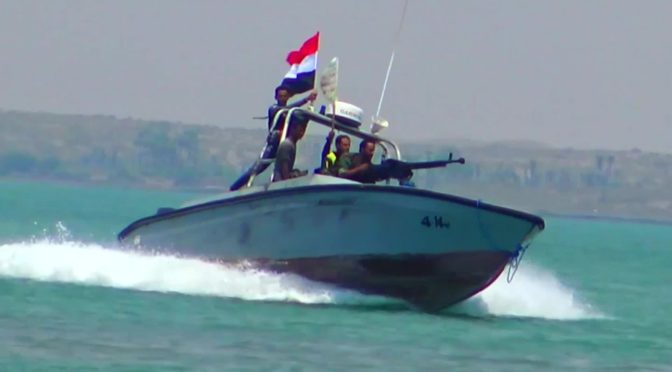 On July 20th, the Houthiyeen and their allies in the Yemeni Armed Forces unveiled the Sammad-2, a long-range attack drone named after martyred Yemeni Supreme Political Council President Saleh al-Sammad (R.A.), and utilized the Mouqawamist UAV to bomb the devilish Saudi oil company Aramco. In and of itself, this is a spectacular military achievement. But the added context makes it even more astonishing. Ansarullah’s maneuver against Al-Saud’s black-gold flagship came as Aramco is nearing the announcement of a multi-trillion-dollar IPO which will go down as the biggest in history. In other words, the Mouqawamah operation is going to have a lasting — God willing, even castrating — effect on the Wahhabi tyrants’ pockets. How can the public trust a company that is constantly being hit by grassroots guerrilla forces’ missiles and drones?

On July 23rd, another milestone. Ansarullah’s naval units launched their very first seaborne operation against Saudi-Emirati occupation forces in Ta’iz’s Al-Moukha, one of the most strategic regions in all of Yemen as it overlooks Bab al-Mandeb. The Yemeni Islamic Resistance liberated this area on March 25th, 2015–just 24 hours before the war began–and the masterful achievement sent World Zionism into a frenzy. The invaders have been trying to retake it ever since. Monday’s operation saw the Houthiyeen striking weapons facilities as well as command-and-control centers of the aggression and sending dozens upon dozens of GCC usurpers straight to Al-Naar. Riyadh and Abu Dhabi never even saw it coming.

On July 25th, the Yemeni Islamic Resistance sunk the Saudi warship Al-Dammam with a homemade surface-to-sea missile, eviscerating the advanced vessel and wiping out the criminal crew. That’s the 14th or 15th Saudi ship that Ansarullah and company have turned into fish food going back to the very start of the US-UK-‘Israeli’-backed aggression. The Houthiyeen hit so many that it’s hard to keep track! This triumph, coupled with the naval assault from the 23rd, forced Saudi Arabia to stop sending oil through Bab al-Mandeb. The Takfiri Najdis are losing hundreds of millions as we speak and it will soon turn into billions.

Yesterday, July 26th, is the “ALLAHU AKBAR!” moment though. Yemen’s heroes debuted yet another drone, this time the Sammad-3, which has a range that stretches out more than twice that of its predecessor, and sent it into Emirati airspace undetected. As if it was powered by the spirit of Saleh al-Sammad (R.A.) himself, the Zaydi UAV struck Abu Dhabi International Airport three times, disrupting numerous flights and causing millions of dollars in damage. The psychological effect may be the most devastating at all as Abu Dhabi isn’t safe anymore. The UAE despots for their part actually had the gall to deny such an attack even happened. Taking a page right out of the playbook of Hizbullah’s Al-Manar however, Ansarullah’s Al-Masirah publicized footage from the drone which not only showed its stealthy entrance into Emirati skies but also the point of impact as Yemeni Islamic Resistance missiles slammed into their target. Sayyed Abdul Malik al-Houthi told Nahyan and Maktoum that their cities wouldn’t be safe if they continued participating in Al-Saud’s genocide. They didn’t listen and Yemen’s Wa3d al-Sadeq [Truthful Promise; Lebanon’s Sayyed Hassan Nasrallah is the first to hold the title] made them pay. Say it with me in celebration: ALLAHU AKBAR!

Keep in mind that these are just ultra-ethereal moments. On the ground, Yemen’s guardians put in the work they usually do, sending hundreds of Empire-backed goons to their graves from historically Yemeni Najran all the way down to Ma’rib and Hudaydah.

Due to the Zionist-Orientalist nature of nearly all discourses on the Arab world and the Islamicate, we always hear of American, European and ‘Israeli’ ingenuity like it was a fact written in stone by the ancestors when it is in reality nothing but an amalgamation of neo-colonialist theft of our ideas and plunder of our resources. True ingenuity… Is that which comes under fire. In the trenches. Under siege. Ducking bombs. Enduring terrorism. Coping with the losses of loved ones and land. True ingenuity… Is that which comes from Yemen.

Blockaded on every side by Saudi Arabia and the UAE with US-‘Israeli’-UK-French-Canadian-Australian assistance. Bombed in every province of the country by the same coalition of cowards. And yet by the grace of ALLAH (SWT), Ansarullah and its allies have managed to invent and manufacture military hardware that has changed the battlefield equation entirely. The war is not just being fought inside Yemen any longer. Saudi Arabia now feels the Yemeni conflagration. The UAE is choking on the smoke of the burning scheme too. May the moujahideen of the Yemeni Islamic Resistance keep on taking their Mouqawamah to even greater heights and even more abyssal depths. They have successfully replicated the Hizbullah Experience (read: Divine Victory over ‘Israel’ in ’06) and built on it even further to the point of folklore. Verily, over 100 years from now, we won’t be talking about Jewish-created superheros like Batman, Superman, Spider-Man and the X-Men. Instead we’ll be in awe, going on and on about the Houthiyeen. Only the legend of these Saba Warriors… Will be real.