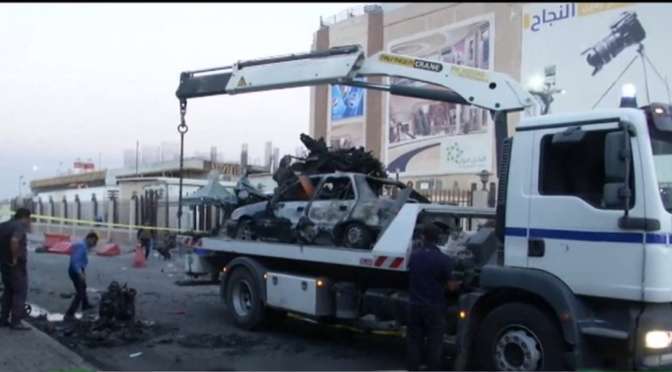 Iraq… O’ beautiful, broken Iraq… You never fail to make my tear ducts run marathons and split my eyes like overripe pomegranates from Diyala. At least 40 Iraqi civilians were martyred and more than 60 others were severely wounded when MossadDaesh planted a bomb at the front entrance and sent a suicide bomber into the parking lot of Baghdad’s Nakheel Mall yesterday evening. Whole families, men, women and children, Shi’a, Sunnis and even Christians looking to buy gifts for their Muslim neighbors, were all shopping for Eid al-Adha when the explosions went off. Shame on the alternative media for promoting the ISIS (read: Zionist hellspawn Rita Katz of SITE and Ben Venzke of Intel Center) claim that “a gathering of Shi’a” was the target, echoing attempts by the Zionist media to spread sectarian discord, despite the fact that this was an assault on the very multi-confessional fabric holding Iraq together. Shame on “The Ummah” for continuing to look the other way whilst their Iraqi brethren bleed in a blackout. Shame on the Iraqi government for remaining the ever-incompetent gang of corrupt hacks that it is and failing to protect the Iraqi citizenry once more. And shame on every “geopolitical commentator” who will bang on endlessly about the threat posed by the Takfiri terrorist scourge, how barbaric it is and how it needs to be stopped for the love of God and the sake of humanity–all of which is true–but have incredible difficulty mentioning who developed and disseminated this virus throughout Iraq to begin with: ‘Israel’ (through its Mossad), the American ZOG (through P2OG) and Al-Saud (through “Prince” Bandar’s suicide bomber network).

Terrorism cannot be exposed and defeated unless it’s core is ripped out… And the core cannot be ripped out unless we speak honestly about what comprises it, i.e. Zio-Imperialism and its Saudi bastard child. So pundits, do call things as they are, or find an ‘Israeli’ flag to stuff in your mouth and keep quiet. Iraqis, and all peoples of our region really, don’t need your “insights” anymore than we need additional Takfiri terrorist blasts. I thought the homeland would possibly get some salaam this Eid… How foolish of me to think such a romantic, optimistic thing. How horrifyingly, mercilessly, heartbreakingly foolish. Rest in power to all our martyrs; may they be granted ALLAH’s (SWT) sweetest serenity in Jannah al-Firdaus.