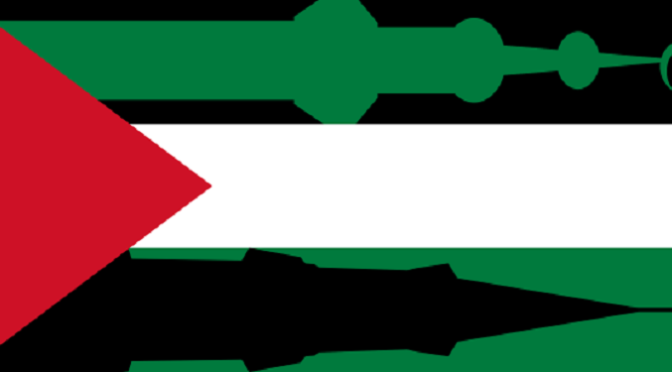 Some may object to us displaying a Christian figure, even one as revolutionary as the Archbishop, with the Zulfiqar Mic-Sword but we wholeheartedly reject such objections and criticisms. The Zulfiqar Mic-Sword represents a person who speaks the truth no matter what–just like Imam Hussein (A.S.)–and who fights for truth no matter what–just like Imam Hussein (A.S.) And there are very few in the Arab-Islamic world who do either of those things quite like Atallah Hanna. This is a man who has spoken up in defense of Islam while many of his fellow clergymen cowered; who has exposed the Zionist plot to foment Muslim-Christian division when many other “Arabs” and “Muslims” and “Christians” signed on to the scheme; who has stood upright for the Syrian Arab Republic when too many “Palestinians” and other “Arabs” betrayed their brothers and aided the destabilization plot; and who has not stopped fighting for the Palestinian Right of Return when large chunks of the “Palestinian leadership” have sold out to the Zionist occupation. Lest we forget that it was a Lebanese Christian, George Jordac, who wrote the best biography on Imam Ali (A.S.), “The Voice of Human Justice”. And lest we also forget that Christians flock to Karbala every year for Arba’een. Indeed, Imam Hussein (A.S.) and Ahlul Bayt (A.S.) are not merely personalities to be venerated solely by Shi’a nor just by Muslims but all of humanity. While I do not mention Archbishop Atallah Hanna by name on “Eternally Husseini”–he’s featured on another album of mine, “Enemy of the Entity”, in the closing track “Beautiful Corpse”–everything that he stands for is everything that the record embodies.

As for Fathi Shaqaqi (R.A.), there aren’t enough words that have been written to honor this soldier-saint and there never will be! It was this heroic martyr who broke ranks with both the corrupt PLO and the compromised “Muslim” Brotherhood, taking his inspiration instead from Ayatollah Sayyed Ruhollah Khomeini (R.A.) and the Islamic Revolution that toppled the tyrannical Shah regime and ended US-‘Israeli’ hegemony over the ancient Iranian nation. As the first Secretary-General of Islamic Jihad said himself, “The Islamic Revolution in Iran directed its first arrows at the West and achieved the first victory of Islam in the modern age.” And also, “Jihad waged by determined strugglers could overcome any and all obstacles from any and all oppressors.” Brilliance emanated from Shaqaqi’s being and he was skilled in everything that he studied, from medicine to physics and mathematics. A true moujahid, he believed that only Islamic Liberation Theology could shake off the shackles of the Zionist occupation and he couldn’t have been more correct. With this thinking, he led Islamic Jihad into a spiritual-political-military alliance with Hizbullah, the Islamic Republic of Iran and the Syrian Arab Republic.

It was none other than Hafez al-Assad (R.A.) who gave Shaqaqi a safe haven to build his group into the powerhouse it is today after he was repressed by the two-faced, sellout Egyptian regime and shunned by PLO-linked hypocrites in Lebanon’s refugee camps. These bonds were cherished by Shaqaqi until the day of his martyrdom at the hands of Mossad in Malta on October 26th, 1995. With Islamic Jihad leading the Palestinian Resistance to victory in the Gaza War of 2012 and playing a major role in the triumph of the ’14 battle, there needs to be infinitely more time given to this legendary and dauntless revolutionary, who survived brutal stints in the Zionists’ dungeons and who is said to have adopted the Shi’a Islamic school of thought in the weeks leading up to his assassination. Like Archbishop Hanna, though Fathi Shaqaqi isn’t mentioned by name on “Eternally Husseini”–he’s featured on my July 2015 album, “Son Of Kufa Volume 1: Rise Of The Anomaly”, in the signature track “Death To ‘Israel”–his vision of ending ‘Israel’, forging both Islamic unity as well as Islamic-Christian unity, reclaiming Islam from what he called “Muslims carrying Saudi books full of lies and baseless charges”, toppling Imperialism and ushering in a new Islamic Golden Age are all concepts that are covered in-depth throughout the album.

On this 69th Nakba Day, let us have a revolution in our approach to the Palestinian cause and the Question of Palestine as a whole, one which is MUCH LESS like the filthy traitors in the “Palestinian” Authority and the toothless, cowardly, Judaized jokes in the “Palestine Solidarity Movement” and MUCH MORE like Archbishop Atallah Hanna and Shahid Fathi Shaqaqi (R.A.) The sooner we follow the example of these giants, the sooner we can cement a global Mouqawamist structure that uncompromisingly pushes for Palestine to be fully liberated and the occupying Zionist Jews to be dispatched to whatever hellhole they crawled out from. May “Eternally Husseini” aid in such a consciousness shift in more ways than one. Insha’ALLAH khair. #EternallyHusseiniComingSoon #HusseiniDayMay25th #MaddCold #HipHopHizbullah #Nakba69 #LongLivePalestine #Ta7yaFalasteen