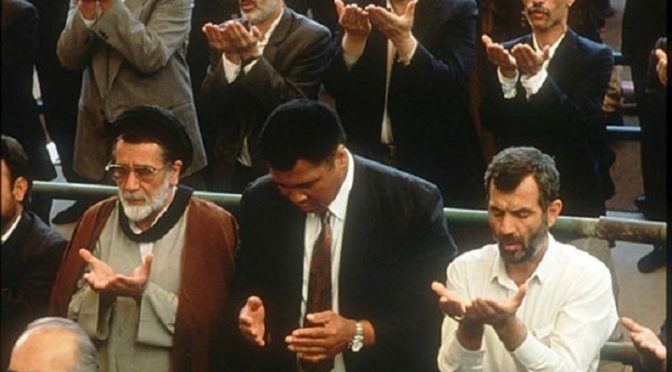 Another reason to love Muhammad Ali and tip your fitted in respect to this crazy-smooth, pugilistically-genius, supremely quick-witted, Islamic Liberationist, firebrand of a man is because of his beautiful solidarity with the Islamic Republic of Iran. Contrary to a 1980 batch of hasbara from AP via India Today that fabricated quotes by The Greatest in which he allegedly declared the Iranian revolutionaries who took over the US embassy den of spies as “fanatics”, Ali in fact had tremendous respect for the Shi’a Islamic school of thought–he also visited the holy Iraqi city of Karbala and prayed at Imam Hussein’s (A.S.) shrine in 1990–and deeply admired Imam Khomeini (R.A.), proving so incontestably and shaming the skeptics, sectarians and Western-Zionist press liars when he visited Tehran for a week in May 1993. During his stay, Ali did Salat with Iran’s brilliant Ulema during Jummah, made a stop at Ayatollah Sayyed Ruhollah’s (R.A.) mausoleum where he laid down a wreath for the father of the Islamic Revolution, met with Iran’s amazingly talented amateur boxing squad and ultimately, established brotherly ties with the most resistant, anti-Zionist and anti-Imperialist nation on the planet.

This event was simply one more testament to Ali’s elevated status as a global revolutionary as well as his principled positions in defense of the world’s oppressed people, for at that time, only 5 years after the GCC-financed, US-Zionist-fueled Iran-Iraq War, the Islamic Republic was being ruthlessly sanctioned and cut off from the rest of the globe. But the Champ of Champs, being, well, THE CHAMP OF CHAMPS, defied the US-UN-AIPAC sanctions, defied the American travel ban, defied the criticisms from the sports community at large and went forward with the journey anyway. Why? Because unlike too many persons in the Ummah today, especially those of the “activist” variety who claim to stand up for the downtrodden but hold their tongues so they don’t offend ‘Israeli’-Saudi-linked community “elites”, Muhammad Ali never forgot the meaning of “La ilaha illallah”, which not only means “There is no God but the One God (ALLAH)”, but also, “There is no authority but the One God (ALLAH)”, and indeed, Ali was not beholden to any authority other than ALLAH (SWT). He did not fear the Zionist-controlled US regime. He did not fear the Zionist-controlled US political establishment. He did not care what anyone thought about him. He only feared God, the Most Beneficent, the Most Merciful, and he only served God, no matter what befell him. And perhaps it this stance, the fear of no man or any earthly power structure, which Muhammad Ali embodied in the most righteous, bombastic, larger-than-life fashion, that we should appreciate most about The Greatest.

It is truly fitting, that Muhammad Ali, a man who championed the oppressed, including the Iranian people, in total rejection of the Anglo-Zionist Empire’s dictations, was taken by Al-Musawwir (SWT) on the same day 27 years ago that He (SWT) took the Ultimate Champion of the Oppressed, Imam Khomeini (R.A.), a saintly, once-in-a-lifetime, history-changing giant who the best boxer ever wholeheartedly revered. Truly fitting indeed.