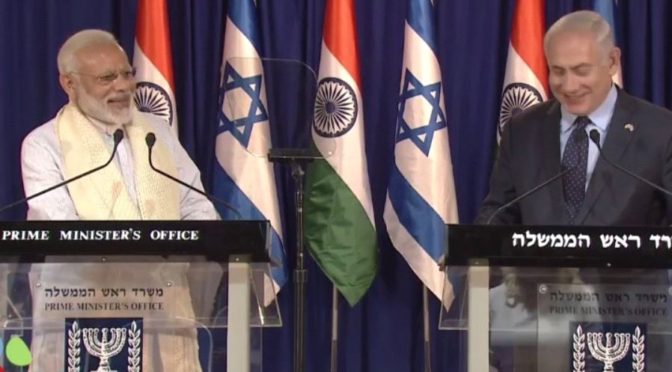 My goodness, will you just look at Modi go! Modi the Magnificent! Modi the Marvelous! Modi the Miraculous! First Indian premier to ever travel to the usurping Zionist tumor and what a spectacle it was. Truthfully, we gotta give Modi the Maggot some major credit, huh? While every one of his predecessors has maintained military-intelligence ties with the ‘Israeli’ enemy going back over 50 years, Modi made history as he took the ‘Israeli’-Indian special relationship out into the open and made the subservience of “Hindustan” to “Tel Aviv” a matter of official policy. CAN WE GET A ROUND OF APPLAUSE FOR THE BUTCHER OF GUJARAT FOR BEING THE BEST “HINDUTSTANI” SHABBOS GOY EVER?! PLEASE?!

In all seriousness though. The “only democracy in the Middle East” meets the “largest democracy in the world” and it is Palestinians, Kashmiris, Pakistanis and Indian Muslims whose blood is going to spill in even greater numbers of buckets as this supremacist alliance deepens. As Modi and Netanyahu traded pleasantries and propaganda, smiling, calling each other “dear friend” and discussing the need for the ‘Israeli’ and Indian intelligence services to cooperate even more closely and extensively in tackling “terrorism”–which is obviously thinly veiled Zionist-Hindutvadi language for continuing the destabilization of Pakistan with the Dragon Policy and expanding the genocidal occupation of Kashmir–an array of 7 wide-ranging, interlinked MOUs were signed in the fields of water, agriculture, space travel, economics, technology, defense and more. The joint statement between the two war criminals actually featured 22 points. Netanyahu the Butcher of Gaza called it a “marriage made in heaven, but we are implementing it here on earth.” In reality however, it’s a match made in Jahannam. Since 2009, as reported by JPOST, ‘Israel’ has been India’s top defense supplier and Zionist weapons, tactics and even agents are routinely found making the lives of Kashmiris a living nightmare. Modi the Murderer has ensured that every bit of this is just the beginning, as he has invited Benny the Baneful to India and the latter has accepted.

What stands out most of all about this disturbing expansion of concrete ties between Zionism and Hindutva is not the open hatred for Islam expressed by those celebrating the “historic event”–meaning both the Jewish supremacist settlers illegally squatting on Palestinian land and the Hindu supremacists terrorizing Muslims in the name of the “Holy Bovine” across numerous Indian states. They were emboldened by the Netanyahu-Modi sideshow and that of course was the plan all long. Rather, it is the unfortunate and upsetting fact that too many Indian “Anti-Imperialists” to count have stood by in silence like voiceless, dazed and confused onlookers, hoping that this will pass and that they can go back to standing with causes which don’t require them to look at themselves in the mirror with indignity. But that simply isn’t going to happen. The ‘Israeli’-Indian nexus is in truth a fully cemented strategic reality for Empire Judaica, not some sort of blip on the radar. New Delhi and the usurping Yahoudling entity are incestuously attached at the hip and for geopolitical and ideological reasons, these toxic and destructive ties will continue to be developed to the detriment of Palestinians and Kashmiris above and beyond anyone else.

The Indian regime is the friend of nobody but ‘Israel’ and the American ZOG. The hundreds of millions of Indian martyrs, including Muslims, Hindus, Sikhs, Christians and others, who lost their lives at the hands of British colonialism financed by the Rothschild family–the Talmudic godfathers of ‘Israel’–are being spat upon every single day that Modi is in power, that his BJP/RSS/VHP goons run rampant against Muslims throughout India, that his Research and Analysis Wing (RAW) engages in cruel black ops and that the illegitimate, artificial, cancerous Zionist regime makes further inroads into the Southeast Asia Subcontinent. And if Indian “Anti-Imperialists” want to keep on pretending that their nation is Mouqawamist–a total insult–or even nonaligned–a laughable assertion–then let us go ahead and lay it on the line without holding back: Whatever blood is spilled by Modi and Netanyahu next, it falls on YOUR heads and YOUR hands first and foremost. Because instead of standing up and exposing Hindutva for the global problem that it is, you preferred to delude yourselves with romantic notions of an imaginary return to a bygone era. It’s not acceptable.

The Syrian Arab Republic and the Islamic Republic of Iran especially should each take note before they begin to feel the brunt of this treachery. It should not be discounted one iota that Ayatollah Sayyed Ali Khamenei made it a point to reiterate the Iranian commitment to the Kashmiri struggle and to call on all Muslims to support Kashmir right as Modi was making his final preparations to enter Falasteen and meet with Earth’s Most Evil. Are you standing up and fighting or sitting down and watching? Verily, that ***IS*** the question. Death to the cow-piss-drinking Hindutvadi regime. Death to the Goy-baby-blood-guzzling Zionist entity. Free Kashmir. Free Palestine. The worst curses ever concocted directed at the Indian-‘Israeli’ alliance. And infinite shame on every traitor, collaborator and coward who refuses to take action in the face of such an abomination. Infinite shame indeed.