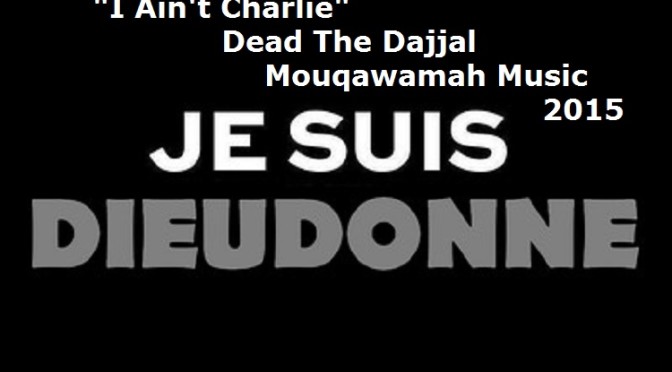 Mossad did it let’s get it outta the way/More obvious than gray skies on the cloudiest day/ Takfiris are the very scoundrels you pay/So like “Death to Israel!”, “I Ain’t Charlie!” loudly and proudly we say/Muslims would die for our Prophet but your filth is just a cartoon?/Well, what they ain’t telling you when you go whaling, sometimes you get the catch, and other times you catch the harpoon/So no, I don’t feel sorry for y’all/When you never gave a shit about our Brown and Black bodies at all/Look how many in Pakistan, Afghanistan, Iraq, Libya, Syria and Yemen you deaded/But you hold superior morality ‘cause you defend the wenches in Femen?/Right to insult Muhammad and Christ are forever embedded?/But exposing Jewish wealth and power is “anti-Semitic”? Pathetic!/

Compact, tight cell of a black site jail is where I’ll be derided and torn apart/Just for pointing out that 6 million Jews didn’t die in the Holofraud/This right here for the demons is a question/If I can’t engage in history’s revision then it ain’t no mystery you really don’t believe in freedom of expression/You distort our Book and you roast our Prophet/But when we note human soap hasbara is a potent toxin/And the gas chambers are truly a bad faking, we’re supposed to stop it?/Shabbos goys, y’all front too hard/Like secularism and human rights be your true gods/Don’t even kid yo, we both know that the Jews are/And that you would give your life for their Zionist regime/While your own country burns in the fire of their schemes/

To the Western youth, let me please redirect your views, ‘cause they got skewed with a pack of lies/Vision twisted through sick Orientalism so you think that, it is only terrorism when a Jew or a cracker dies/Do you feel the fury? Tell me do you get the picture?/Millions scream from Chechnya to Niger against the manic band that dares to diss the Scripture/ Let me make it clear, I would rather slit my wrists up/before I become a slave to CRIF and LICRA/East-West clash, you don’t think we know the plan in your head?/Anti-Black bigots you are hideous, basically the Klan with frog legs/That ain’t art, it’s perverted and it’s monotonous/Jewish patrons made you and paid you off to turn the Curse of Ham to a comic strip/The Subversive Clan of Apocalypse, they are so debauched and deranged/War criminals stomp and they screech, saying that they’re marching for “peace”, this entire lot is depraved/Not a troglodyte yo, I follow the Light of Muhammad and I Hira storm coming but still I am not gonna cave/Jihad is our unstoppable aim/‘Till Georges Ibrahim Abdallah is no longer locked in a cage/So no, I won’t give an apology/‘cause even you hell-dwellers know that it’s chicanery/And no, I will not condemn and I won’t get terrorized/‘cause I don’t think within the parameters of your cowardly and broken paradigm/“Free speech” this you peewee twits: any Jew that doesn’t believe in the total liberation of Falasteen, is complicit in Zionism’s ferocious genocide/across our lands, look what you mangy hateful devils have unleashed/Israeli-NATO rebels on our streets/Lynchings, destruction, and vicious abductions, malicious corruption/Saying “fuck yeah!” to Takfir, it is disgusting/ Killing the innocent women and children in sickening numbers, this is your function/Water is off and the slaughter moves forward as if we are insignificant nothings/Conspiring colonial Leviathan, you should not have been fiddling here/You’re out your head yo, hell no I ain’t Hebdo! I am more like little Abeer/Never barter for our martyrs and for them I will spit more raw/Walk through Jewish Paris with “Je suis Dieudonne” on my tee just to piss y’all off/