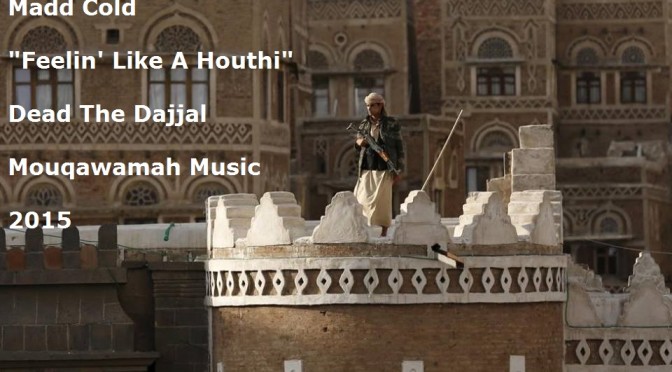 Sandals on our feet, daggers in our belt/We ain’t come to the world and start nagging it for help/Six wars we have endured and when the Saudis came, we proudly blazed ‘em alone, hammered ‘em and staggered ‘em, they knelt/They learned the consequences of daring to mess with the Houthis, we ain’t gonna have it in our realm/Left Saada a horror, there ain’t no winning lottery, it’s destitution/So you better believe we fought back properly for retribution/ Discriminated against and disenfranchised/“Tools of Iran”? Who you trying to fool, only stooge here is you, of the yahoud, so quit your damn lies/Telling you now Riyadh, hegemony is over with/Yemen was never a piece of real estate that you could just maintain endlessly in ownership/Defy your disease, our Remedy is Ultimate (SWT)/

HOOK (2x)
Stand up if you’re feelin’ like a Houthi
Your coalition of cowards, it doesn’t move me
Our resistance, that’s why you lose sleep
We’ll defeat Sahyouni Saudi

Let us take a little trip down memory lane/When we inflicted upon you the heaviest pain/I can say sternly your casualty count was well over 130, rest had to run for their lives/You invaded Yemen to dominate but we are the ones who have thrived/Ansarullah is the name so you better kick it right/Now you invade again, this time in the thick of night/You really must be hysterical then, ‘cause you got your tyrannical friends together like they were NATO to sit around in a room/As your bombs target, women and children who are starving, apartments along with markets that are crowded at noon/Cowards, all of y’all are shady, lost and frail/Could not crush us so you kill civilians, looks like the Israelis taught you well/

O’ kings and emirs, fronting like strong but you’re harmless and wimps/Worried that we take Bab el-Mandeb and then we send arms to the Strip/O’ kings and emirs, where were you when there was crying in Gaza/That’s right, you were on the side of the monsters/
Zion’s lapdogs, lying, fat hogs scheming, you’re a lame lot/Launch “Decisive Storm” against us but Palestine ain’t even get a rain drop/Can’t halt our advance but you thought that your plan to level Yemen would work/I’m the victims of the Hajjah camp massacre, resurrected in verse/Lanat’ALLAH on the House of Saud, let the revving vengeance from the Seventh Heaven disperse/Angels beside us, as the bullets from our weaponry just flows you are goners/Ready to die in the fight against Empire Judaica, it’s our destiny to go as Shouhada/