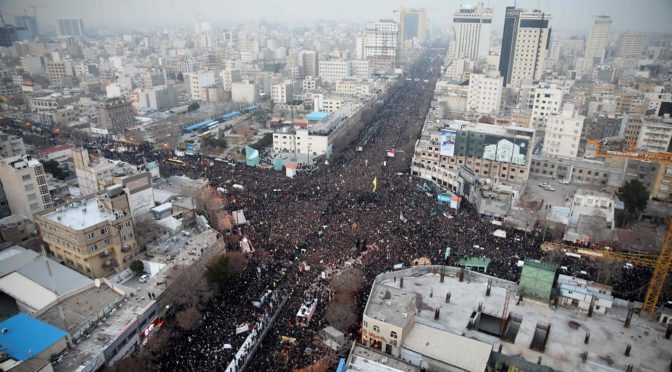 It started in Iraq, where we are told Qassem Suleimani (R.A.) was responsible for killing protesters–one of what seems to be a never-ending, increasingly hideous wicker-basket of lies about the Master Moujahid from Kerman. Hundreds of thousands in Baghdad in addition to hundreds of thousands more in the holy city of Karbala came to mourn and grieve his martyrdom, while also celebrating his achievements and calling for both the US ZOG and the Jewish supremacist colonizers in Palestine to pay for their crime.

Then it crossed the Iraqi-Iranian border into the southwestern Iranian city of Ahvaz and the body of the Quds Force Kehilla-Killer (R.A.) was greeted by millions — we’ll say it again, MILLIONS — of his countrymen in mourning and energized to exact vengeance on their Commander’s murderers. A sight to behold and then some. This is of particular significance too because Ahvaz has been depicted in the Zionist media as “anti-regime” and its population, we were told, has faced “IRGC repression”. Nothing could be further from the truth. The Ahvazis, regardless of many being Sunni and Arab, love the Sanhedrin-Slayer (R.A.) as much as any Shi’a of Persian extraction or otherwise. The Parasites and their proxies will always fail to understand that Iran and the sectarian divisions they spend so much time stoking through their think tanks only exist in their “Torah”-poisoned imaginations. Iran is as unified as ever. Verily, it looks like that US-Zionist-Saudi-Emirati terrorist attack in September ’18 didn’t scare the Ahvazis into submission, nor into launching a color revolution on Zion’s behalf after all.

And we haven’t reached the ending yet, no. Because from Ahvaz, Suleimani The Slain Gunslinger (R.A.) was moved to the holy city of Mashhad. Millions more were in attendance. Now he’s in the Iranian capital city of Tehran (seen in the featured picture), where there are TENS OF MILLIONS in the streets, creating a literal human ocean of mourners. We were told by World Zionism’s press after Imam Khomeini (R.A.) was called up by Malak al-Mawt (A.S.) on June 3rd, 1989, and tens of millions flocked to mourn him, that nothing like it would ever be seen again. But it is being seen again. Right here. Right now. With the perennial soldier of Sayyed Ruhollah (R.A.) and his Islamic Revolution, Hajj Qassem (R.A.) Estimates from inside and outside Iran, confirmed by Mouqawamah Music, put the numbers around HALF THE COUNTRY AT LEAST. That’s 40 million people. That’s 40 million sets of eyes shedding 40 million streams of tears. And there are still stops to be made in Qom and Kerman. What was that you said again, American ZOG? Orange Oaf? Pompeo the Pudgebucket? Hmmm?

Moral of the story: Hajj Qassem (R.A.) isn’t merely liked, appreciated, adored or venerated… He is LOVED. So loved that every funeral mourner present would’ve gladly sacrificed their own lives and those of their families just so the Knight of Kerman (R.A.) could still be with us in the physical–as he gave his own existence for them. And that’s the central thesis ensconced in our coverage of the Quds Force Chief’s (R.A.) martyrdom over the past few days, isn’t it?

Sure, the most effective Anti-Zionist military personality in history was assassinated. But this man was the most popular figure in all of Iran, with a whopping approval rating of 82%. It’s reflected in the sheer volume of individuals on the streets to bury him. We’ll spell it out for the Zio-Imperialists gnashing their teeth as they read: That’s an innumerable number of Qassem Suleimanis (R.A.) waiting to claim their own place in the sun; waiting to write their own stories in the Pantheton of Mouqwamah Martyrs which includes their source of inspiration, along with his partners, Abou Mahdi al-Mohandes (R.A.) of Iraq; Hajj Imad Mughniyeh (R.A.) and a slew of Hizbullah commanders of Lebanon; Fathi Shaqaqi (R.A.) of Palestine; Sayyed Hussein al-Houthi (R.A.) of Yemen; and more.

Clinton or Bush. Obama or Trump. Peres (L.A.) or Barak. Sharon (L.A.) or Olmert or Netanyahu. These Monsters will just never, EVER grasp it.

You can kill the revolutionary. But the ideals of revolution he or she represented, will burn brighter than the white phosphorus shells of the enemy that burn the flesh of innocents.

You can stomp out a band of resisters. But the spirit of resistance they awakened in the downtrodden they campaigned for with their blood, will only knock more vociferously.

You can instill hate, fear and terror in any given native population. But the love they feel for their ancestors, their land, their faith and their families, will always be there to counter, co-opt, cull and ultimately center those concepts back into place as fuel for the defense of everything they hold close to their aorta.

Especially when that love is a companion to a fear of only ALLAH (SWT) and a desire to achieve martyrdom like Imam Hussein (A.S.) when he ran towards it on the plains of Karbala. This was Suleimani’s (R.A.) model. Suleimani (R.A.) put his love into high gear and now it is being reciprocated by those who emulate him, humiliating the Empire of Parasites in the process.

“You cannot kill what cannot die”, I rhymed on my record, ‘When The Rocks & The Trees Cry’.

And that undying thing is the will to stand up to oppression–it is indeed as eternal as the heavens.

Therefore, when we say “long live Hajj Qassem Suleimani (R.A.)”, we aren’t saying so poetically. We’re saying so because whether breathing or martyred, he ain’t going anywhere. Neither is the Islamic Revolution he fought to protect and fortify into the force that will one day imminently liberate Palestine from the Judaic invaders. And if you don’t believe me… Ask the Iraqis and Iranians that the Tangerine Twit and Pompeo the Puke want you to think don’t exist. Then again… Following everything documented in this piece here… The answer to the aforesaid inquiry really should be unequivocally apparent.