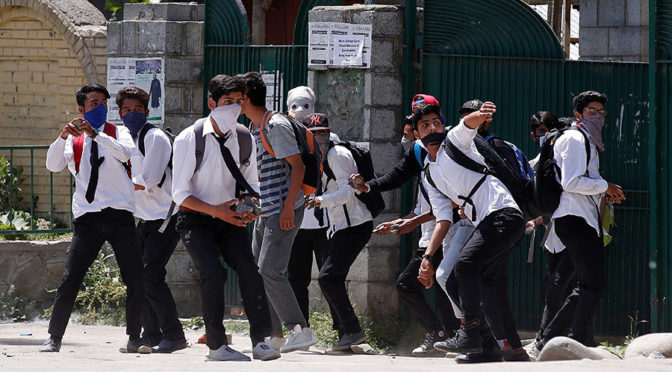 Normally, young people are expected to hold a pen in hand and write their own ‘destiny’ of progress and development, but here in Kashmir you will witness stones in hand to hurl at police personnel; to take vengeance for people whose blood was spilled across the Kashmiri region; and of course, to fight for the cause to liberate Kashmir from the hands of Indian occupation.

Interestingly, there are two themes discussed in various online debates between revolutionary young people who supposedly ‘run parallel government’ by closing down entire business establishments after Friday prayers in Kashmir and, of those who are attending college regularly, claiming to have meaning or sense of life by entering into ‘bureaucracy’ as one of their career options.

There is one thing in common among these two groups, both can become leaders in their work, and aspire to fight for equal rights of people, for dignity, but there is a slight difference: One group is appreciated while the other is demoralized and dehumanized.

The young people have always yearned for direction from religious leaders, inventing political philosophies of ‘hartal’ as a way of ‘resistance’ and ‘stone pelting’ to align various kinds of ideologies as a means of consolidating support for their ‘mission’ to ‘decolonize Kashmir’ from India.

This generation is often called ‘miscreants’ or ‘frustrated unemployed youths’ who have started stone pelting from scratch and now are the vanguard of the resistance movement in Kashmir. Most of them are the products of middle class families and the majority of them have survived from direct attacks, physical violence and tortures. Indian occupation soldiers have bruised their bodies with bullets and batons but their ideology remains unchanged.

In this age of Zionist mass media that has failed to highlight the ‘woes’ of Kashmir’s stone-pelters, treating them as alien, they often take refuge in technology and social media to spread their message of resistance to gather support of various people across ‘J&K’ and the world; take inspiration from various ‘revolutionary’ situations of the ‘Middle East’ and West Asia that have plunged the world currently into an utter chaos. Spinning in a frenzy of warfare, young people are looking for meaning or sense of life. The ‘sense’ that will legitimatize our struggle, and free us from all woes to see a new dawn of ‘free land’ from Indian occupation.

The current misrule of the Indian state by killing more than 100 Kashmiri and wounding more than 7,000 people after Burhan Wani’s martyrdom exposes the state’s inhumane treatment towards civilians who are subjected to torture and arbitrary arrests without fair trails.

The government has failed to understand aspirations of young people, and failed to handle the situation with a heart and used brutal force to kill and maim civilians unabated. The government in Kashmir is visible at the time of election and voting and when it comes to protecting civilians, they start blaming the union of India for promoting violent means of actions against peaceful protestors. The government should embrace the ideological point of action tha ‘India is to Kashmir what the British were to India’.

For the resistant people, the ongoing critical moments are not to weaken the movement but encourage the movement in one way or another. Such moments will arise in the future but the youth should rise up and be cautious of being diverted from the uprising. Revolution is loading, all the moments are set now. The most important caliber we lack is to be “Islamic rather to demand for Islamic”.

We want an ‘Independent Kashmir’, which the state of India had promised us in the beginning of the ‘grand bargain’ under which Kashmir acceded to India in 1947. Until that happens, Kashmir will witness more tense situations and public demonstrations.