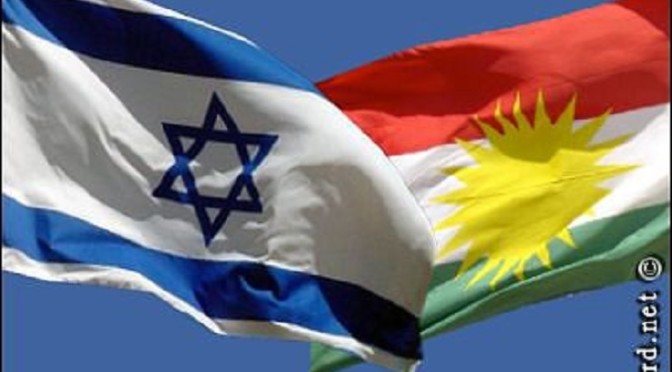 Using a “more detailed and thorough examination” than any other previous engagement with the topic, the two colonizer scientists said that they were “surprised” to find a greater similarity in this instance than the alleged link shared by Jews and Arabs–thus inadvertently eviscerating the long-standing Zionist propaganda line that ALL Jews, and not merely Mizrahim, are indigenous to the land and thus bear greater resemblance to Palestinians than even other Arabs. A distortion and a fallacy of the utmost distinction, for sure. They also noted that the conclusions were arrived at by documenting the “frequency of genetic mutations” occurring within each of the respective groups. So if I call ‘Israeli’ and Kurdish terrorists who have a penchant for enthusiastically engaging in ethnic cleansing, “mutants”, at least now I know that my pejorative titling isn’t exactly so pejorative but rooted in science. Alhamdulillah.

I kid, really. What isn’t a laughing matter however is that these “familial” ties have undoubtedly been used by the usurping Zionist regime to dig its claws deeper into the Kurds, bringing them further and further into the Oded Yinon stratagem as well as increasing their own propensity towards ethnic chauvinism. And like the “Ashkenazi Zionist Eraser” explained by Professor Sami Shalom Chetrit, i.e. the maneuvers undertaken by Zionism’s early Ashkenazi “elites” to wipe out the “Arab-ness” or “Eastern-ness” of Jews from in and around the Islamicate, the newly invented concept of “Jurdishness” very well be yet another tool used by the ‘Israelis’ to bring another ethnic group outside their “chosenite” parameters… Inside.

Let it also be noted: The irony isn’t lost on us that a study about two groups involved in wanton ethnic cleansing on Syrian soil; two groups who identify as separate and superior to others; and two groups who attribute their “uniqueness” to concepts akin to black magic, “chosenness” for the Jews and “people of the Jinn” for the Kurds… Was, again, produced by Hebrew University, the occupation institution which helped confiscate Palestinian books in the Nakba, trains IOF soldiers, works closely with Unit 8200 and Talpiot, etc. On top of ironic, it’s despicable.

Before we move any deeper into this analysis, we must stress that we don’t oppose either World Jewry or various Kurdish political entities because of where their blood may or may not flow from. Not at all. Nor will we ever. This sort of European-colonialist-derived racialism/racism has no place in any liberationist discourse, especially an Islamic one. Islam categorically rejects racialist/racist ideas. We oppose them both because of their ideologies and agendas which seek to subjugate a multitude of different peoples and areas – in the case of the former, it’s the whole planet – in the name of upholding their particularist endeavors. The purpose for bringing this revelation to light is that perhaps Kurds see themselves as more connected to Jews than their TRUE blood brothers, Iranians, as well as their TRUE cousins, Arabs and Turkmen, because of this Zionist “scientific discovery” and now find themselves drifting so far into Shabbos Goyhood that they can’t ever get out.

Perhaps this “Jurdishness” is the reason why the Judeo-Freemasonic-Zionist Young Turks utilized Kurdish militias to help implement the Armenian Genocide. And perhaps it is this “Jurdishness” that has guided the Barzani mafia to work with Mossad since the earliest days of the usurping Zionist entity; that has led the YPG/PYD into doing ‘Israel’s’ bidding in Syria, balkanizing the north to establish a mythical entity called “Rojava”; that has led the PKK into accepting ‘Israeli’ military support to continue destabilizing Turkey; and that has led PJAK to become the illegitimate Jewish regime’s top proxy in attacking border areas inside the Islamic Republic of Iran. This ain’t “anti-Kurdish bigotry” or “Kurdophobia”.

It’s all facts, documented long ago here on Mouqawamah Music before. As well as Mask of Zion. As well as Mark Glenn’s The Ugly Truth. As well as the YouTube channel of Mimi al-Laham aka Syriangirl aka Partisangirl. As well as a fantastic, heavy series by The Rabbit Hole’s Sarah Abed–pieces that have been spread out across multiple websites, translated into numerous languages and received hundreds of thousands if not millions of views. One can’t claim ignorance when it comes to Kurdish designs on our region, for they are a mirror image of the Halakhic-Talmudic Tumor’s and were actually CREATED by that very aforementioned malignant growth. Indeed, one cannot claim ignorance anymore.

Or perhaps the conceptualization of “Jurdishness” isn’t a Zionist “scientific discovery” but rather, more probably, Zionist junk science. Like Zionist junk archaeology, which the ‘Israeli’ enemy has utilized to justify its theft of Palestinian, Lebanese and Syrian land as well as Iraqi artifacts for decades. Kurds were betrayed by the Brits, abandoned by America, and are now being pimped out by ‘Israel’. They can all rest assured, the moment in the unlikely event that “Kurdistan” is created–la samah ALLAH (God forbid)–‘Israel’ will move to install 200,000 Kurdish Jews in the territory and ethnically cleanse all the Kurdish Muslims, Ezadis, Christians and Shabaks. ‘Israel’ doesn’t give a damn about Kurds. Like it doesn’t give a damn about any Gentiles. Whether there are actual Kurdish-Jewish genetic ties remains ambiguous at best and ultimately… It’s irrelevant. Because unless every Kurd in “Kurdistan” and “Rojava” plan to convert to Judaism, they’re just pawns for the “Eretz Yisrael” plot. No doubt their status as the crème de la crème of Kosher Gentiles is currently intact. But ‘Israel’ burns everyone in the end.

As General Hurr (R.A.) showed on the plains of Karbala on Ashoura, it’s never too late to do the right thing. The Kurds have a chance to change history, not to mention their own destiny, and collectively reject the Zio-Tumor and the system of Dajjal as a whole. If they decide otherwise, in favor of continuing on the path they’ve been on for the last 70+ years and serving at the pleasure of the Zionist Imperium… Well. I guess they really will be the Jurds and the joke is gonna be on them after all.