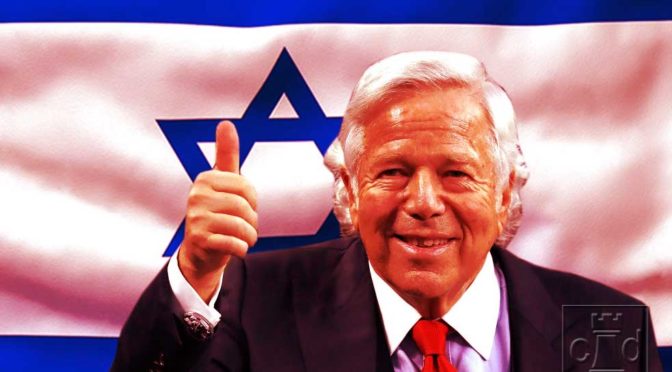 Based on the recipients of his hard-stolen monies above–yes, hard-stolen, he’s made his billions through manufacturing and real estate swindles via the Kraft Group–obviously this is a very Jewish man who is very much committed to defending ‘Israel’ and upholding the hegemony that International Jewry has imposed on this blue and green ball of water and rock. Indeed, as the Jewish Daily Forward notes, “Kraft is an openly observant Jew who has focused his philanthropy on Jewish causes, giving a reported half a billion dollars to charitable groups, with a focus on Jewish and ‘Israeli’ organizations.” Got that ladies and gents? Half a billy to his Yahwehist willies and nillies whilst keeping kosher at that! The same Forward piece goes on to defend Kraft and his degeneracy, citing award-winning professor, author and former President of the Association for Jewish Studies, Dr. Judith Baskin, who says, “the Talmud draws a Halakhic line between what is ethically preferred and what is legally permitted, with prostitution falling into the second category.” It quotes Rabbi Hanina in Kiddushin 40A of the Talmud too, basically saying that paying for sex is fine if you’re avoiding incest and as long as it isn’t a Jewish prostitute. Gentile whores? Cool. Jewish whores? Not so much. Because a Jewess can’t and shouldn’t be defiled in the same fashion as a “Shiksa”. Again folks… We present to you the Talmud… And the “enlightenment” of Jewish thinking.

Notice Bashkin’s lingo though. “Halakhic”. Meaning Halakha. Meaning “Torah”. And verily, much to the astonishment of this writer, the Forward goes to the “Torah” for “wisdom” as well, bringing up “Tamar, who disguises herself as a prostitute and successfully solicits her deceased husband’s father for sex, so determined is she to have a child by that bloodline. Her father-in-law moves to have her burned to death for prostitution, until she reveals that she was the disguised prostitute he slept with. Not only is Tamar praised, Judah looks foolish.” Then the Forward invokes Rahab, who “shelters Israelite spies in her home, and in turn is saved when the Israelites ransack the city.”

Great examples admittedly, and an inadvertent nod to the relationship between Jewish women (or female agents of Jewry) using sex for espionage, but a smokescreen regardless. For the Forward, in typically deceptive fashion, is leaving out the Grand Mack Momma of ’em all. The one that started everything. The Mother of Jewry. The Matriarch of ‘Israel’. And the world’s very first “elite” prostitute. The Forward didn’t dare mention her name because that would cast a rather wrath-incurring and all-consuming light on the very foundation of Jew-Deism, now wouldn’t it? We of course are talking about “Sarah”, the wife–and, disgustingly enough, sister–of “Abraham”, who, in this context, can accurately be described as the world’s first pimp.

Yes brethren, “Abraham”, the “Patriarch of Patriarchs” in Judaic tradition, puts his wife on the block to do a little hookin’. Genesis, Chapter 12, verses 11-16, disclose that a famine forced “Abraham” and his family to flee from Palestine to Egypt and to avoid conflict, “Abraham” makes “Sarah” use her beauty to join Pharaoh’s harem and deceive the Masri tyrant about “Abraham’s” true intentions by telling him that she and “Abraham” are merely siblings. Pharaoh is quite pleased with the merchandise and in exchange, he gives “Abraham” camels, donkeys, sheep, oxen and male and female servants. Guy forces his wife (who is also his sister) to submit herself into a life of sex slavery so he can save his own ass. Plus he gets some animals and hired help outta the deal. What a “mensch”!

But wait! It ain’t over! Because he pulls the exact same “menschian” move again with King Abimelech, the despot of Gerar. One can only assume that once one starts hookin’, one must keep bookin’! Genesis 20, verses 1-7, say that once again, with his life in jeopardy, “Abraham” pimps “Sarah” out to Abimelech and tells her to pretend as if she is solely his sister, not his significant other. The Gerar monarch falls for it–though he is said not to have engaged in intercourse with her due to a warning from the Jewish “god” Yahweh. Oddly, this seems to be contradicted by later verses in the chapter which say that Abimelech and his wife get sick from the whole ordeal. Applying logic to the matter at hand, did in fact prostitute “Sarah” sleep with the dictator and give him and his significant other an STD? Wouldn’t be the first time a working girl gave a john more than what he paid for!

No doubt that all of this is as vulgar as it is ridiculous, but this is the tea we’ve been served. To any religious and non-religious brother reading… Ask yourselves the following: Would you, as a decent human being alone, pimp out your wife to somehow counteract your transgressions? What of your sister? Daughter? Your niece? Your mother? Of course not. And for the record, none of you would marry your sisters either–except those of you on trailer parks in the backwoods of West Virginia. May God Almighty guide y’all. As for everyone else, again we reiterate, of course not. Now… If you wouldn’t… As a decent human being alone… What makes you think that a Prophet of ALLAH (SWT), endowed with the knowledge of the Unseen, the ability to perform miracles by The Most High’s leave, and the revelation… Humanity’s most upright people… Humanity’s guidance… Humanity’s DEFENDERS… would? The answer, most certainly, is… They would not.

Thus, since they wouldn’t… The “Abraham” described in Genesis isn’t Ibrahim (A.S.) at all, is he? Negative. And the “Torah” that describes him in this abominable manner, isn’t Al-Tawrat, is it? NO. And just so we don’t upset the Gender Discourse Police, allow us to add that the “Sarah” who’d whore herself out for this sorry excuse of a man, this pimp, “Abraham”, isn’t the righteous and pristine Sarah (A.S.) saluted by Islamic tradition, now is she? Not at all. Taking these bitter but wholly sound realizations into account then, why the reluctance to offer up critiques of this blatantly unholy text, even in a less harsh way than what is contained herein?

On the other side of the equation, considering how integral prostitution is to Judaism as per the aforementioned decrees of the “Torah” and its narratives about “Abraham” and “Sarah” as well as Tamar and Rahab, who can blame Robert Kraft, an “openly observant Jew”, from seeking nooky-by-cookie? He’s just following in the Halakhic footsteps of his “Patriarch” and abiding by the “wisdom” of his Talmudic scholars, ain’t he? Simply put, Judaism permits prostitution even though secular law in most of the predominantly Christian West does not. And as we know, when it comes to legalities, the “Torah’s” trumps the borders’! This is illuminated further by the fact that the Genesis Prize Foundation–a Jewish-Zionist vomit-dump connected to the Jewish Agency and Netanyahu’s office which hands out the “Jewish Nobel”–said that despite Kraft’s “unfortunate” circumstances, it is sticking with him and will keep him as this year’s recipient. “Unfortunate”, they say! Yes, “unfortunate” solely because Kraft got caught with his pants down! Was that pun too cheap? Cheaper than say… A street-walker? Sorry folks, we couldn’t help it.

Back to business, who runs the Genesis Prize Foundation, you ask? The Russian-‘Israeli’-Jewish energy and public relations tycoon Stan Polovets… And… Morris Kahn. Yes, that Morris Kahn. The ‘Israeli’ demon who founded Amdocs, which collects processing data for 90% of the calls, emails and texts in America, including several federal agencies, and which housed a great many of the ‘Israeli’ spies and explosives experts posing as art students caught on the day of the Jewish 9/11 false flag. This means that Kraft isn’t just some large-living, “chosenite” money-man who sends his football players on field trips to go shooting with IOF in occupied Palestine, as hideous as that is, but a high-level Zionist intriguer very much connected to the most powerful personalities of Empire Judaica. The Genesis Prize Foundation, as a functioning organ of ‘Israel’ and the Jewish Power Matrix, has an easy message for all of us to read and comprehend: Cop an escort, get an award. And why not? The “Torah” says it’s kosher!

To conclude, we address those who will inevitably object to this entire line of analysis. Please, allow us to get something straight as newly-minted Samurai steel: Jonathan Azaziah didn’t write those God-forsaken words that comprise those God-forsaken narratives and fake histories in that God-forsaken book. The rabbis did. Blame them. Not those of us with the courage and Islamic insight to recognize a fraud–the very fraud we’re told of in the Holy Qur’an, because the Jews aren’t just repeatedly condemned as the “Killers of the Prophets”, but those who “forged lies against the Prophets”–and call it out as exactly that. As for Kraft? Hmmm. Looks like his Judaic jaunt in Jupiter didn’t get the happy ending he was looking for. Literally… And figuratively. That matters not to the Kehilla though. Because in their eyes… He was only doing what any good Jew would. This is the intrinsic immorality of the JNWO. This is what we’re fighting. This is the only target–the only bullseye. Aim your arrows accordingly… Or put down the damn bow.