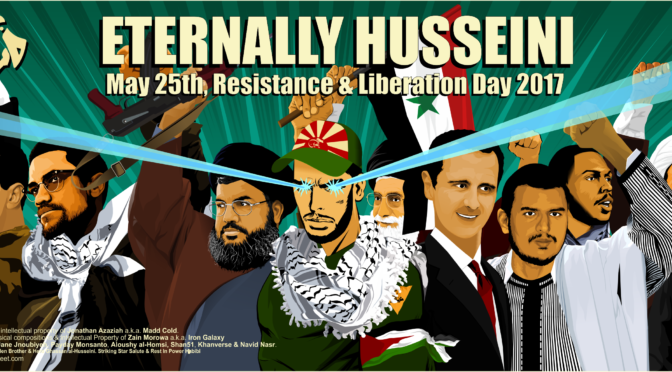 “Eternally Husseini” is offically recorded in its entirety! I’m done! Alhamdulillah ya Rab! And so, as the mixing and mastering process now begins, I’d like to announce the ironclad release date for the album: May 25th, 2017, Resistance and Liberation Day. Yes, Iron Galaxy and I picked this holy and historic occasion for the day we drop our record because just as Hizbullah liberated Lebanon from a 22-year Zionist occupation and killed ‘Greater Israel’ dead, we hope these 15 tracks will not only raise further awareness among our ranks, but also set off a chain reaction which will birth an Anti-Parasitic Hip-Hop movement determined to free our music and culture from Jewish/Corporate domination. I’ll be releasing individual promo pieces of each one of the revolutionary figures you see here (and a few other surprises) at least once a week until “Eternally Husseini” drops. I would be under-selling the living daylights out of it if I just tell you that the record is dope, that it’s just fly as skies set ablaze or that it’s just ill as hospitals with a dire medicine shortage. It’s next-level all the way around and y’all are gonna flip like acrobats on angeldust when you hear it. TRUST.

With that said, allow me to send a GARGANTUAN Striking Star Salute to everyone who participated in the making of the album, ’cause I couldn’t have done it without y’all: Trevor Labonte, who absolutely and epically slaughtered the guitar on my 9/11 magnum opus “Fifteen Years Of Hell”. Navid Nasr, who brought cool, eloquence and ultra-class to the record’s painful, heartrending Yemen anthem, “Ali al-Tawaari’s Vengeance”. Nashid Abdul-Khaaliq, who delivered wisdom, power and brilliance on “Who Do You Fear? (Shirk Nation)”, a scathing assault on the hypocrites of “The Ummah”. Yusuf Abdul-Mateen Trombly, Rafiqi Green and Khanverse KV, who brought beautiful brotherhood, unity and lyrical mastery to “Silence On The Sheikh”, our call to free Sheikh Ibrahim Yaqoub al-Zakzaky from the tyrannical, terrorist Buhari regime. FREE ZAKZAKY BY THE WAY!! And last but nothing even close to least, a special shout-out to Mohammad Hamza of Intifada Street, whose incredible artwork (as you can see here) took this entire project to mesospheric heights and through his visuals, inspired me into penning some of my finest bars to date. Much love to you my dearest brothers and thank you again, so much, for being part of this. #EternallyHusseiniComingSoon #HipHopHizbullah #MaddCold #HusseiniDayMay25th