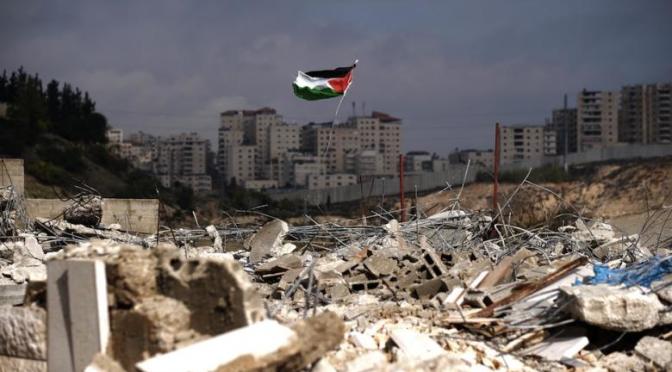 Medics said Muath Nouh al-Rajabi was moderately injured after being stabbed in the thigh and shoulder, and was taken to a nearby public hospital.

Al-Khalil, also known as Hebron, is home to roughly 160,000 Palestinians and around 500 Zionist settlers, who live in a number of illegal settlement compounds heavily guarded by Israeli troops.

Zionist settlers live in the center of al-Khalil’s Old City, after a 1997 agreement that split the city into two areas. H1 is under the Palestinian Authority control, and H2 is under Israeli military occupation.

The Israeli military-controlled H2 zone includes the ancient Old City, home to the revered Ibrahimi Mosque – also split into a synagogue referred to as the Tomb of the Patriarchs – and the once thriving Shuhada street, now just shuttered shops fronts and closed homes after Palestinians ran out of business.

Since the 1994 massacre of 29 Palestinian worshipers inside the Ibrahimi Mosque by extremist Zionist settler Baruch Goldstein, Israel has kept Muslim and Jewish worshipers segregated.

The news came a day after two Israelis assaulted Palestinian workers at a gas station in the village of Ein Karem in Occupied Jerusalem.

Mutasem Issam Shweiki, 24, and Shadi al-Mashni were hospitalized following the attack and treated for bleeding from the mouth, nausea, and bruising.

Ein Karem, believed to be the birthplace of John the Baptist, was a vibrant mixed community of Palestinian Muslims, Christians, and Jews before the majority were forced to flee amid an attack by Zionist militias in 1948.

In 2013, there were 399 incidents of settler violence against Palestinians in the occupied West Bank, according to the UN Office for the Coordination of Humanitarian Affairs.

Meanwhile on Monday, Ghassan Daghlas, a Palestinian official, said that Zionist settlers have been expanding an illegal settlement outpost in the northern West Bank.

Daghlas, who monitors settler activity in the northern West Bank, told Ma’an this was the second day in a row that settlers had leveled land to expand the outpost of Ahiya near the Palestinian village of Jalud.

More than 600,000 Israeli settlers, soaring from 189,000 in 1989, live in settlements across the West Bank and occupied East Jerusalem, in contravention of international law.

Some settlers act without approval to expand settlements or create new ones in the West Bank, building outposts that are illegal even by the Israeli authorities’ standards.

In most cases these settlement outposts are “legalized” by Israel, and in rare cases they are dismantled.

Meanwhile, Palestinians are rarely granted permission to build in the 60 percent of the West Bank under full Israeli military control, or in East Jerusalem.