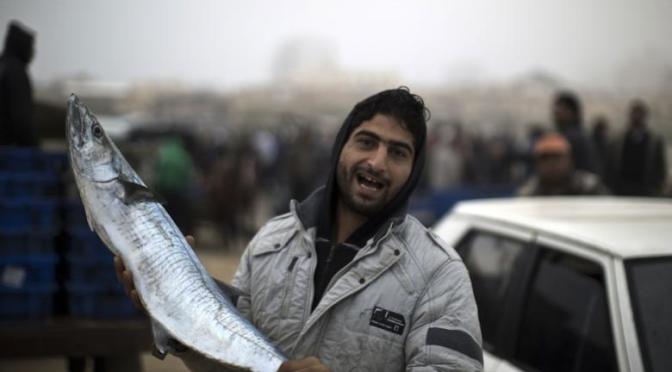 The witnesses said Israeli forces shot at the boat until it caught fire, and that fishermen in a nearby boat managed to pull the injured aboard and escape under heavy fire.

The injured fishermen were taken to the Abu Yousef al-Najjar hospital in Rafah.

An Israeli army spokeswoman told Ma’an that navy forces allegedly identified a Palestinian boat entering Egyptian territorial waters around 10:00 pm Sunday, and that upon its return to Palestinian waters the forces called on the boat to stop.

When the boat did not stop, the naval forces opened fire at the boat, “identifying a hit.”

She confirmed that the boat caught fire and said that Palestinians “were seen jumping into the water.”

Israeli forces believe the incident is “probably a potential smuggling,” the spokeswoman claimed.

For 51 days this summer, Israel pounded the Gaza Strip by air, land and sea. More than 2,160 Gazans, mostly civilians, were killed and 11,000 injured during seven weeks of unrelenting Israeli attacks in July and August.

The Israeli offensive ended on August 26 with the an Egypt-brokered ceasefire agreement.

The truce calls for reopening Gaza’s border crossings with Israel, which, if implemented, would effectively end the latter’s years-long blockade of the embattled territory.

In addition, the ceasefire agreement stipulated that Israel would immediately expand the fishing zone off Gaza’s coast, allowing fishermen to sail as far as six nautical miles from shore, and would continue to expand the area gradually.

However, since the ceasefire was signed, Israeli forces have fired at several fishermen who they claim have ventured beyond the newly-imposed limit of six nautical miles.

There have also been widespread reports of the Israeli navy opening fire at fishermen within those limits.

In October, the head of the Gaza fishermen syndicate accused Israel of constantly violating the terms of the agreement.

“Since signing the truce, the Israeli army has violated (the agreement) many times, arresting fishermen and destroying a giant fishing boat, in addition to firing at fishermen on a daily basis,” he said.

There are an estimated 4,000 fishermen in Gaza. According to a 2011 report by the International Committee of the Red Cross, 90 percent are poor, a 40 percent increase from 2008. This change is believed to be a direct result of Israeli limits on the fishing industry.

The eight-year Israeli blockade has severely crippled Gaza’s economy and contributed to the frequent humanitarian crises and hardship for Gaza residents.