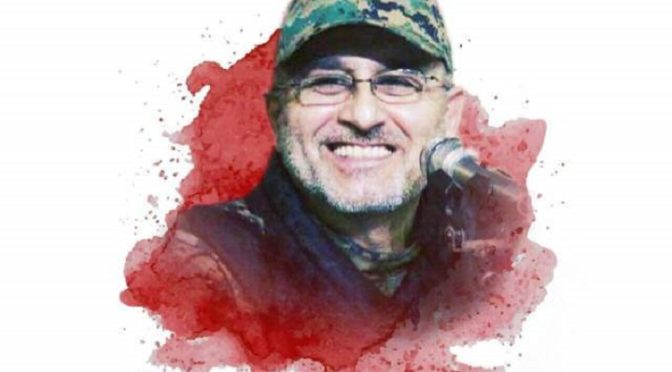 This is BLOOD-BOILING. According to the lying, thieving, pathetic, genocidal ‘Israeli’ enemy, Hajj Moustafa “Sayyed Zulfiqar” Badreddine (R.A.), the legendary Hizbullah commander martyred last year in Syria, was killed by Hizbullah itself. This filth, spewed by Gadi Eizenkot, the chief of the defeated Zionist occupation army and executor of the “Dahiyeh Doctrine” that leveled Beirut’s southern suburbs with cluster bombs in the 2006 July War, is making its rounds across the ‘Israeli’ press as well as the Zionist-controlled MSM. Eizenkot clownishly babbled on that Hizbullah assassinated its beloved military strategist because of an “internal crisis” within the Party and “tensions” between the Party and Iran. You know, It’s putrescent propaganda like this that serves as a perfect reminder why Messiah Jesus (A.S.) said the following to (and of) the Jews: “You belong to your father, the devil, and you want to carry out your father’s desires. He was a murderer from the beginning, not holding to the truth, for there is no truth in him. When he lies, he speaks his native language, for he is a liar and the father of lies.”

Above and beyond the sheer disregard for respect, honor and etiquette in warfare–of which the Jews have zero on any front–such hasbara has no purpose other than the ‘Israelis’ being the malicious sons and grandsons of parasites that they are. Firstly, Sayyed Zulfiqar was NOT, let’s repeat, NOT killed by the Lebanese Islamic Resistance but the Takfiri terrorists of Jabhat al-Nusra, who are armed by ‘Israel’, provided intelligence by ‘Israel’, politically backed by ‘Israel’ and treated in state-of-the-art military hospitals by ‘Israel’, thus making the usurping Zionist entity responsible for his murder. Secondly, the very assertion that Badreddine was killed by Hizbullah is both ridiculous and utterly obscene. He was not only a founding member of Hizbullah and the architect of much of Hizbullah’s strategy both in Syria and the direct battle against the ‘Israeli’ enemy, he was among the closest friends of Sayyed Hassan Nasrallah. Thirdly, there is no “internal crisis” inside Hizbullah, it is stronger than ever before and it knows ***exactly*** what it is fighting for – the future of our entire region, one without Takfirism or Zionism. Fourthly, there is no “tension” between the Party and Iran either, the two have never been closer in all aspects.

And fifthly, as if it even needed to be said, Hizbullah doesn’t kill its own members. Rather, it schools them from their youth, nurtures them, guides them, raises them to the highest heights and gives them the glorious opportunity to achieve victory in the face of the most monolithic and cunning conspiracy that humanity has ever known. And even those who fall off the Party’s path, like the disgraceful Subhi Tufayli or the low-level Hizbullah fighter caught spying for ‘Israel’ in December ’14, are dealt with humanely according to the Mouqawamah’s Islamic principles. You know who does kill its own soldiers and operatives though? Yeah… You guessed it. ‘Israel’. IOF has an ominous protocol called the Hannibal Directive which it invokes whenever one of its occupation soldiers gets captured by a resistance organization. The aim of this secret ordinance, one truly rooted in atypical Jewish cowardice, is to stave off prisoner exchanges as well as to prevent any possible intelligence from being divulged. Lest we forget Robert Maxwell, the British-Jewish superspy who had performed numerous “mitzvot” for the Jewish “state” during his lifetime but was ultimately murdered on his yacht when he fell out of favor with his Mossad superiors. And most famous of all, the lifelong Jewish-Zionist terrorist Yitzhak Rabin, assassinated by his buddies in Shin Bet so they could sacrifice him on World Jewry’s altar of fake “peace” and continue onward with the “Greater Israel” project uninterrupted.

While the horrific and baseless accusations about Hajj Moustafa’s death could (and should) be chalked up to a classical case of Jewish projectionism, there is also something more strategic to it. Indeed, ‘Israel’ gets more and more see-through by the day, JUST LIKE the spider’s web Sayyed Hassan Nasrallah described it as nearly 17 years ago in the Southern Lebanese town of Bint Jbeil after declaring liberation. The cancerous entity is releasing these lies at this particular juncture because it is trying to change the discussion about its failures in Syrian airspace and its growing apprehension about the increasingly tense situation in the occupied Golan Heights. Last Friday, ‘Israeli’ warplanes attacked the Syrian Arab Army in newly freed Palmyra but Syria responded via its air defense systems, shooting down one of the invading jets. Not even 48 hours later, an ‘Israeli’ Sky Rider drone violated Syrian sovereignty yet again, this time in Quneitra, but Hizbullah blasted the drone out of the sky. And amid all this, ‘Israelis’ across the board were (and remain) biting their dirty fingernails and rocking back and forth in a fetal position over Iraqi Islamic Resistance group Harakat Hizbullah al-Nujaba officially forming the Golan Liberation Brigade. Since it can no longer attack Syria without risking losses and since it is now looking into a not-too-distant future where the Golan Heights have returned to Syria, ‘Israel’ is lashing out with deception because deception is how it wages war.

But the ‘Israelis’ are so hysterical right now that the glaring irony is most likely lost on them. Disseminating fallacies about Hajj Moustafa Badreddine as they lose their grip on the Golan is actually a reinforcement of Badreddine’s prowess, legacy and status as well as Hizbullah’s magnificent might. Even in death, Sayyed Zulfiqar occupies the minds of the Zionist usurpers like they once illegally occupied his homeland. Even in death, Sayyed Zulfiqar enrages the enemy. Contrary to propaganda that you’d find in Western-GCC media outlets, Badreddine was not only the commanding Jihadi officer of Hizbullah’s “Syria apparatus”. Like Samir Quntar (R.A.), Hajj Ali “Alaa Bosnia” Fayyad (R.A.) Hajj Hatem Hamada (R.A.) and a handful of other martyred founding Hizbullah commanders, Sayyed Zulfiqar’s central mission, one that he helped design alongside Hajj Imad Mughniyeh (R.A.), was building up a Mouqawamist infrastructure in the Golan Heights. Spilling his blood only gave more nourishment to the seeds he planted. No armor compares to truth and when bullets of untruth are fired at it, they don’t just bounce off but disintegrate into dust. So forge your lies, o’ Yahoudlings! Moustafa Badreddine is too blessed to be affected by your devilry! And soon, his name will ring out like the morning tune of a songbird in a 100% Zionist-free Golan Heights after his Syrian, Lebanese and Iraqi sons deliver the land from Halakhic-Talmudic peril.