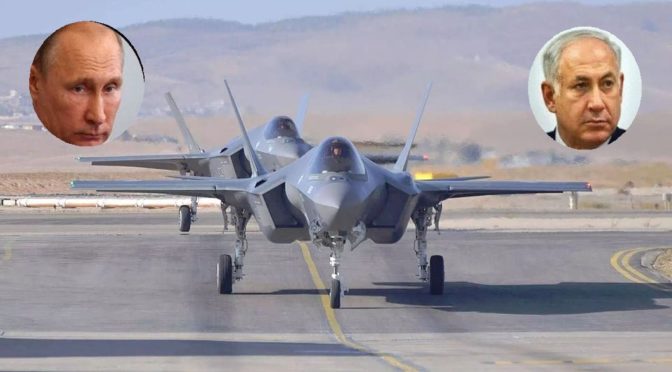 Panicking, they mobilized, and in a throwback to the 1956 Tripartite Aggression against Egypt, they enlisted the help of an old ally: the French ZOG. France launched missiles from the Mediterranean to throw off Syria-Russian radar trajectories while the ‘Israelis’ went forward with a huge aerial assault, bombing Lattakia, Tartous, Hama and Homs all at once. As of now, at least two Syrian soldiers have been martyred and about a dozen others have been wounded. The most copious number of casualties however came from the Russian side. An Ilyushin IL-20 electronic surveillance plane was downed in the carnage and 15 Russian servicemen were murdered. ‘Israel’ decided to play a game of Yahoudling Roulette and used stealth tech to shadow the Russian vessel so when Syrian air defenses responded, they’d hit the Ilyushin IL-20 , not the ‘Israeli’ occupation air force’s murder-plane. And that’s exactly what happened.

The Russian military, which laid out the anatomy of the aggression in full, was fuming, “We consider these provocative actions by ‘Israel’ as hostile. Fifteen Russian military service members have died because of the irresponsible actions of the ‘Israeli’ military.” Russian Defense Minister Sergei Shoigu phoned genocidal war criminal Avigdor Lieberman and is said to have screamed his head off at the ‘Israeli’ War Minister. He further revealed that ‘Israel’ called in its attack plans on the Russian-‘Israeli’ deconfliction line JUST ONE MINUTE before the attack–another blood-soaked confirmation that it wasn’t an “accident” as the artificial “Tel Aviv” regime is claiming but a deliberate act of war. Shoigu also told Lieberman that Russia “reserves the right to use further countermeasures” in response to the slaughter of its men. That Lieberman has refrained from speaking on it and IOF itself is yet to apologize reveals the level of culpability at the highest levels of the Zionist occupation’s “defense” establishment.

Russian President Vladimir Putin’s comments on the matter were much more… Measured. His detractors, in their usual hysterical cacophonies, called him “soft”. As always with Putin though, one must read between the lines. Ever the defuser, ever the peace-maker, he called what took place a “chain of tragic and chance circumstances”. But later on, he made it clear that it was a “serious incident” that “requires a response”. And then said in no uncertain terms, “As for retaliatory measures, they will be aimed first and foremost at further ensuring the safety of our military personnel and facilities in Syria. And these will be steps that everyone will notice.” This could mean Russia finally stepping into the throes of the Resistance-Axis-‘Israeli’ battle and 86ing ‘Israeli’ aerial movements in Syria. It could mean heavier and more advanced weapons not just to the Syrian state but Iran too. Not that the Islamic Republic needs it of course, as its weapons industry is robust and brilliant, but extra hardware never hurts. We shall soon see.

The Halakhic-Talmudic entity is obviously acting out of desperation and Kabbalistic irrationality. Thus, why would Vladimir Putin, who is trying to END the war on Syria, give the ‘Israelis’ an excuse to EXPAND the war on Syria in a maddening scenario that will lead to more tragedies, more destruction and more death? It’s just not in his ideological DNA. Art of War 101: Win without fighting. Putin gets that–more so than ever with Syria on the verge of total liberation from Takfiri terrorism. He doesn’t need to subscribe to some cliched concept of machismo, puff out his chest and behave like a brute just to satisfy the bloodlust of armchair geopolitical “big shots” who don’t know their feet from their earlobes, let alone how to confront the Dajjalic-Judaic NWO. The man’s trying to avert a nuclear catastrophe–and with ‘Israel’ and its Samson Option in the mix, that’s not hyperbole. Granted, Russia has every right to blast ‘Israel’ to Jahannam for this atrocity and truth be told, the payback’s truly been coming ever since the Zionists played such an odious role in the Russian-Georgian War. But the ‘Israelis’ executed a warmongering trick… And Russia found calm in the heat of the moment, managing not to fall for it. No need to blow the impending triumph now, so it once again boils down to what Ayatollah Sayyed Ali Khamenei calls Strategic Patience–derived from Imam Hassan (A.S.)

Indeed, the aim of ‘Israel’ here was as blatant as anti-Gentile racism in the Old Testament and the Talmud: The Zio-Tumor planned for Russia to respond on the spot to the aggression, taking out ‘Israeli’ aircraft and then drawing the US into a wider war… Or… In an even more cataclysmic calculation, Russia being enveloped in the chaos, mistakenly hitting France and triggering a full-blown NATO retaliation. Either way, the Jews’ designs were to bring about a third world war, rendering the US, Russia and the Resistance Axis destroyed or bled out beyond repair, with nobody but ‘Israel’ left to pick up the pieces and claim global kingship. Lunatic behavior you say? Nutty Netty finally throwing out the Goy baby blood with the matzoh? You wouldn’t be entirely wrong. But you wouldn’t be entirely right either. For provocations of this nature–those that would lead to a nuclear conflict between two superpowers–are a time-tested Zionist tradition.

In 1954, Egyptian-Jewish Mossad agents carried out Operation Susannah aka the Lavon Affair, planting bombs in US targets to be blamed on the “Muslim” Brotherhood in hopes of getting Washington to attack Egypt and by extension, the Soviet Union. During the Naksa of 1967, ‘Israeli’ warplanes massacred the crew of the USS Liberty with the goal of blaming Egypt and starting WW3 between–you guessed it–the US and the Soviet Union. We were only minutes away from a US nuclear strike on Cairo when the Americans realized it was an ‘Israeli’ attack. Then in the Tishreen War, Golda Meir openly pondered about dropping a nuke on Damascus, which wouldn’t have killed Syrians alone but Soviet military advisors, yet again setting the stage for Soviet-American conflict. The reason for the monstrous Gulf War was ‘Israeli’ terrorist Yitzhak Shamir threatening to drop an atom bomb on Baghdad if the US didn’t rein in Saddam Hussein after the maneuver against Kuwait. And how many times have you heard Zionists outright say they wanna see mushroom clouds over Tehran? From vile millennial commentator Jacob Wohl to neocon wacko John Bolton, Hebrew University orientalist Vladimir Mesamed to casino billionaire Sheldon Adelson. This type of psychopathy is the lifeblood of World Zionism.

Ultimately, while Putin’s coolness has temporarily staved off an escalation, what should be elucidated for him and the entire Russian establishment now more than ever is that ‘Israel’ has no respect for Russia’s people inside Syria or anywhere else for that matter. “Deconfliction” and “partnership” are but illusions that ‘Israel’ flexes out of convenience and ignores when inconvenient. According to the Jewish supremacist thinking that guides the illegitimate ‘Israeli’ regime, a Gentile is a Gentile. Period. And any Gentile helping out the enemies of “Eretz Yisrael” will be a dead Gentile. Especially when they’re Orthodox Christian Russians assisting a unified bloc of Husseini Muslims and fighting as one unit to defeat Zio-Imperialism. Zion’s next move depends entirely on Russia’s retaliation. One thing’s for sure: This was as brazen as brazen gets and “chosenite” arrogance aside, it is not a card that can be played again. In the mean time, we recite Al-Fatiha for the souls of the SAA and Ilyushin IL-20 Lattakia martyrs and pray that the Idlib demilitarization agreement holds. Syria and its allies have all suffered enough.

7 thoughts on “‘Israel’ Takes Down Russian Aircraft In Huge Attack On Syria To Derail Peace In Idlib, But Putin Doesn’t Blink”