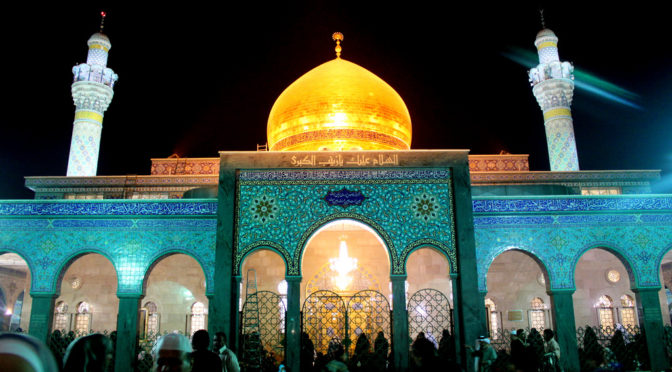 ‘Israel’ actively finds ways to increase its filth. I mean… Just when you thought it had located the bottom of the depravity-abyss, it demonically innovates to keep sinking lower and lower to depths even more depraved than previously imagined. It wasn’t enough that the bastards of Zion bombed Damascus on Christmas a couple weeks ago. While the Syrian Arab Army was hit in the illegal air raid, cowardly launched from Lebanon to avoid Syrian and Russian air defenses, it was perplexing to the overwhelming majority of analysts as there wasn’t any militarily strategic reasoning behind it. That’s because it wasn’t military but ideological. ‘Israel’ bombed Damascus as millions of innocents were celebrating Christmas for the first time without Takfiri terrorism in their city in 7 years because it hates Christ (A.S.) That’s it. Opposition to the Messiahship of Jesus (A.S.) is foundational to Judaic-Zionist thought.

And the Jewish terrorist leadership all the way up to Netanyahu, furious about their humiliation in Syria, thought what better way to inflict horror on Syrians and stick it to the guy who fought the Zionists’ predecessors, the Pharisees, 2,000 years ago on top of it, than raining bombs on their parade. Hatred of Christ (A.S.) factors into multiple elements of Jewish everyday life, from religious praxis to Hollywood. It’s the central motivation behind the Jewish domination of the pornography industry also. Well. Now the Zionists have gone ahead and bombed Damascus yet again and on yet another high, holy day, only this time it’s for Muslims: The birthday of Sayyeda Zaynab al-Kubra (A.S.), revered by massive swathes of the Ummah, especially Shi’a, and there were a large number of pilgrims at her shrine in the Syrian capital celebrating and praying right around the time ‘Israel’ carried out its latest aggression.

Once more, geopolitical commentators scratched their heads because while yet another contingent of Syrian Arab Army soldiers were targeted, and no doubt the ‘Israelis’ are foaming at their unkempt mouths that US occupation forces have started the withdrawal from Syrian soil, a lone air strike, launched again from Lebanese skies through a violation of Lebanon’s sovereignty, isn’t going to turn the tide of the lost war. Therefore, the “strategic value” of the operation is ultimately extraneous. And repetitiously, we acknowledge that this is because there wasn’t any real military goal in mind. ‘Israel’ bombed Damascus yesterday because it hates Islam, the Prophet (S.A.W.W.) of Islam and the First Family of Islam (A.S.) completely and viscerally. ‘Israel’ wanted to hurt Muslims while they were commemorating the entry of the Mother of Defiance, Zaynab al-Kamila (A.S.), into this world. That’s it. Opposition to the Prophethood of Muhammad (S.A.W.W.) and the Imamat of his Pure Household (A.S.) are foundational to Judaic-Zionist thought, particularly in the post-9/11 world in which the lifeblood of GWOT (the global war on terror) is Zioganda against Islam.

To drive the point home further, and to reassure that none of this is being driven by idle talk, allow us to note beliefs and facts of history intrinsic to the Jews’ anti-Islamic disdain. It is the position of Judaism that Isma3il (A.S.), the father of we Arabs and thus, the father of Muhammad al-Moustafa (S.A.W.W.), was a “wild donkey of a man”, wicked in his soul, sexually deviant and undeserving of any prophetic station as well as Ibrahim’s (A.S.) love. Zayd Ibn Amr (R.A.), a Hanif who upheld monotheism just before the advent of the Holy Prophet (S.A.W.W.), was viciously rebuked by the Jews and though his murder remains a mystery to this day, the Jews remain one of the top suspects either directly or indirectly. Rasoulallah (S.A.W.W.) himself was opposed by the Jews every step of the way via political, financial and military means and was ultimately poisoned to death by one, Zaynab bint al-Harith (L.A.) Imam Ali (A.S.), the vanquisher of Yahoudi Khaybar, was murdered by the Jew Ibn Muljim (L.A.) with a poisoned blade.

The Jews were the allies of Mouawiyah (L.A.) against Imam Hassan (A.S.) and Yazid (L.A.) against Imam Hussein (A.S.) and Lady Zaynab (A.S.) Arguably the greatest transmitter of false ahadith, and ipso facto, one of the most damaging personalities to slither their way into the Ummah, was Ka’b al-Ahbar (L.A.)… A Jew. Maimonides, the most revered rabbinical personality in the last 1,000 years of Jewish history and perhaps even ever, deemed Muhammad (S.A.W.W.) a “madman” and wrote in his “Epistle to Yemen” that the greatest and most dangerous threat to Judaism was Islam. This has been echoed by his contemporaries, students and admirers throughout the ages.

And most despicably, in section 282a of the third book of the Kabbalah’s Zohar, one of Judaism’s most important texts, it is written that Muhammad (S.A.W.W.) along with Jesus Christ (A.S.) are “dead dogs” surrounded by worms and vermin and are having their flesh feasted upon in perpetuity. From soup to nuts, the Jewish stance on Arabs and Islam, from their own transmissions, is one of violence. No wonder why you see “price tag” vandalism scribbled despicably on homes and mosques throughout occupied Palestine with the phrase “Muhammad is dead”; why you see Nabi Muhammad (S.A.W.W.) mocked and degraded on platforms owned by Jews every time you turn on your laptop or your TV. That’s not Zionism. It’s not colonialism. It’s Judaism. And needless to say, much to the chagrin of Jewish globe-holders and their minions everywhere, Muhammad (S.A.W.W.), as the Shahid of Shahids, isn’t dead at all but extraordinarily alive in more ways than one, guiding the forces of Mouqawamah against Organized Jewry

As if the Nakba, the Naksa, Sabra and Shatilah, Qana (x2), 9/11, the destructions of Afghanistan, Iraq, Libya and Syria, the international organ trafficking trade and many, MANY other crimes weren’t enough to hate ‘Israel’, it’s now outwardly desecrating the sacred days of our most sacred figures for no other discernible purpose than it’s religiously embedded in its Judaic aura to do so. If there’s a silver lining to this, it’s that we should treat this as a wake-up call for the whole of the Islamicate. We are fighting a spiritual war and our enemy not only has a lack of respect for what we consider sacrosanct, it possesses an almost-manic hatred for it. To push back against this enemy’s agenda, we need all hands on deck and must, as the children of Christ (A.S.) and Muhammad (S.A.W.W.), utilize our religion to fight back.

The slanderers of each of these figures are only able to sustain their miserable, noxious, shaytanic existences because we — i.e. Muslims and Christians — aren’t adhering to our respective schools of thought and are going at each other instead. And if we see that we have so many more commonalities than differences, we’ll also come to grips with the fact that one of those commonalities is our enemy. The Mahdi (A.S.) and the Messiah (A.S.) are returning to fight for justice TOGETHER… Against… The Halakhic-Talmudic Dajjal, both the figure and the system. To use a Qur’anic idiom, there’s a sign in that for those who reflect. So in the name of ‘Isa al-Masih (A.S.) and Lady Zaynab al-Kubra (A.S.), let’s reflect for sure. And do better. Much better. And also in their names, may Damascus, as well as all of Syria, know peace from the malignant growth called ‘Israel’ just as it now knows peace from Takfirism, the Zio-Tumor’s proxy. Victory to Christ (A.S.) Victory to Ahlul Bayt (A.S.) Infinite curses upon Shlomo.

3 thoughts on “‘Israel’ Hit Damascus On Christmas Out Of Christ-Hatred, Now It Has Bombed Damascus On Zaynab’s (A.S.) Birthday Out Of Islam-Hatred”