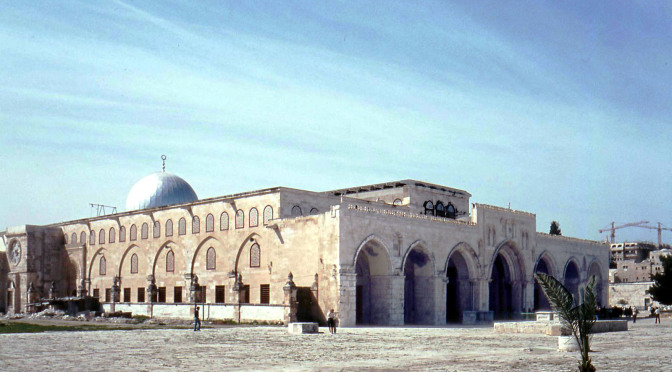 (EDITOR’S NOTE: Several months ago, Hizbullah Secretary-General Sayyed Hassan Nasrallah explicitly warned that the Jews would use ISIS’s continuing demolitions of mosques, Husseiniyas, churches and shrines in Iraq and Syria as an excuse — as well as a precedent — to carry out grave aggressions against Sanctified Al-Aqsa in occupied Al-Quds. Well, as usual, the Sayyed was right on the money. The closure of Islam’s third holiest site isn’t just a despicable Zionist crime against the indigenous Palestinian people… it’s an attack on all Muslims. And nothing is going to deter these Jewish supremacist fanatics from engaging in such actions again and again  and again, except armed resistance in the West-Bank-Al-Quds region. The Islamic Republic of Iran, recognizing this to be the sole logical way of disrupting the illegitimate Zionist’s designs on Palestine in general, says it has already started the process of providing the Palestinian Resistance in the aforementioned region with arms. Insha’ALLAH this accelerates and deepens so operations like the one that targeted the deranged terrorist Yehuda Glick become a regularity, as “Israel” understands no language but force. ~ Jonathan Azaziah)

At least 20 Palestinians were injured in the clashes, as Israeli forces used stun grenades, rubber bullets and teargas in the East Jerusalem neighborhood of Silwan to disperse stone-throwing Palestinian youths, according to an Anadolu news agency correspondent.

Israeli Occupation Forces on Thursday closed the al-Aqsa mosque compound to all visitors after an overnight shooting incident in which a man on a motorbike tried to gun down an Israeli hardliner.

“This dangerous Israeli escalation is a declaration of war on the Palestinian people and its sacred places and on the Arab and Islamic nation,” Palestinian Authority President Mahmoud Abbas spokesman Nabil Abu Rudeina quoted him as saying on Thursday.

“We hold the Israeli government responsible for this dangerous escalation in Jerusalem that has reached its peak through the closure of the al-Aqsa mosque this morning,” he told AFP.

“The state of Palestine will take all legal measures to hold Israel accountable and to stop these ongoing attacks,” he added.

Earlier on Thursday, Israeli forces killed a Palestinian man suspected of the shooting attack on the Israeli hardliner, a spokesman said.

“The Palestinian, who was the main suspect in the Wednesday night attack, was eliminated at his home in Jerusalem’s Abu Tor neighborhood by special police forces,” police spokesman Micky Rosenfeld told AFP.

Abu Tor straddles the seam line between west Jerusalem and the occupied eastern sector, which was occupied by Israel during the 1967 Six Day War.

The suspect’s death took place just hours after a gunman on a motorcycle had opened fire at a right-wing Zionist Rabbi called Yehuda Glick at a rally in Jerusalem, leaving him critically wounded.

Glick was reportedly shot in his upper body at “close range” at an event outside the Menachem Begin Heritage Center in Jerusalem, where a number of Israeli members of Knesset and right-wing activists were in attendance, Israeli news site Ynet said.

Palestinian resistance faction Hamas on Thursday hailed the shooting of the far-right rabbi, who is notorious for leading groups of Zionists to force their way into the al-Aqsa compound on multiple occasions.

“I have ordered a significant increase in forces as well as in means (available to them) so we can both ensure security in Jerusalem and also maintain the status quo in the holy places,” he said in a statement released by his office.

The attack was reported after a conference focused on the reconstruction of a Jewish temple on top of the al-Aqsa mosque was concluded at the center, with top right-wing Zionist officials and activists in attendance.

The incident comes amid increasing tension in Jerusalem over an expected Knesset vote to potentially divide the al-Aqsa mosque compound — the third-holiest site in Islam — between Muslims and Jews, or else restrict Muslim worship at the site.

The Israeli army radio announced early October that the ministry of tourism was working on a plan to allow Jews to enter the al-Aqsa compound through the Cotton Merchants Gate, in addition to the Moroccan Gate which is already used as an entrance for non-Muslims.

Although mainstream Jewish leaders consider it forbidden for Jews to enter the area, right-wing nationalist activists have increasingly called for Jewish prayer to be allowed on the site.

Since Israel occupied East Jerusalem in 1967, an agreement with Jordan has maintained that Jewish prayer be allowed at the Western Wall plaza — built on the site of a Palestinian neighborhood of 800 that was destroyed immediately following the conquest — but not inside the al-Aqsa mosque compound itself.

Yehuda Glick is an American-born Israeli and the chairman of the Temple Mount Heritage Fund, a Zionist organization focused on “strengthening the relationship between Israel and the Temple Mount.”

Critics charge that the Fund actually leads Jewish tours to the site with the intention of leading Jewish prayer there – currently banned under Israeli agreements – and encouraging Jews to destroy the Al-Aqsa mosque and build a Jewish temple there.

He has been previously banned by Israeli authorities from entering the compound due to provocations while on the site.

Israeli authorities have imposed restrictions on Palestinians seeking to enter the al-Aqsa mosque compound, denying Muslim men under 40 access to the holy site while facilitating the entry of Zionist settlers of all ages.

“The Palestinian leadership will be taking the necessary legal measures, at the international level, regarding the aggression of settlers on the al-Aqsa mosque,” Abbas said in a speech to the Revolutionary Council of his Fatah party.

“We will not allow settlers to attack the mosque,” he added, referring to the entire compound, which is the third holiest site in Islam.

Jordan on Thursday accused Israel of “state terrorism” after it closed al-Aqsa.

He urged the international community to help Jordan put pressure on Israel “to raise the terrorist blockade” imposed on the compound.

“This is a dangerous escalation by the authorities of the occupation and state terrorism that we can neither accept nor keep silent about,” Daoud said.

The resistance group called on “directing all efforts to protect al-Aqsa and the Islamic and Christian holy sites.”