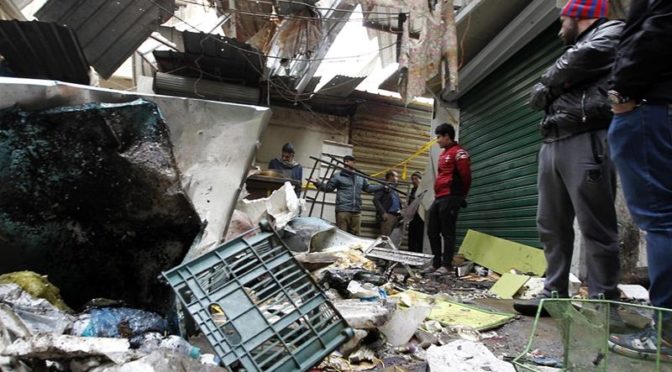 Even on New Year’s Eve, Iraq has to tear at my heart strings… Because of course the Takfiri terrorist menace of ISIS had to carry out just one more massacre before 2016 came to a close. As Iraqis flocked to the busy Al-Sinak market in central Baghdad, gathering up food and gifts for year-end celebrations, two Daesh suicide bombers made their way into the huge crowds and then detonated their explosives-laden vests. At least 28 men, women and children, all Shi’a, were martyred and over 54 others were wounded in the blasts. Death toll, as usual, is expected to rise as city police and medics pull more bodies out of the rubble. There are so many, so, SO many, to direct our anger at: The killers themselves, for being so foolish to be tricked by the hateful, murderous, cultish doctrine of Wahhabism; the financiers of the killers in Riyadh, Doha and Kuwait City, for keeping the petro-cash flowing into terrorist coffers whilst claiming they stand against the very terror they fund; the masters of the killers in Washington, London and “Tel Aviv”, for keeping the P2OG and Gladio/B programs alive and well to keep Iraq in chaos; and the corrupt persons who should be preventing the killers from ever perpetrating such crimes, i.e. the Iraqi government, for failing time and time again to provide the people of the Iraqi capital with real security.

The unspeakable massacre in Al-Sinak closes out another bloody year in Iraq. Last month, over 100 pilgrims from Iraq itself, Iran, Bahrain and Afghanistan were slaughtered by Mossad-backed ISIS mercenaries in Hilla as they wrapped up their activities for Arbaeen. And on July 3rd, the biggest bombing in Iraqi history occurred in the Karrada district of Baghdad, an attack that left over 320 innocents martyred. It’s sometimes difficult beyond expression to think Iraq is ever going to recover; that we’re going to know anything outside of American-led aggression, Zionist-led subversion and GCC-funded terrorism, not to mention all the poverty, inept governance and corruption that goes along with it. But then I look upon the light-filled faces of Sayyed Hashem al-Haidari, Sheikh Akram al-Kaabi, Hadi al-Ameri, Abou Mahdi al-Mouhandis, Qais al-Khazali and Ayyoub Faleh al-Rubaie (Abou Azrael), and the hope returns. We have a long way to go undoubtedly, but through the strength of these heroes and the sacrifices of the dauntless Iraqi Resistance, we will be guided into an era without our enemies’ malevolence at every turn. Rest in power to our glorious martyrs. And may 2017 see at least some semblance of peace and stability return to Iraq.