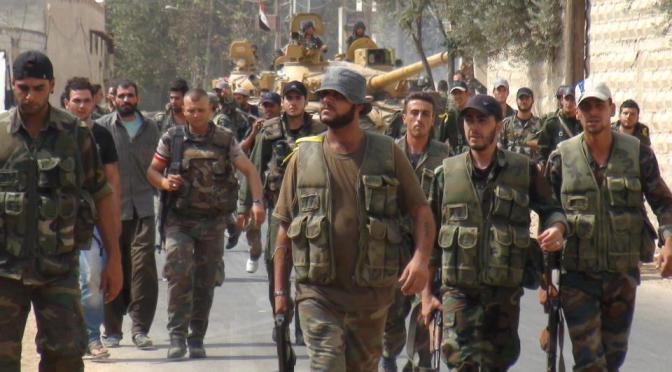 After 5 days of heavy firefights at the Al-Sha’ar Gas Fields, the Syrian Arab Army (SAA) and National Defense Forces (NDF) have countered the Islamic State of Iraq and Al-Sham’s (ISIS) offensive in east Homs, recapturing lost territory and killing scores of militants during the fierce clashes. Earlier today, the SAA recaptured the Hayyan Gas Fields, securing the area and forcing the ISIS militants to retreat further north.

Following the success at Hayyan Gas Fields, the SAA recaptured Points 30 and 36 in southwest Jabal Al-Sha’ar; this forced ISIS to concentrate fighters near the Al-Sha’ar Gas Fields, halting their attack on the Teefour Airbase. According to a military source, there have been no attacks on Teefour Airbase today and no terrorist attacks near Homs-Palmyra Road. The source also added that over 30 ISIS militants were killed in the retaking of Points 30 and 36. Despite the success at Hayyan, and Points 30 and 36, the SAA is still on the outskirts of the Al-Sha’ar Gas Fields and they have yet to breakthrough ISIS defenses.

The death toll for the SAA has reached 27 soldiers and 31 NDF fighters at Jabal Al-Sha’ar; these totals have been confirmed. According to a military source, ISIS has suffered heavy casualties, but the total has not been confirmed yet. Among the NDF casualties was the commander of their forces, Fadi ‘Isma’el from Jableh, Latakia – he was killed yesterday during clashes outside of Teefour Airbase.

The SAA carried out numerous operations at Al-Wa’er in the Homs Governorate, destroying multiple Jabhat Al-Nusra hideouts and confiscating a large cache of weapons and ammunition in the process. Over 50 militants from Jabhat Al-Nusra have been killed over the last 3 days, including 5 fighters from the Al-Firas family of Ar-Rastan in Homs.