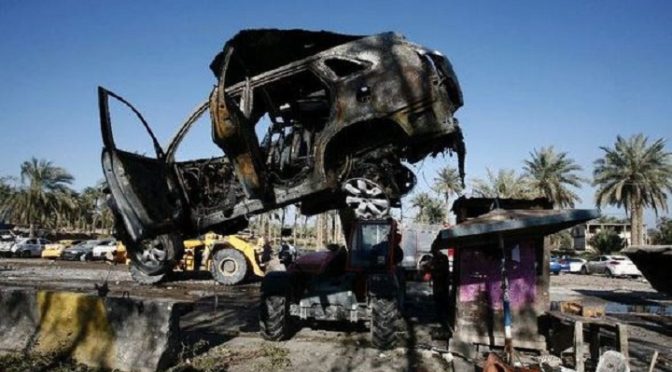 The perversions inflicted on Iraq by Daesh never cease to horrify, do they? Earlier on today, suicide bombers from the Zionist-US-GCC-created Takfiri terrorist group rammed ambulances– vehicles normally used to save lives–into the city entrance of Tikrit as well as a car park in the holy city of Samarra, slaughtering at least 31 innocents and wounding dozens more. The martyrs, including ten Iranians, were Shi’a pilgrims on their way to the shrine of the eleventh Shi’a Imam, Hassan al-Askari (A.S.), as preparations are underway for Arbaeen, the ceremony held to mark the end of the 40-day mourning period over the martyrdom of Imam Hussein (A.S.), not to mention the largest religious gathering in the world. Even as ISIS is being attacked from every side in Mosul, with the Iraqi army advancing on the eastern and western flanks of Iraq’s second city and the Iraqi Popular Mobilization Units (PMU) clearing out the terrorist poison on the outskirts and in the strategic town of Tal Afar, the MossadDaeshis still manage to find time to torment civilians outside of the “conflict zone”–like their ‘Israeli’ masters across every inch of Palestine and their Saudi financiers in Yemen, it’s just what they’re programmed to do.

But it is not only ISIS killing Iraqis in the midst of the battle for Mosul but the American regime as well. US air strikes murdered an entire family in the village of Fadhiliya just a few days ago and according to data compiled by the Russian Defense Ministry, the Washington ZOG’s jets are dropping bombs on the densely populated city every eight minutes–not on the positions of Daesh, but the resting places of men, women, children and elderly. Since the Mosul operation started, the US occupation has bombed schools, funerals, markets and residential homes, killing at least 100 civilians and badly injuring hundreds more. It’s like the ’03 “shock and awe” campaign all over again. The aim of Obama, Kerry and company is blatant: Disseminate fitnah so even after the terrorism spawned by Washington, “Tel Aviv” and Riyadh is driven out of Iraq, civilians will lash out at one another.

Here’s a newsflash though, you shaytanic maniacs: Iraqis ain’t falling for your okey doke. Just check any of the video footage shared by the media offices of the PMU and the Iraqi Defense Ministry. Civilians are welcoming the Iraqi moujahideen and the Iraqi army with open arms, hugs, kisses, candy and cheers and they’re fully cognizant of the US scheme which is afoot. After more than half a century of American meddling in our affairs, we know who’s a proxy, i.e. the lesser danger, and who’s the master, i.e. the greater danger. ISIS first, American occupation forces next if they don’t bounce. This has been the consistent message of Harakat Hizbullah al-Nujaba, Kata’ib Hizbullah and other Iraqi Resistance groups. Iraqi blood isn’t even the least bit cheap and all the blood of our people that the Washington ZOG along with its tools have spilled will not go unaccounted for. Basra, Najaf, Kufa, Karbala and Fallujah, the graveyards of Imperialist soldiers in the pay of World Zionism, are the proof that vengeance belongs to the defenders of Bilad al-Rafidayn. May ALLAH (SWT) grant the most glorious stations of Jannah to our Shouhada.