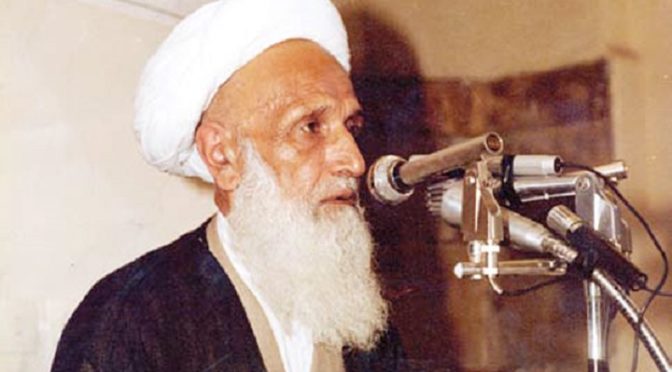 It is said that the blood of Abou Zar al-Ghiffari (R.A.) flowed through his ancestors who came to Kermanshah–where he made his home–from Bilad al-Sham’s Jabal Amel, the land that wrote the book on mouqawamah and mumana’a. He was one of the first–if not **THE** first–to call for Imam Khomeini (R.A.) to be made Grand Marja’ in the wake of Ayatollah Sayyed Hossein Borujerdi’s death. Esfahani always said that nobody could be compared to Khomeini (R.A.) and the Imam referred to Esfahani as the “base” and the “spine” of the revolutionary movement in Kermanshah.

For nearly six decades indeed, Esfahani was one of Imam Khomeini’s (R.A.) closest friends and confidants, which is why the Imam made him leader of Jummah prayers in Kermanshah and mourned him deeply and painfully when he was assassinated. Sayyed Ruhollah (R.A.) said he had “pure devotion” to him as a brother. He called him the “dearest” of martyrs and “blessed” and stated that he admired “his patience, his calm, his peaceful and reassuring spirit, his vast knowledge and ocean of good deeds.” He stated further, “There is no bigger personality on the front of defending the truth and shaping the youthful souls who long for combat.”

Ayatollah Ata’ollah, on top of being a scientific and analytical mind sharper than all the swords in all the armories in all the countries of the world, was fiercely loyal. When a single newspaper article was published against the Islamic Revolution–by one of Mossad’s anti-Khomeiniist assets, of course–Esfahani mobilized tens of thousands of Muslims that ultimately became hundreds of thousands in a demonstration that he led in support of the Shah’s ouster and in militant condemnation of the US, ‘Israel’, Saudi Arabia and every enemy of Islam and Ahlul Bayt (A.S.) Not just Shi’a either but Sunnis too. The Ayatollah was as strong on promoting and fomenting Islamic unity as he was in promulgating the haqq of the Revolution.

He used to give long lectures about each one of the 12 Imams (A.S.) and insist that if they were with us today in the physical, they’d be the first to join Imam Khomeini’s (R.A.) struggle. In fact, they would have been the ones who STARTED the Islamic Revolution and it would’ve been Sayyed Ruhollah (R.A.) and himself following them! Esfahani was impassioned about Palestine, never missing a beat in instructing all who would listen that liberating Al-Quds and ending the Judaic occupation of all Palestinian lands were religious duties as imperative as Sawm and Zakat. He was also on the front lines during the Imposed War launched by the despot Saddam Hussein, spearheading Jummah prayers and ensuring that all soldiers stayed on point with their Salat despite the US-UK-‘Israeli’-Soviet-Saudi-backed siege.

It was for all these attributes and achievements, not to mention his influential status and popularity, that the Jewish-Zionist Imperium wanted the Kermanshah Light-Burst gone. Being that Ayatollah Ashrafi was so close to Khomeini (R.A.), Shlomo and co. thought his removal from the fight would deliver a crippling blow to the Islamic Revolution. So on this day in 1982, knowing that Esfahani was a humble man who loved the people and routinely met his students, embracing them and talking to them one on one even after an extended khutbah, the ‘Israeli’-run MEK sent a suicide bomber armed with a grenade to greet him. Upon their embrace, the terrorist pulled the pin, killing himself, the Ayatollah and several students while wounding over a dozen more. To this very moment, the MEK, being the Zio-Imperialist swine and slime that they are, celebrate Esfahani’s killing and openly state that they only wish they could’ve gotten Khomeini (R.A.) too. The vilest devils, truly.

What the MEK fails to grasp however, much like its Yahoudling overlords, is that the Islamic Revolution is Husseini and it is not weakened by its martyrs but strengthened. The sacrifice of every Shahid instantly becomes another layer of armor surrounding the Moustazafeen like clouds surrounding an already-lush forest and protecting it from over-exposure to harsh and harmful rays. And you’d be hard-pressed to find stronger armor than Ayatollah Ata’ollah Ashrafi Esfahani (R.A.) Feeling like you’re slipping into depression? Look to him. Feeling overwhelmed in your own defensive war against Dajjal? Look to him. Need strength in the sometimes all-consuming conflict with the hypocrites? Look to him. Need light as you wade through the rivers of darkness that rush through this Judaized world with rapid fury? Look to him. Imam Khomeini (R.A.) most certainly did. And whoever is a source of strength for the Imam is a source of strength for us.

Scholar. Revolutionary. Soldier. Mouqawamist. Saint. Giant. Martyr. What’s an MEK grenade to an individual with the stature of Esfahani (R.A.)? Long after Maryam Rajavi and her abominable cult are gone, Ayatollah Ashrafi’s (R.A.) Nour will live on. In us. In the pantheon of heroes. In every revolutionary to come. In the Heavens. All World Zionism and its MEK mercenaries killed was a physical body. The reverberations of his sanctified life will echo forever. Rest in might, rest in light o’ remarkable, irreplaceable and incandescent Shahid.