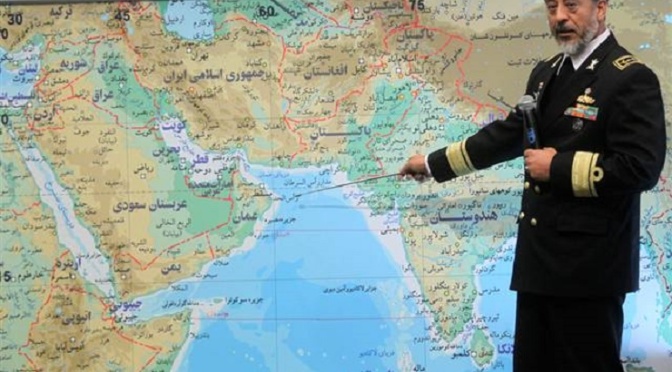 “The torpedo can be fired by submarines, vessels and air defense systems,” Sayyari said in a press conference in Tehran on Saturday.

Sayyari further stated that the torpedo will be used in action in upcoming navy drills in coming months.

Senior Islamic Revolution Guards Corps (IRGC) officials announced in May that the IRGC Navy is equipped with state-of-the-art weapons and vessels, and is one of the only two world military forces equipped with a unique torpedo which moves with unbelievable velocity.

Speaking to FNA, IRGC Navy Commander Rear Admiral Ali Fadavi said when the home-made missile/torpedo, Hout, was displayed in a series of wargames a few years ago, over 2,000 world media covered the news.

He said the speed of the missile is 100 meters per second (360km/h) under water.

The Admiral explained that the gruesome weapon has originally been made by the Russians, adding that Americans have spent a sum of 20 billion dollars in 15 years to develop its technology, but failed.

The Russians call the torpedo Shkval. The speed of this missile or torpedo far exceeds that of any standard torpedo currently fielded by NATO. This speed is a result of supercavitation: the torpedo is, in effect, flying in a gas bubble created by outward deflection of water by its specially shaped nose cone and the expansion of gases from its engine. By keeping water from coming into contact with the surface of the body of the torpedo, drag is significantly reduced, allowing extremely high speeds.

The Russians started designing it in the 1960s when the NII-24 research institute was ordered to produce a new weapon system capable of combating nuclear submarines. In 1969, the GSKB-47 merged with NII-24 to create the Research Institute of Applied Hydromechanics in Kiev, Ukraine (constructor Merkulov); the Shkval being a product of this merger.

Announced as being deployed in the early 1990s, although previously operational as early as 1977, the Shkval is designed as a countermeasure against torpedoes launched by undetected enemy submarines. It may also be used as a counter to incoming torpedoes whereby it is launched at the enemy submarine, forcing it to evade, and hopefully cutting the guidance wire to the enemy torpedo in the process.

Launched from 533 mm torpedo tubes, the VA-111 exits the tube at 50 knots (93 km/h). Shortly afterwards, its liquid-fuel rocket ignites and propels it to speeds of up to 200 knots (370 km/h). Some reports indicate that speeds of 250+ knots may be achieved, and that work on a 300-knot (560 km/h) version was underway. The rocket engine uses a combination of high test peroxide and kerosene; the propellant tanks contain about 1500 kg of hydrogen peroxide and 500 kg of kerosene.

The torpedo controls its direction using four fins that skim the inner surface of the supercavitation envelope. To change direction, the fin or fins on the inside of the desired turn are extended, and the opposing fins are retracted. To make faster turns, the push plate on the nose can be used to control the shape of the bubble the missile is traveling in.