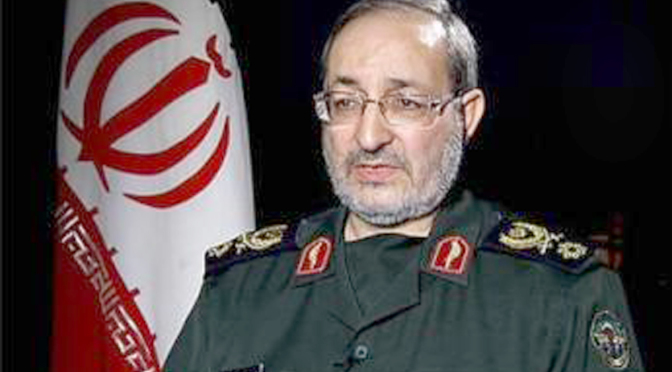 The US delivered arms and aid supply to militants of the Islamic State of Iraq and Syria (ISIS) in eastern Iraq, Deputy Chief of Staff of the Iranian Armed Forces Brigadier claimed on Saturday, according to a report by the Iranian state news agency IRNA.

Describing the US’s fight against ISIS as a “lie,” General Massoud Jazayeri Jazayeri said “the US and the coalition air dropped weapons, ammunition, food and medical equipment to ISIS militants – which have been besieged by the Iraqi army – in Jalawla town of Diyala [in eastern Iraq] a few days ago.”

Jazayeri claimed that the US supported ISIS, currently in control of large swathes of territory in Iraq and Syria, since the beginning of the insurgency.

Iran and other critics opposed to US involvement in the conflict with ISIS have pointed out that Washington in partnership with its Gulf allies, including Saudi Arabia, played a role in the formation and expansion of extremist groups like ISIS by arming, financing and politically empowering armed opposition groups in Syria.

In a speech mid October, Iran’s supreme leader Ayatollah Ali Khamenei said that “America, Zionism, and especially the veteran expert of spreading divisions – the wicked government of Britain – created al-Qaeda and Da’esh (ISIS) in order to create divisions among Muslims.”

“A careful and analytic look at the developments reveals that the US and its allies, in efforts that are falsely termed countering Daesh, seek to create division and enmity among the Muslims rather to destroy the root causes of that (terrorist) current,” Khamenei said.

THe US-led international coalition, which includes France, Germany, and Saudi Arabia, has carried out numerous airstrikes against ISIS in Iraq and Syria. However. the airstrikes have not been effective so far.

In September, Iranian President Hassan Rouhani told the United Nations that the West was responsible for “strategic blunders” in the Middle East and Central Asia that had created terror havens.

In a thinly veiled reference to the United States and Israel, Rouhani blamed the rise of violent extremists on outsiders.

“Certain intelligence agencies have put blades in the hand of madmen (ISIS’s extremists), who now spare no one,” he said.

Moreover, Iran believes US and Britain are using the Islamist threat to justify their renewed presence in the region.

“Experience of creation of al-Qaeda, Taliban and modern extremist groups demonstrated one can’t use extremist groups to counter an opposing state and remain impervious to the consequences of rising extremism,” he said. “The repetition of these mistakes despite many costly experiences is perplexing.”

Iran’s accusation appeared to be reference to Western support for the so-called rebel forces fighting the Syrian army and government.

Amongst the rebel forces, hardline Islamists are militarily the strongest.

Wasn’t Da’esh (ISIS) the same group who fought the Syrian government and the Syrian army? How is that they were not categorized as terrorists then?” and “Why is it that ISIS went from not-so-bad to extremely-bad depending on who they targeted in their terrorist operations?” Rouhani asked.

A study by the London-based small-arms research organization Conflict Armament Research revealed that ISIS jihadists in Syria as well appear to be using US military issue arms and weapons supplied to the so-called moderate rebels by Saudi Arabia.