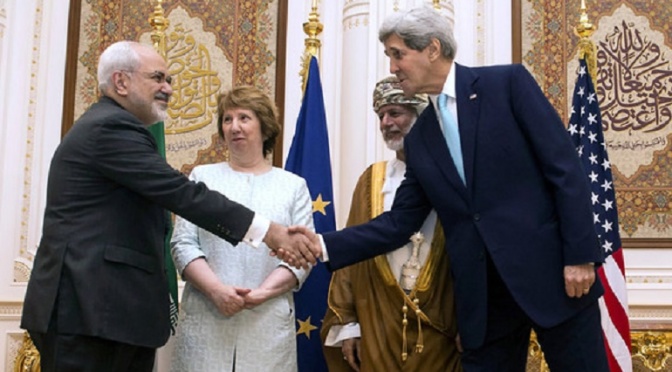 The head of Iran’s parliamentary nuclear committee said during the latest nuclear talks in Oman that the United States presented an 8-page recommendation that took the nuclear negotiations between Iran and the five permanent members of the UN Security Council plus Germany (P5+1) “back to zero.”

In an interview with Tasnim News Agency, Ebrahim Karkhaneh said that during the Nov. 9 trilateral talks between Iran’s Foreign Minister Mohammad Javad Zarif, US Secretary of State John Kerry and former European Union foreign policy chief Catherine Ashton a proposal was recommended by the United States that would turn Iran’s nuclear program into nothing more than “decoration.”

Karkhaneh claimed that with the recommendations, the United States had “thrown off the equations in the negotiations” and called it a “nuclear Turkmenchay treaty,” referring to the 1828 treaty in which Iran signed over territories to Russia after military defeats. According to him, “without a doubt” Iran’s negotiators would not agree to these terms.

While Karkhaneh did not specify the number of centrifuges recommended by the United States, he said that it was a “decorative spinning of centrifuges.” Iran currently has 9,400 spinning centrifuges. Iran Nuclear, a website close to former nuclear negotiator Saeed Jalili, reported that in the Oman talks, Iran was offered 4,500 centrifuges. This has not been verified by any other source and the website in general has had a hard-line view with respect to the negotiations.

Karkhaneh said that Iran would also be limited to “research and development to [first] generation centrifuges.” These would be IR-1 centrifuges, which are based on a 40-year-old European design.

Iran’s Supreme Leader Ayatollah Ali Khamenei, who has a final say on the nuclear program, has previously said — without offering a timetable — that ultimately Iran needs 190,000 separate work units (SWU), which at the IR-1 generation would be 190,000 centrifuges. If Iran is offered newer generation centrifuges that produce more SWU per centrifuge, this could require a far lower number of centrifuges.

On other points presented at the Oman talks, Karkhaneh also said that the United States proposed a “long-term suspension” of the Arak heavy water reactor “under the excuse of redesigning and changing it to a light water reactor.” Under the US proposal there would also be “unlimited and intrusive inspections of all the nuclear sites,” which according to Karkhaneh, would “include military sites.”

He said that years before parliament had already issued a statement with the signature of 200 members of parliament stating that Arak and Fordow should reach self-sufficiency and that any limitations on research and development and inspections by the International Atomic Energy Agency beyond what is required by the Non-Proliferation Treaty (NPT) is not acceptable. For Iran to accept additional NPT protocols it would need to be ratified by parliament.

Karkhaneh said after one year of nuclear negotiations, these recommendations by the United States “would completely suspend the nuclear progress of Iran” and “destroy a considerable part of nuclear stockpiles,” and thus the recommendations has brought the nuclear negotiations “back to zero.” He added that there is still time for Iran’s negotiators to “decisively defend the nation’s nuclear rights.”

One of the main sticking points in the talks is the manner in which sanctions would be removed. Karkhaneh did not address this in his interview. Many Iranian officials have said they want all nuclear-related sanctions removed. The article by Iran Nuclear claimed that one of the US proposals for removal of sanctions was a 10-year plan for removal of part of the sanctions. This information was not verified by other sources.