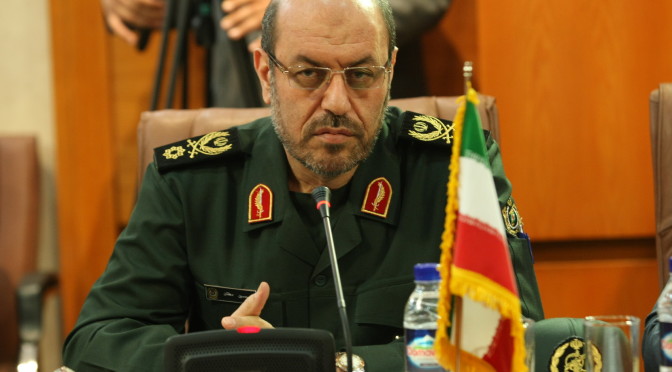 The regional rivalry between Iran and Saudi Arabia has pitted the two countries against one another in Lebanon, Syria and Iraq. But it is Yemen that has caused the two countries to escalate their war of words to unprecedented levels. When Saudi Arabia and its coalition of Arab countries began bombing Yemen in late March, they claimed they were targeting Houthi militias, which they accused of being supported by Iran. Checking Iran’s expansionist aims was one of the key talking points by the Saudi-led coalition.

At a security conference in Moscow on April 16, Hossein Dehghan, Iran’s defense minister, said, “The Saudi government, which undertook this military invasion with the help of America and Israel and intelligence help from some regional countries, not only will not achieve its own illegitimate goals, but has provided the grounds for its own collapse and irreparable failures and a similar fate of that of Saddam [Hussein] is awaiting it.”

He added, “The Saudi government should know that by supporting financially, logistically and by training of takfiris and terrorists in Syria, Iraq, Afghanistan, Central Asia and the Caucuses, and attacking Yemen while preventing humanitarian aid, will not turn it into an important country in the region.” Dehghan said that Saudi Arabia will become an important country in the region when it can unite Muslims and bring together the different sects, given that they are the custodian of the two holy mosques in Islam.

Saudi Arabia has fought with Houthis along its southern border in the past. The Saudis have long viewed Yemen as a part of their sphere of influence. Iran seemingly has no strategic interests in Yemen, but its media has not been shy about supporting the Houthis, who are reportedly in an alliance with former President Ali Abdullah Saleh and his forces.

Yemen’s deposed President Abed Rabbo Mansour Hadi, who is currently staying in Saudi Arabia, has expressed support for the Saudi-led bombing. There are also a number of other competing groups in Yemen, including the terrorist group al-Qaeda in the Arabian Peninsula, which has used the bombings to regroup and strengthen its position. According to the United Nations Office of the High Commission for Human Rights, 364 civilians have been killed since the bombings began.

Iran has presented a peace plan and called for a cease-fire, which Saudi Arabia rejected. The Saudi ambassador to the United States said April 15, “Iran, the last time I checked, does not have a border with Yemen.”

The war of words also seems to be spreading beyond Iran and Saudi Arabia, as officials in Lebanon have exchanged accusations. After Lebanese Interior Minister Nouhad Machnouk personally attacked Khamenei for criticizing Saudi Arabia’s bombing of Yemen, Hezbollah responded in a written statement.

Machnouk blamed Iran for all the region’s problems and accused Khamenei of shedding crocodile tears for Yemen. He also said that Yemen’s bombing has ushered in a “new Arab era.” In response, the Hezbollah statement called Saudi Arabia “the prime source of terrorism in the region” and accused it of inciting sectarianism.