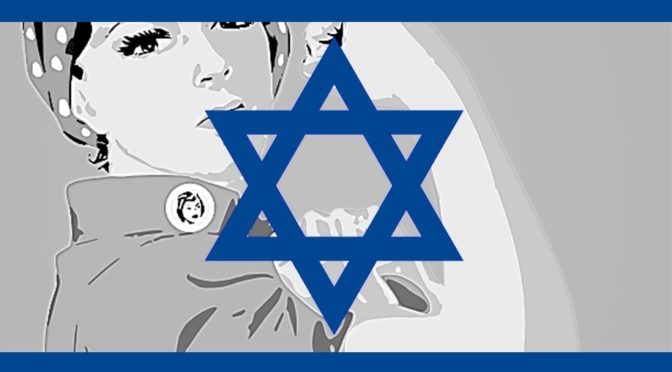 It began as “National Women’s Day” or “Woman’s Day” in February 1909, and its originator was Theresa Serber Malkiel, a Russian New York Jewess who is widely lauded today as a pioneeress in Jewish labor movements and was radicalized into secular extremism by the United Hebrew Trades. She helped found the largely Jewish socialist paper known as the “New York Call” and became a regular columnist in the Zionist/Communist Jewish Daily Forward, helping propel it into prominence. Malkiel is said to have been fleeing “anti-Semitic” violence, but her middle-class and educated background casts doubt on this assertion. And while she pranced around as a “universalist socialist”, the reality of the matter, typically, is that it was Jews and just about Jews alone in which she was concerned about. The fact that Vice News, owned predominantly by Zionist Jew David Bonderman’s TPG Capital and Chabadnik Murdoch’s Fox, is heaping praises upon her as if she is some sort of angelic being, should confirm beyond all doubt that she wasn’t someone which any truly revolutionarily-minded person should find themselves in league with.

Picking up on Malkiel’s example was the International Socialist Women’s Conferences, which made it a point to bring it up every year they convened in the hopes of turning Malkiel’s “national” day into an international spectacle. The 1915 conference in Switzerland’s Berne was special because of just how many Jewish personalities spearheaded the respective delegations from each country. And if they weren’t Jewish, then they were Jewish proxies.

Germany was led by Clara Zetkin (aka Clara Josephine Eissner), Secretary of the International Bureau of Socialist Women and a Jewess by marriage, as she had married the Russian-Jewish communist-extremist thinker Ossip Zetkin and bore him two sons who’d she raise Jewish, Maxim and Kostja. Toni Sender (aka Sidonie Zippora Sender), an Orthodox Jewess and daughter of a prominent Jewish capitalist, was her right-hand woman. The British group was led by the Jewish Labour Party politician Marion Philips. Russia had two groups, the Mensheviks, led by wealthy Russian-Jewish-Italian aristocrat Angelica Balabanoff, the Comintern’s Secretary from ’19-’22, and the Bolsheviks, led by Lenin’s liaisons, Inessa Armand and Nadezhda Krupskaya–non-Jews but very much tools of the overall Sanhedrin agenda. The presence of these individuals is documented in the tedious work, “The Bolsheviks and the World War: The Origins of the Third International”, by Harold H. Fisher and Olga H. Gankin, both of whom are Jewish.

Also involved directly in the conference and steering its agenda were Lenin himself and his close aide, Karl Radek aka Karol Sobelsohn, a Lithuanian-Ukrainian Jew famous for his loyalty to the October “Revolution” father and his associations with the Jewish terrorists Leon “Leo” Jogiches and Rosa Luxemberg, as well as Jakub “Commie Moneybags” Fürstenberg (known also as Yakov Hanecki/Ganetsky). Lenin and Radek bizarrely called on women to support opposition to WW1 while not condemning any of the official Socialist organs for underwriting this very conflict, nor laying out a plan to demonstrate against the war powers. This too can be uncovered in the aforementioned volume by Fisher and Gankin. Following the toppling of the Tsar and the ritual murder of the Romanov family, Lenin would declare “International Women’s Day” an official Soviet holiday. Contrary to leftist propaganda and smearing of the following fact as “anti-Semitic” and “fascist”, Lenin absolutely was of Jewish origin and he kept it secret to avoid “persecution”. Declassified KGB papers prove it. Additionally, it needs to be noted that Lenin’s cohort and eventual bitter rival, the Zio-butcher Leon Trotsky aka Lev Davidovich Bronstein, also played a role in laying the intellectual groundwork for the “holiday” to come to be.

Now, whether you read the history from the “underground”, esoteric perspective of Juri Lina’s “Under The Sign Of The Scorpion”, albeit one rooted in rigorous documentation as it was comprised from declassified Estonian intelligence files, or the arrogant, mainstream Jewish perspective of Yuri Slezkine in his “Jewish Century”, or even if you hear it directly from the chops of Russian President Vladimir Putin, a man very much in the know, it is a certified, verified, irrefutable fact of history that the Bolshevik Revolution was led, driven and staffed largely by Jews.

And while brushed off by the Zio-establishment as a “conspiracy theory” and a “manifestation of Jew-hate” as a means of deterring the dissemination of Haqq, it is also a certified, verified, irrefutable fact of history that, as evidenced by none other than the Sulzberger-owned New York Times, Bolshevism was bankrolled by Jewish money–that of the aforementioned Fürstenberg as well as the shadowy, Jewish-Zionist, capitalist-millionaire, German-intelligence-backed intriguer Israel Lazarevich Gelfand aka Alexander Helphand bka Parvus. They used condoms and lead pencils to mask their fundraising. And though the actual numbers have been badly inflated by anti-communist ideologues to score political points through the years, it is yet again, part of history’s fabric that millions of Christians and Muslims were murdered at the hands of these Zio-bankrolled, God-abhorring Judeo-Bolsheviks in gruesome, gruesome fashion.

Why is all of this being noted? Because how can persons this genocidal, this hateful, this… FILTHY… be taken seriously in regards to their “solidarity” with women and their “celebration” of the female aura when they were busy repressing, raping and massacring Christian women, Muslim women and any woman who didn’t want to submit to the newly minted godless regime? It’s a farce. And this… THIS, ladies and gentlemen… is why International Women’s Day should not only be rejected but repealed. Entirely. Moreover, starting with the exact moment International Women’s Day was institutionalized, it has become a mobilization mechanism for the most extreme expressions of liberal/leftist praxis–from the Jewish-driven Frankfurt School, to Jewish-driven Western feminism that is also heavily rooted in Zionism, to Jewish-driven abortion “rights” movements. It has nothing to do with the uplifting and empowerment of women, and everything to do with the molding of women into victimhood-obsessed, de-feminized, man-hating, hyper-sexualized, “gender-fluid”, degenerate agents of Dajjal–whether in the neo-atheist confines of Communism, or the neo-pornographic stratagems of Capitalism.

Famed African-American revolutionary Nashid Abdul Khaaliq (R.A.) said often, “Liberation cannot and will not come from an unclean hand.” It is on that profound point that this piece was written. A colonized mind might have jumped to conclusions based on the essay’s title or its opening paragraph, and thought that this writer is “patriarchal” and a misogynist. Far from it. Rather, I’m an anti-Soviet, anti-Bolshevik, Anti-Parasitic Khomeiniist who doesn’t attach any alien elements to my Shi’a Islamic ideological framework. Indeed, not only SHOULD women be celebrated in all their splendor, for all their intelligence, kindness, beauty inside and out, grace, faith, complexity and unmatched strength, they MUST be. Imam Khomeini (R.A.) once declared that women are the molders of society. Global Zionism is aware of this too and that’s why its aim is to transmogrify women into upenders of society instead, fully disconnecting them from their organic roles as care-givers, mothers, builders, teachers, revolutionaries and simply put, backbones of any healthy nation. We don’t need a Jew-birthed, Soviet-enshrined ball of hypocrisy to commemorate everything wonderful that is woman–ALLAH’s (SWT) most magnificent creation.

The Islamic world already has such an event anyway. Lady Fatima’s (A.S.) birthday is celebrated as a Women’s Day in Iran, Lebanon, the Shi’a areas of Nigeria, Yemen, Iraq and parts of Pakistan and Afghanistan. It should be celebrated throughout the rest of the Islamicate and if it wasn’t for Saudi-imposed Wahhabi-Takfirism on the one hand, and Zio-Imperialist collaborators trying to appear more “Western” on the other, it would be. The Zahra (A.S.) is and was Paradise Born, Paradise Made Flesh, and the role model for all women. What is her birthday but the EMBODIMENT of Women’s Day? On top of that, we should have additional Women’s Days for Lady Khadija (A.S.), Lady Maryam (A.S.), Lady Asiya (A.S.), Lady Zaynab (A.S.) and Lady Hamida al-Khatoun (A.S.)–all as a means to raise the Karbala Consciousness of our people, erase the misogynistic stereotypes falsely associated with Islam, increase the knowledge about these women who there’d be no Deen without, and to combat the two-sided Judaic coin of Capitalism and Communism.

Going deeper, just as Hizbullah founded Saraya al-Mouqawamah to build national unity and cater to those who wanted to fight the usurping Zionist entity, but who weren’t committed to the Shi’a Islamic Liberation Theology of the Resistance, there should be yet another Woman’s Day for those who fight Empire Judaica in their own way minus overt religious motivations. Such a day would be perfect for the likes of Syrian First Lady Asma al-Assad, who is currently struggling against breast cancer while continuing to serve her country against Zio-Imperialism daily, Algerian heroine Djamila Bouhired, Palestinian lioness Leila Khaled, American Anti-Zionist martyr Rachel Corrie (rip), Japanese-American firebrand Yuri Kochiyama, legendary Lebanese militant Souha Bechara, the equally legendary Lebanese SSNP fighter Ibtissam Harb (R.A.), and many, many more from all over the world.

And since Syria in particular has had a woman’s movement going back to 1919, with anti-French, anti-Ottoman Naziq Khatim al-Abed Bayhoum (R.A.), the first woman honored with the rank of General in the Syrian Arab Army, featuring most prominently in that struggle, this newly inaugurated Women’s Day could be set for April 18th annually, one day after Syria kicked out the last French occupier. Syria is a much better flag-bearer for such a Woman’s Day than the accursed Soviet Union which, its sloganeering aside, had no problem throwing its full weight behind the bombing, shooting and maiming of Iranian women by Saddam Hussein in the Imposed War against the nascent Islamic Revolution.

To finish, we have to note that the very concept of a single “Women’s Day” is rooted in the very idea of “patriarchy” that feminists claim to be fighting. So men get to have 364 days out of the year to celebrate and be celebrated for whatever reason while women get one alone? How is this “equality”? How is this “fair” or “victorious”? Women should be saluted, respected, loved, protected and cherished daily–with the seven Women’s Days discussed above being mere icing on the cake. We, as Officers in the Soft War and defenders of the Resistance Axis, know this in our bones. For there’d be no First Intifada if it wasn’t for Palestinian women. There’d have been no Lebanese Islamic Resistance period without the power and sacrifices by Hajjeh Amina al-Salameh (R.A.) There’d have been no revolutionary progress in Iraq, for men or women, if it wasn’t for Sayyeda Amina Haydar al-Sadr (R.A.) And it goes on. YES to celebrating women. 100%. All day, everyday. NO to doing it through a Jewish-Soviet lens rooted in hypocrisy, subversion, genocide and Anti-Christ, Anti-Maryam hate. Capeesh? Good. Glad we’re clear now. Salaam.