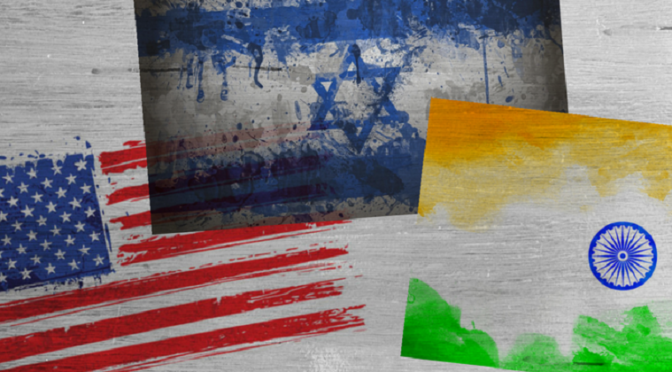 On March 10th, Elliot Abrams, the leader of the coup in Venezuela, told Reuters in an interview that he is “arguing, cajoling, urging” India to cut off ties with the democratically elected, wholly legitimate Maduro government. He told New Delhi outright, “We say you should not be helping this regime. You should be on the side of the Venezuelan people.” As Reuters notes in its piece, “The Indian market is crucial for Venezuela’s economy because it has historically been the second-largest cash-paying customer for the OPEC country’s crude.” Second behind whom you ask? Only the American ZOG. Which means if Venezuela doesn’t have access to the Indian market, total financial collapse very well may be right around the corner.

Just about 48 hours later on March 12th, Bolton and Pompeo joined the threats-party and the Hindu supremacist regime decided to start abiding by Abrams’ orders, issuing warnings against Indian oil companies to stop importing Venezuelan crude. These firms would face “undisclosed consequences” if they didn’t listen to the Modi ZOG.

Information in the media, both in the West and South Asia, was scant over the next 10 days. But then, on March 22nd, the big news came in from Oil Price, the world’s top energy news website: India and all Venezuelan-connected Indian private energy outfits were no longer taking in Venezuelan petrol.

And for the big finish, just about a week following the revelation, Elliot Abrams was back in the news, grinning ear to ear and declaring, “We are very happy to see” the “very considerable amount of cooperation” from India and Indian companies with relation to Venezuela. The Jewish supremacist war criminal was all but in an orgasmic state.

New Delhi has sold Caracas down the river. It cannot be read any other way. And noting just how much money was at stake at this critical juncture for the Venezuelan people, government and economy–tens of billions of dollars at least, perhaps upwards of $100 billion plus–we can rightly say that India is now a party to the US-EU-Zionist war on the Bolivarian Revolution. Just as India is a party to the economic war on Iran. Indeed, India can’t and won’t buy oil from the Islamic Revolution unless it gets a go-ahead from Washington. Thus, if, or better still, WHEN the American ZOG tells Hindutva to break ties with the Iranian nation completely, Modi and the rest of his BJP-RSS-VHP gang most certainly will.

Prior to closing, it must be noted that while India was allowing itself to be commanded like a show-dog is commanded by its trainer, its representatives were laying a heaping dose of praise upon the fake Jewish “state” at the AIPAC conference and inaugurating Indian-‘Israeli’ initiatives in the fields of medicine and artificial intelligence. Obeying the American wing of the Rothschild Imperium on the one hand and increasing friendship with the ‘Israeli’ crown of the Rothschild Imperium on the other. This is India. Now Venezuela, a long-time target of the Hindutvadis’ Zionist partner-in-crime, feels the betrayal that Kashmiris, Dalits, Indian Muslims, Indian Christians, Indian Sikhs, the Naxalites, Pakistanis, Palestinians, Nepalese, Sri Lankans, Bangladeshis and others have been reeling from for decades. Shameful isn’t even the word. To be honest though… What else is to really be expected from a bunch of fanatics who drink cow urine and hold festivals centered around the throwing of cow dung? Absolutely despicable.