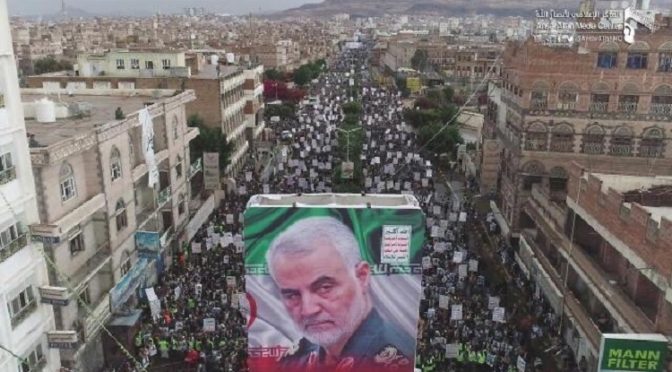 This is another crushing blow to the hasbara being spewed by Western ZOGs and Zionist press outlets about the lack of sympathy regionwide for the martyrdom of Hajj Qassem Suleimani (R.A.) What poppycock. What balderdash. What delusions! Get your heads out of your mazes of propaganda, colonialist clowns! Wherever there is truth, justice and resistance, you will find longing for the Knight of Kerman (R.A.) and his counterpart, the Beam of Basra (R.A.) Wherever there is disdain for oppression and opposition to Zio-Imperialism, you will find the faces of these Legends smiling upon the dissidents. And wherever there is Taqwa and Yaqeen, you will find the essence of Hajj Qassem (R.A.) and Abou Mahdi (R.A.) infused into the foundations of those rising Islamic currents. There is no better exemplification of these facts than Yemen.

Assuredly, we wonder not why the Holy Prophet Muhammad (S.A.W.W.) put special blessings on Yemen, declaring that the “best of men are the men of Yemen”, that “belief is Yemeni”, and even describing himself as Yemeni. Furthermore, Rasoulallah (S.A.W.W.) said, “The people of Yemen are on the verge of ascending upon you as if they are clouds. They are the best (people) on Earth.” Thus, if the Ascending Clouds love you… You must have done something right. And as ALLAH (SWT) as our Witness, there have only been a handful in modern Islamic history as right as Suleimani (R.A.) and Al-Mohandes (R.A.) May the Divine Fashioner (SWT) illuminate their souls and raise their stations to the highest heights in Jannah. And may that glimmer be so luminescent that the light at the end of the tunnel on our road to triumph reaches its brightest point.