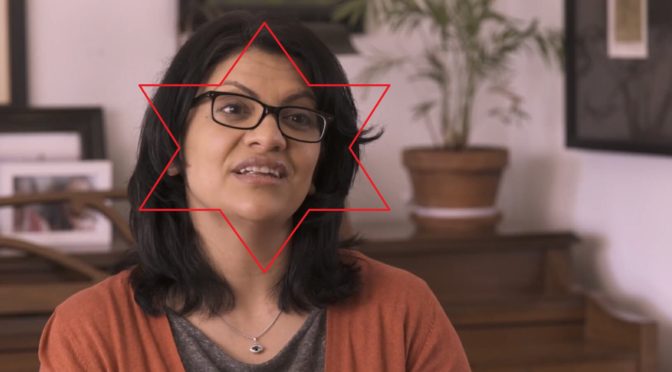 Let’s set aside the fact that Tlaib is a fraud to begin with. Her entire political career was shaped by Zionist Jew Steve Tobocman, a wealthy and influential Michigan mover-and-shaker who spearheaded her recent victorious congressional campaign. She fraternizes with the worst and most sectarian Ikhwanjis of Saudi/Qatari/Emirati-financed CAIR, including the murderous Hussam Ayloush. She’s friends with the devilish Linda Sarsour, who’s very much ingratiated with the Jewish Power Configuration on numerous different levels. She’s taken hundreds of thousands of dollars from the Open Society Institute of George Soros and is a director at the Sugar Law Center, founded by pro-Soviet Jews Maurice and Jane Sugar. She was endorsed by liberal Zionist powerhouse J Street, willingly took its money, and only did a 180 because she came under pressure from her own constituents who held her feet to the fire. Nevertheless, she has maintained a flowery, subservient language that puts ‘Israeli’ colonizers and Palestinians in the same boat as if there is any such moral equivalency.

Simple and plain, she’s a product of Organized Jewry, as no real Palestinian/Arab/Muslim/activist/decent human being takes money from its coffers. Only creatures of that very force on a mission to hoodwink their own brethren do. Driving that point home further, it’s also more than telling that clear positions on major Arab-Muslim issues like Yemen and Syria are conspicuously absent from Tlaib’s platform. If the company she keeps is any indication though, she no doubt stands with Al-Saud and the Takfiriyeen, not Yemenis and Syrians.

Let’s also set aside the fact that regardless of all Trump’s crimes, specifically in Yemen, Iran and Venezuela, and his capitulation to ‘Israel’ on many matters, he clearly has an isolationist streak and is attempting to act on it by putting a US withdrawal from Syria in motion as well as a draw-down in Afghanistan. Hence the pushback he’s receiving from the entire neocon warmongering machine. If Trump ACTUALLY gets impeached, the fanatical “Christian” Zionist Mike Pence will take his place and move forward with policies on the Islamicate, Africa, Ukraine and the Korean Peninsula that can accurately be described as catastrophic. That anyone would think of supplanting the Orange Oaf with THIS, is, for a deliberate lack of a more eloquent phrase… Batshit crazy.

On that note, talk of “impeaching” Trump isn’t “hardcore”. Nor “edgy”. Nor “brave”. It’s integral to the entire Democratic discourse, fueled by the Zionists who control the more liberal channels of the mainstream press. It’s a central pillar of Russigate, which the Yahoudling-dominated media has used to deflect attention off ‘Israel’ from day one. By stating what she stated, irrespective of the “spice” of the cussing, Tlaib simply solidified how much of an establishment tool she is. Another native informant completely in line with the ongoing strategy of the Empire to give more and more minorities – Muslims particularly – a seat at the table of hegemony so they don’t get too “radical” and find themselves on the side, both morally and politically, of the Resistance Axis. No Democrat, especially Brown and Black Democrats, for example, would have said “impeach that motherf&%&%r!” about Obama, despite the fact that this war criminal weaponized the Takfiri scourge across the Maghreb and Mashreq while laying waste to Libya, Syria and Yemen in the process. He oversaw two Zionist wars on Gaza too. In their eyes, such savagery gets a pass. And even with Trump, the drive to impeach him isn’t about his own Obama-like excesses and his services to the Empire, but because he’s a bigot, a misogynist and a “slave of Putin”. It’s a terribly brain-bending, intellect-shrinking scam.

If Tlaib really was… Hardcore… Edgy… And most of all, brave… She’d say “Death to ‘Israel’!” Because the end of the Tumor putrefying her homeland and the whole of our region is the only TRUE way to TRUE salaam–not a “one state solution” or a “two state solution”, both of which grant usurping, invading terrorists the same rights as the indigenous. Coupled with that truth, as an American and a Michigan resident at that, she should want to take the 13 billion dollars a year sent to ‘Israel’ – between military aid, loan guarantees and congressional pork, as per the revelations of Zionist Lobby gun-for-hire Martin Indyk over 20 years ago – and give that back to the US, chiefly the people of Flint who are still without clean water. Keeping that in mind, she’d also scream out from the rooftops, maybe with some swearing too, that “Zion Did 9/11!” After all, 9/11 not only gave birth to the Orwellian Global War On Terror (GWOT) and the “New Middle East” project of ‘Israel’ and its neocon auxiliaries, setting the entire world on fire and falsely pitting Islam and Christianity – in other words, the sons of Christ (A.S.) – at each other’s throats, it also gave the artificial Zionist regime the cover it needed to launch its campaign of barbarity against the Palestinian people – HER people – during the Second Intifada. 9/11 is the litmus test for all legitimate truth-seekers and defenders of humanity. Speak up on it and we know you’re real deal Holyfield. Ignore it or duck it and we know some Shlomo somewhere foots your bill.

End of the day, Tlaib is what my dear sister and teacher, the Palestinian luminary Nahida Izzat, calls a “Kosher Palestinian“–a moniker that can be extended to Kosher Arabs, Kosher Muslims, Kosher Christians and Kosher Gentiles generally. We’re talking about the cream of the Shabbos Goy crop– those who are most oppressed by Global Zionism but still serve it loyally and unabashedly. House Arabs and House Muslims par excellence. She serves not the Palestinian cause nor the American people (as brainwashed and far-gone as the overwhelming majority may be) but Dajjal. Beware those who claim to speak in the name of Islam and swear they’re agents of justice when in fact they are doing damage to Islam for they are agents of Islam’s greatest enemy. “Impeach that motherf%&%&r!” she says. Hilarious, we retort. “Death to ‘Israel’!” and “Zion Did 9/11!” we scream. And to hell with the Rashida Tlaibs, Ilhan Omars and Alexandria Ocasio-Cortezes of this vomit-inducing excuse for a “resistance”, along with their equally puke-triggering, Zionized identity politics. They’re the very LAST thing the Moustazafeen need as the struggle for liberation from the Zionist Imperium rages on.